Blood loss; wound caused by Jonathan Irons with an Atlas 45

"Tough as nails and loyal to a fault, Sergeant Cormack is a grunt if there ever was one. He was a squad leader in the Marines for years, until he was asked to lead the Sentinel Task Force. Now, he tirelessly pursues those who would harm America, at home or abroad."
— Cormack description on the official Call of Duty website

Major Cormack is a main character in Call of Duty: Advanced Warfare. He was Mitchell's squad leader during his time in the Marines before becoming a leading member of an elite U.S.-led multinational special ops team called the Sentinel Task Force. He is a kind and good-hearted man with a strong sense of honor and duty as he cares greatly for his men. He is the announcer for the Sentinel Task Force in multiplayer.

Cormack is Mitchell's squad leader in the Marines. He takes part in an operation to repel North Korean forces during their invasion of the South Korean capital, Seoul, where he is grouped with Mitchell, Will Irons and Jackson. Their objective is to take out a North Korean gunship with the assistance of a demolitions squad, but by the time they rendezvous with the demolitions team, they are all KIA. Cormack orders Mitchell and Will to destroy the gunship themselves and, although they are successful, Will is killed and Mitchell is severely wounded, losing his left arm. Cormack saves Mitchell's life as they pull out of the region.

Back in the United States, Cormack gives a speech at Will's funeral. A recently discharged Mitchell also attends and is offered a job at Atlas by Will's father, Jonathan Irons. Cormack tries to intervene and dissuade Mitchell from joining, but is met with scorn from Jonathan. Mitchell does join Atlas and does not see Cormack until five years later.

Foundation of the Sentinel Task ForceEdit

Whilst Mitchell is operating under Atlas, Cormack becomes one of the founding members of the Sentinel Task Force, a U.S. led multinational special ops team formed to investigate the KVA attacks of 2055. However, their priority soon shifted to investigating Jonathan Irons and Atlas, which had quickly become the most powerful corporation in the world and the world's largest standing military force.

Rescuing Mitchell and Ilona from AtlasEdit

After Mitchell and Ilona discover that Irons deliberately covered up a prior warning to the 2055 terrorist attacks in order to make a profit from the aftermath, they are taken into Atlas custody on Jonathan Irons' orders. Cormack, under a secret identity, helps them escape, and once they are in the clear he reveals himself to Mitchell and recruits both Mitchell and Ilona into the Sentinel Task Force.

With Mitchell and Ilona on the side of Sentinel, Cormack assigns them to infiltrate Irons' private estate in Bangkok to find intel on an upcoming Atlas operation called "Manticore". They discover that Manticore is a biological agent that only affects people whose DNA is not on the Atlas databases. Mitchell and Cormack tag an Atlas cargo plane transporting a large shipment of Manticore to Argentina, and bring it down over Antarctica.

In Antarctica, additional Sentinel troops assist in securing the shipment of Manticore, but they are ambushed by orbitally-deployed Atlas troops. Mitchell, Ilona and Cormack manage to evade the Atlas troops and attempt to re-secure the cargo, but are held at gunpoint by two Atlas soldiers under Gideon's command. Gideon betrays Atlas and kills the two soldiers before helping Cormack and his squad in securing a sample of Manticore and destroying the rest of the cargo.

Destroying the Manticore Factory and Attack on San FranciscoEdit

Gideon joins the Sentinel Task Force and assists Cormack's squad in destroying an Atlas bio lab in Bulgaria that is producing Manticore. Shortly afterward, Irons is inaugurated into the United Nations Security Council, where his first action is to deliver a scornful speech to the United Nations and Irons effectively declares war on the governments of the world, believing their nations to be better off under Atlas control. Irons orders an attack on the U.S. Third Fleet in San Francisco, which Cormack sends Mitchell and Gideon to stop. The attack succeeds as the Golden Gate Bridge is destroyed in the process, resulting in the deaths of thousands of civilians, police and Sentinel personnel. With a large U.S. Navy carrier under siege from Atlas, Cormack and Knox join Mitchell and Gideon in the field and regain control of the carrier, destroying all the incoming Atlas forces in the process.

After the disaster in San Francisco, Sentinel launches a massive assault on Irons' compound in New Baghdad, Iraq. Cormack stays outside the city whilst Mitchell, Ilona, Gideon and Knox lead an attack inside the city. Just as it looks like the Atlas forces are beginning to fall, Irons deploys Manticore, killing every Sentinel soldier in New Baghdad, except Mitchell, Ilona and Gideon, because their DNA is on Atlas' databases. Cormack is unaffected since he was not within the perimeters of the attack, but is nonetheless captured and taken to an Atlas prison camp, where he meets up with his comrades once more.

During imprisonment, Irons personally tortures Mitchell and Cormack, and shoots Cormack in the hip, giving him time to bleed out. Ilona and Gideon manage to overpower their captors and free Mitchell and Cormack, but Cormack is unable to assist them in combat due to his injuries. Ilona escorts Cormack out the premises whilst Mitchell and Gideon take out as many Atlas forces as they can, learning that Irons plans to strike every major military base in the world with Manticore.

Mitchell and Gideon eventually escape the prison and meet up with Ilona, who has secured a getaway vehicle. They drive to a safe distance and then come to Cormack's aid, but it is too late and he dies from a massive blood loss. Mitchell, Ilona, and Gideon then vow to kill Irons in order to avenge Cormack.

Cormack climbing on the crates in Induction.

Cormack holding onto Jackson in the drop pod.

Cormack looking over a injured Mitchell.

Cormack with his Sentinel Operator Suit and Helmet

Cormack running to the plane to place the tracker in Sentinel.

Cormack in the opening cutscene of Throttle.

Cormack with Kingpin, Mitchell, and Gideon in Throttle.

Cormack with Gideon in Armada.

Cormack seeing the Hovertank's detonation by Gideon, in Bio Lab. 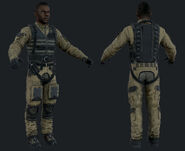 Retrieved from "https://callofduty.fandom.com/wiki/Cormack?oldid=2488218"
Community content is available under CC-BY-SA unless otherwise noted.