The Tel Aviv War or Invasion of Tel Aviv is a conflict that occurred prior to 2015.[3] It was presumably fought between both the United States of America assisting its ally Israel in an attempt to fight off one or more of Israel's neighboring countries.

The conflict followed a series of other Middle Eastern conflicts, but is notable for causing such massive devastation of the region that those countries involved subsequently collapsed, setting off a global energy crisis that crippled First World nations who had relied on Middle Eastern oil. This enabled the rise of the Federation, which dominated the global energy market going forward. 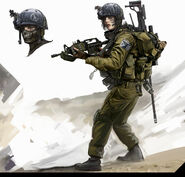 Retrieved from "https://callofduty.fandom.com/wiki/Tel_Aviv_War?oldid=2470893"
Community content is available under CC-BY-SA unless otherwise noted.