For other uses of Makarov, see Makarov.

"It doesn't take the most powerful nations on Earth to create the next global conflict. Just the will of a single man."
— Vladimir Makarov

According to info in Call of Duty: Modern Warfare 2, Vladimir Makarov graduated from the Frunze Military Academy as an officer in the Russian Army first serving as a paratrooper. Later on in his career he made it into the Spetsnaz and served two tours in Chechnya. It is believed that a company under his command were involved with some of the most brutal "cleansing" raids.

At some point, the U.N. held an inquiry investigating these charges of human rights violations. Makarov's name appeared at the top of the list presented by an EU Investigation panel, but the inquiry was dropped when Makarov opted for discharge from the armed forces. This incident would mark the beginnings of his pathological hatred towards the West and the Russian government for giving him no other option but to leave the armed forces. Afterwards, Makarov brought his past military training to bear in many criminal and terrorist enterprises such as human trafficking, money laundering, the bombing of military/civilian targets, assassination, etc. At some point, the leader of the burgeoning Ultranationalist Party, Imran Zakhaev, took notice and allowed Makarov a position within his anti-western movement. It is said that Makarov was "kept in check" by Zakhaev during this partnership. Zakhaev was killed by USMC, Loyalist and SAS forces at the climax of the Second Russian Civil War and the Ultranationalist party splintered. Makarov's resources and contacts within the criminal world allowed him to assume control of a large portion of the dissolved Ultranationalist party.

According to newspaper clippings in his safehouse, Vladimir held up photos of Bravo Six (Gaz, Griggs, Price and MacTavish) and declared them to be responsible for the death of Imran Zakhaev. Most likely, it is for this reason that he holds a grudge against Price. Included were news articles showing Makarov responsible for terrorist attacks in London and Moscow; threatening the removal of the Ultranationalist party controlling Russia. Newspapers in the cutscene before the level No Russian also mention Makarov being a student of Russian history, and wanting to see a return to an autocratic rule like that of pre-communist Russia.

"Makarov's no prize. He's a whore. A mad-dog killer for the highest-bidder."
— General Shepherd to Private Allen.

In 2016, General Shepherd and his Task Force 141 are seemingly responsible for capturing Makarov and bringing him to justice. Shepherd selects American infantryman Joseph Allen from the 75th Rangers Battalion and grooms him to become a CIA agent. Shepherd then inserts Allen within Makarov's terrorist cell, seemingly for the purpose of some deep cover operation.

Makarov and his men launch their terrorist attack on Zakhaev International Airport with their latest member, Alexei Borodin (Joseph Allen's alias) in tow. Suspiciously, Allen's only orders are to follow Makarov and his men as they shoot their way through the airport, but not to intervene in any capacity. By the end of the assault, it is made apparent that Makarov knows Borodin is an undercover CIA operative. He kills Allen and leaves his body at the scene of the massacre, implicating the American soldier in the attack. Makarov explains to his comrades that his actions were to bring about a full scale war between the United States and Russia. Incidentally, this war would personally benefit General Shepherd.

"Intel suggests Makarov may be using a safehouse..."
— Ghost

The war ensues and General Shepherd is given supreme command over the military and a mandate to continue his search for Makarov, who the General now truly needs killed so that he can bury any evidence of foul play. Makarov and his men are tracked down to two possible locations. One element of the Task Force is sent after Makarov in his Safehouse in the Caucus Mountains and another is sent to assassinate him at an airplane graveyard in Afghanistan. Shepherd then begins to purge his own Task Force of anyone who knows of his involvement with the airport massacre and the surrounding events. Makarov is contacted by Captain Price, who asks for intel on Shepherd's whereabouts. Realizing that his only hope for survival is getting rid of Shepherd, Makarov agrees to tell Price the location of Shepherd's base, one Site Hotel Bravo. Price and MacTavish later act on this information and assassinate Shepherd. Although no outcome is given concerning the battle between Shadow Company and Makarov's forces, Makarov himself survives.

Makarov is the multiplayer announcer for the Inner Circle faction. [5]

All of these attacks means that Makarov has killed over 1500 people.

"Vengeance is like a ghost. It takes over every man it touches. It's thirst cannot be quenched, until the last man standing has fallen. The world's men of action will look and wonder... how it came to this. You may be able to destroy me, but the beast will eventually come for you."
— Vladimir Makarov

In the World Reveal Trailer, the voice of Vladimir Makarov is heard.

"The American thought he could deceive us. When they find that body...all of Russia will cry for war."
— Vladimir Makarov

"If you fight, I will fight back."
— Vladimir Makarov

In the October 4th "Infamy" trailer, the same voice is heard. Here, "you" seems to refer to the United States.

"The world has been your battlefield. Everywhere you go, the blood of brothers and sons screams out against you. Perhaps you cannot yet hear it, because this soil is not your own. But you will...you will."
— Vladimir Makarov

"I have no patience for cowards."
— Vladimir Makarov to Joseph Allen (Alexei Borodin) in the level No Russian if the player runs away from Makarov and hides, he will come towards the player and melee them.

"Два. Используйте всё к своему преимуществу. (Two. Use everything to your advantage)"
— Makarov, listing his second tactic in the England teaser.

"Четыре. Атакуй с неожиданной стороны. (Four. Attack from an unexpected side)"
— Makarov, listing his fourth tactic in the Germany teaser.

"It doesn't take the most powerful nations on Earth to create the next global conflict. Just the will of a single man."
— Makarov on the reveal trailer for Modern Warfare 3

"You think I am mad. But soon, you shall see that every move, every strike, is meant to bring us to this."
— Makarov on the "Redemption" trailer of Modern Warfare 3. 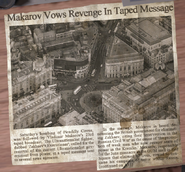 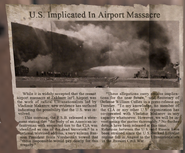 Makarov as seen in the Call of Duty: Modern Warfare 3 Redemption singleplayer trailer
Add a photo to this gallery

Retrieved from "https://callofduty.fandom.com/wiki/Vladimir_Makarov?oldid=1152594"
Community content is available under CC-BY-SA unless otherwise noted.