Call of Duty Wiki
Register
Don't have an account?
Sign In
Advertisement
in: Call of Duty: Black Ops Zombies Maps

For the Call of Duty: Black Ops 4 remake, see Classified.

"The Pentagon is under attack! Washington is going to DEFCON 1 in this installment of "Zombies"."
— Description

"Five" is the sixth Zombies map, and the second in Call of Duty: Black Ops. The map is unlocked after completing the final campaign mission, "Redemption", on any difficulty, or by entering the code '3ARC UNLOCK' on the computer terminal in the main menu, which will also unlock Dead Ops Arcade. It takes place in The Pentagon, the United States Military Defense building, located in Arlington, Virginia.

The Winter's Howl is a new Wonder Weapon in Zombies. It can only be obtained from the Mystery Box, and acts like an ice gun, freezing zombies over in ice and killing them. Zombies that aren't killed by the first shot will be slowed down considerably. When Pack-a-Punched, it becomes the Winter's Fury.

Two new power-ups are featured in "Five", one of which is exclusive to the map.

The Bonfire Sale can only be obtained if the players kill the Pentagon Thief before he steals any players' weapon. Upon retrieval, all Teleporters will link to the Pack-a-Punch room. In addition, the price of the Pack-a-Punch Machine will be reduced from 5000 points to 1000 points.

Crawler Zombies return from Kino der Toten, and will only spawn if any players are located in the labs.

A new enemy, the Pentagon Thief, debuts with, and is exclusive to, "Five". He replaces Hellhounds from previous maps. The Thief will attempt solely to steal players' weapons, and will not injure or kill them. Depending on how players react and whether or not they kill him, they are subject to different power-ups upon his death.

This room contains four windows made of glass that can be destroyed and replaced with regular barriers, and two sections of wall that can be broken down. It contains the Quick Revive machine and a telephone required for the musical Easter egg. It also contains a teleporter (active only after the power has been turned on), and the Olympia and M14 available for purchase off the wall, both for 500 points. When the power is turned on, this room gets very dark, and the lights are either dimmed or flickering. Of the six spawns in the very first room, only four spawns are used; however, these spawn points change when the power is turned on. This room also features one of two traps, which can become accessible after finding the operating mechanism; one is in the room with the Bowie Knife, while the other is in the dark spot behind the computer terminal nearest the lift that goes from the war-room to the lab. After adding it on the middle of the metal detector, located in the hallway with Quick Revive, it can be activated for 1000 points, and will function like the Electro-Shock Defenses from Der Riese and Kino der Toten.

This room is the only one that connects to the starting room. There are two doors that lead to this room; both will open when one is bought for 750 points. It contains two windows and two sections of wall that can be broken down. It also contains the first elevator which takes the player down to the War Room. This room also has Speed Cola and an MPL available for purchase from the wall for 1000 points. This room features the second of two traps, which like the first one, requires the operating mechanism to be found and placed.

To access it, one must remove a barricade blocking it, costing 1000 points. Trips cost 250 points, both up and down. Zombies can get into the elevator to attack the players. There is little room to navigate in the elevator, so even a few zombies getting in can be devastating. The flames that appear will get rid of the already killed zombies inside the elevator.

This room is the biggest actual room in the level, split into different sections. The first elevator takes the player to the top floor of the War Room which contains four windows, an MP5K, and a PM63, both of which cost 1000 points, and the Double Tap Root Beer machine. The player must then buy access to the bottom floor of the War Room for 1000 points. The bottom floor is divided by two barriers that must be bought for 1250 points each. It also contains the Juggernog machine, the Mule Kick machine, a Stakeout for 1500 points, and the second elevator that takes the player down to the lab area. This room is connected to the bunker and contains the four switches that must be flipped to decrease the DEFCON level to DEFCON 5, which makes all teleporters lead to the Pack-A-Punch room/Panic Room. There is also a teleporter located in the center of the room. It also contains the trap box that can be placed in the player's inventory and later used in the top floor metal detectors. The top level of the War Room is where players are usually killed because occasionally someone will not guard a window, which will result in a break-in. The bottom level of the War Room can be taken care of easily if the players stay together.

This elevator is much larger than the first and has a window on each level to make camping in the elevator more difficult. It also faces different ways depending on which level it's on. This elevator, like the first, costs 250 points to use between trips. Zombies can swarm players in this elevator easily as well. If several zombies become trapped in the elevator between floors, it is possible to run around them in circles until the doors open again, assuming the player has Juggernog.

This area is made up of hallways and rooms and is accessed by the elevator from the War Room. It contains the Power Switch and a telephone required for the musical Easter egg. Once the Lab Area is accessed, Crawler Zombies will spawn while a player is in the Lab Area, teleporters and Perk-a-Cola machines will be activated, the DEFCON level can be changed, and the path to the Bunker is available. The area itself contains several teleporters. The M16 and the AK74u can also be purchased in the Lab Area for 1200 points each.

This room seems to have been a testing room, as there is a live pig hanging from a crane which can be killed, and some human corpses, very similar to the Nova 6 test subjects in "Rebirth". Claymores and a Mystery Box spawn are located here. It also contains two windows and several doors.

This room seems to have been used for weapon testing, as there is an unusable Winter's Howl, Thundergun, Death Machine, and Ray Gun which can be found here. There is one Mystery Box spawn and the Bowie Knife is located in there. This room is closer to the teleporters that return them to the same floor level of the labs, albeit on the other side of the labs. One of the trap pieces can be found in a locker in this room.

The 115 Clearance Room is attached to the War Room and can be accessed once the power is turned on and DEFCON switches are decreased to 5. As long as someone is in the room, it will remain open, but if no one is in the room, the doors automatically close. It contains one of the telephones required for the musical easter egg and the Pack-a-Punch Machine, which after a limited time, turns around back into the wall, so if someone Pack-a-Punches, they will have to do it quickly, or risk losing their weapon. It also contains two windows and a teleporter, which zombies cannot come into the room from.

In "Five", a Thief round will occur some time after round four, as long as the power has been turned on.

There are multiple consequences that play out depending on how the players deal with the Thief as listed below.

He will only spawn after the power is turned on. It is best to find which player the Thief is chasing so that player can run around on the middle floor. Other players that are not targeted can shoot him down without being at risk of any weapons being taken. Once a player has been targeted, he will be visible to that player until he either escapes or dies.

Another major gameplay element of this map is the DEFCON (Defense Readiness Condition) feature. In the War Room of the Pentagon, there are a series of switches that will increase the Pentagon's DEFCON level. After hitting four switches, and putting the Pentagon at DEFCON 5, a secret "Panic Room" will open up. This room contains the Pack-a-Punch machine. The Pack-a-Punch room will close once everyone has left the "Panic Room". To open it again, the DEFCON must be lowered to five again. The room will remain open as long as one player is in the room, but when the doors are open, the Pack-a-Punch Machine disappears. The DEFCON system is one of the only ways to access the Pack-a-Punch on this map. When the DEFCON is lowered, all teleporters will go directly to the Pack-a-Punch room. The only other way to enter the Panic Room is with the Bonfire Sale power-up, negating the use of the DEFCON switches to get in, although getting the power-up is challenging, and can only be obtained if the Pentagon Thief is killed before he steals any weapons.

The screen is shown as completely black, and John F. Kennedy can be heard speaking.

John F. Kennedy: For time and the world do not stand still. Change is the law of life. And those who only look to the past or the present are certain to miss the future.

The screen changes to showing Kennedy in black and white, sitting at a table.

John F. Kennedy: I said, 'are certain to miss the future'!

Robert McNamara steps into the room near Castro.

Robert McNamara: Prime Minister Castro, this missile crisis was the last straw. We almost blew ourselves up. Now we invited you here today...

Robert McNamara: ... in good faith, to sort this thing out.

Fidel Castro: (pointing at Richard Nixon) And why is he here? He lost!

Richard Nixon is shown sitting with them at the table, annoyed at Castro's remark.

John F. Kennedy: As I always say, forgive your enemies, but remember their names. Now gentlemen, as I like to think, in the long history of the world, that there are only a few generations...

Noises are heard in the background.

Richard Nixon: (looking frantic and ducking) Sounds like someone breaking in...

Zombies appear at a window on the other side, making noises and trying to break through.

Robert McNamara: It appears the Pentagon has been breached.

John F. Kennedy: Zombies. Gentlemen, at times like these our capacity to retaliate must be and has to be massive, to deter all forms of aggression.

Kennedy walks over to the wall behind him and hits a button, which makes the wall flip around to show an armory of weapons.

Screen then shows the four of them coming out of the armory. McNamara with a Stakeout, Kennedy with a China Lake, Castro with a Bowie Knife and a Python and Nixon with two HS-10s.

Richard Nixon: Yes Jack, any superlative words of inspiration for your humble troops?

John F. Kennedy: Do not pray for easy lives, my friends. Pray to be stronger men.

The group cocks their guns as the screen fades into color, and then the intro ends. 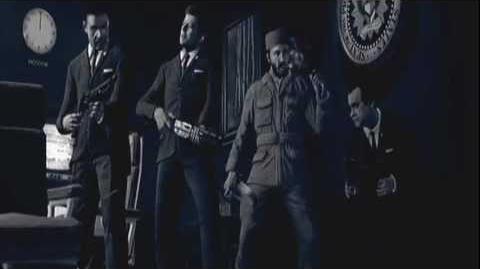 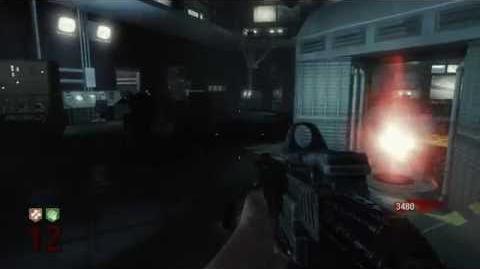 The team getting ready to fight back the zombie horde.

A view of the conference room