Alive (As of Moon)

Corporal Tank Dempsey is an American Marine who fought in the United States Marine Corps, and is a playable character in the Zombies game mode. His player indicator color is white (shared with John F. Kennedy and Sarah Michelle Gellar), but is randomized in Moon.

"Tank Dempsey: American hero. Hand him a loaded weapon, a good woman, and something to shoot at and he is happy. Enrage him and he will rip your guts out and use them as a bandolier.

Dempsey was selected for this mission after he showed his true grit at the battle for Peleliu. Remarkable though it may seem, his unit was captured during the early raids before the main invasion, and he spent 2 weeks in a rat infested bamboo cage submerged in malarial water. Well that did not stop The Tank. After he gnawed his way through the cage, he then gnawed his way through his captors armed only with a Bobby pin and his Medal of Honor which he keeps secreted in various body cavities.

— Tank's biography added with Map Pack 2 in Call of Duty: World at War.

"November 19, 1917
It seems beyond doubt that Fritz is up to no good. Air reconnaissance suggests prototype armored weaponry is being tested in Northern France. Scuttlebutt reads like the ramblings of a mad man; strange lights in the sky... a mysterious plague... even giant metal men.
I'll be at the site within the week to learn the truth with my own eyes..."
— Tank Dempsey

"April 14, 1918
After far too long waiting on the sidelines, we finally got our first taste of combat. Our actions at Belleau Wood seem to have brought their Spring Offensive to a grinding halt. We even heard talk that Fritz has nicknamed us the 'Devil Dogs', following the allround ass kicking they took... and that's fine by me.
We intercepted communications suggesting that we're not the only nation to learn of the enemy's plans. Scuttlebutt is that the Russians & Japanese are looking to grab a slice of the action. Things are going to get interesting.
DEMPSEY"
— Tank Dempsey 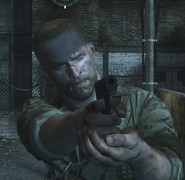 Dempsey as seen in Der Riese. 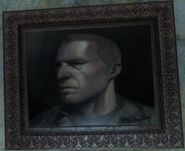 Dempsey and the rest of the crew in Shangri-La.

Dempsey's appearance in Moon while using a Death Machine.

Gamer Picture that is received after completing the Eclipse Easter Egg (Xbox 360 only).

Demspey shown in the training level for Call of Duty: Black Ops Zombies.

Tank Dempsey with other characters, as seen in Origins. 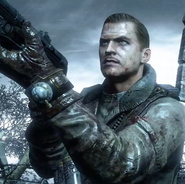 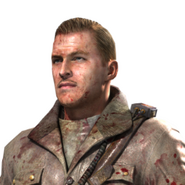 Tank in the Origins intro.

Tank meeting Nikolai Belinski and Takeo Masaki for the first time in the Origins intro cinematic.

Close up of Dempsey in Origins.
Add a photo to this gallery

Retrieved from "https://callofduty.fandom.com/wiki/%22Tank%22_Dempsey?oldid=2008205"
Community content is available under CC-BY-SA unless otherwise noted.