Call of Duty Wiki
Register
Don't have an account?
Sign In
Advertisement
in: Call of Duty 2: Big Red One Callsigns

'B' Flight number 1 was an American B-24 Liberator of 'B' Flight that flew bombing missions during World War II, notably a bombing mission on October 3rd, 1942 that softened sea and ground defenses around Oran to prepare for the following ground invasion. It can be seen in Call of Duty 2: Big Red One in the level "Liberators".

During the mission to weaken defenses around Oran, 'B' Flight number 1 suffered heavy structural damage from ground fire and three of the seven crew members were killed during the flight.

The player takes control of multiple weapons on the B-24 to destroy enemy planes and to bomb targets on the ground. The plane can be destroyed, resulting in death and having to restart the mission.

Known crew members aboard 'B' Flight number 1 at the time of the Oran mission include: 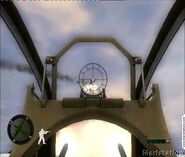 View from a different turret.
Community content is available under CC-BY-SA unless otherwise noted.
Advertisement