The .357 Magnum, also known as SW 357 within game files, is not available in the campaign. In multiplayer, it is unlocked at Level 49. It is a powerful sidearm for those who want to take down the enemy in the least amount of shots. Like most revolvers in the series, it holds only 6 rounds. The .357 Magnum is capable of a high rate of fire. Compared to the Desert Eagle in Call of Duty 4: Modern Warfare, the .357 seems to have more accuracy and not as high recoil, however the recoil from each round pushes the nose of the gun up quite a bit before resting back into position; when firing rounds as rapidly as possible, each shot is pushed up into a distinct straight, vertical line. In a burst of six aimed directly to the head, it is possible that five will completely miss. Because the gun is so powerful, aiming down to the chest or gut will produce a kill in two (from short distance) to three (from long distance) shots while using Stopping Power. In hardcore modes it is a one shot kill at any range. Overall, this gun is ideal for many classes, but it is a fine sidearm, no matter how the player plays. Those with sniper rifles will find that the .357 can easily take out anyone that's in the players way while traveling to a location, while submachine gun and light machine gun users will find that the .357 is a trusty sidearm when the players magazine is empty, and the player still needs to engage a target.

Reloading this weapon is, however, slow; it takes approximately three seconds. It should also be noted that this sidearm only holds six shots in its cylinder, and therefore the player will be forced to reload often. Thus, it is best to pair it with another weapon with slow reloads and use Sleight of Hand.

In Zombies, it is a powerful weapon, being able to kill up to three zombies in one shot on early rounds. The recoil is reduced compared to multiplayer and the reload time remains unchanged. It is an ideal backup gun for fighting Hellhounds. The only drawbacks are that it reloads every six shots, possibly costing the player their life. The .357's one-shot kill ability is lost around round 15.

The .357 is also a good weapon for covering windows while camping. In multiplayer, the player can fire the .357 Magnum with very short delays (5ms per shot), but in Nazi Zombies the fire rate is lower, though this can be changed using Double Tap Root Beer.

When upgraded via the Pack-a-Punch Machine in Der Riese, this weapon becomes ".357 Plus 1 K1L-u", receiving an increase in damage over range. Overall it is a good weapon for early rounds, but it would be ideal to trade this weapon after round 15. It is not necessarily a good idea to upgrade this weapon, because its capacity and maximum amount of ammo given doesn't increase at all; the only thing that is gained from upgrading it is its slight increase in the firepower. However, it will be used instead of the M1911 if the user is downed, meaning the downed player can provide more useful cover fire while/until they are revived. However, compared to the upgraded M1911 or the Ray Gun, the .357 Plus 1 K1L-u is pretty dismal. 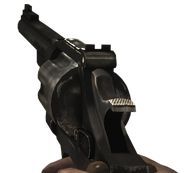 The .357 Magnum in first person 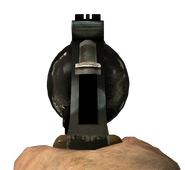 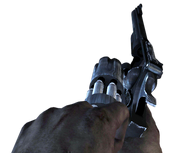 The .357 Magnum in Call of Duty: Zombies

Getting the .357 Magnum from the Mystery Box 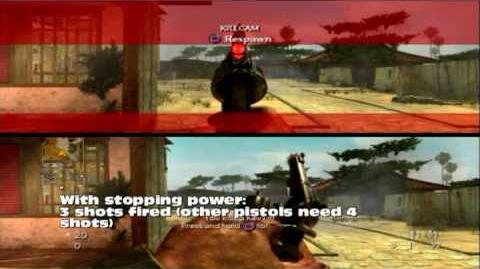 The .357 Magnum in first person

Aiming down the .357 Magnum's iron sight

The J358 is a very stable and powerful pistol. It scores a two-hit kill at close to medium-range, and further out will result in three hits. Compared to its major competitor, the .50 GS, it fires faster, and has more options for recoil suppression, though it lacks the raw damage potential of the GS, especially with the GS's Akimbo perk. The Stopping Power rounds can help with the damage, making one-shots to the head possible. However, the rounds increase recoil, ADS time, reload time, and decrease the fire rate. With trigger attachments, like the Match Grade or Lightweight triggers, fire rate can go so fast that it becomes slight uncontrollable. In general, the J358 is a solid secondary, and, if modified properly, can be adapted as a lethal primary.

The J358 has a rather low drop chances, so players might not see many of them around in Battle Royale. It is only available in weapon boxes and comes as Common blueprints.

The .357 returns in Call of Duty: Modern Warfare.

The .357 in the weapon selection menu. 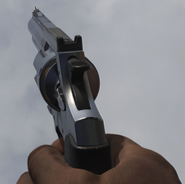