The .44 Magnum, called Colt Anaconda in the game files, is always carried and used by General Shepherd throughout the campaign as his signature weapon of choice. Shepherd is seen reloading his .44 Magnum at the beginning of the mission "Team Player". In the end of "Loose Ends" he unholsters a .44 Magnum tucked in the back of his pants that he uses to kill Ghost and Roach, and in "Endgame" when he attempts to kill Soap and Captain Price.

This weapon is not available in the campaign; however, while in the mission "Museum", the player can pick up this weapon either from the display shelf or by killing Shepherd. It is also possible to have both .44 Magnums at the same time. In the remastered version however, enabling the Danger Close! cheat (which turns every human enemy into Shepard) and forcing an enemy to use his sidearm, it is possible to obtain the .44 Magnum in almost every mission.

The .44 Magnum is available for Create-A-Class at level 26, being the second Handgun unlocked. This powerful weapon always kills in three or fewer hits, regardless of the use of Stopping Power—the perk only increases the range at which a two-hit kill is attainable. In Hardcore game modes, the .44 Magnum requires just one hit to kill regardless of range or perks, unless used against a player using Painkiller, Final Stand or Last Stand, or if the player is shooting through thick cover.

The .44 Magnum has high visual recoil, but with a fast recovery between shots, and can have all six rounds fired quickly with little loss of accuracy up to medium range. Its main drawbacks are its small six-round capacity and moderately slow reload animation; however, it does have a quick reload cancel, which reduces the reload time by roughly half. The normal spare ammo carried by the player is twelve. But when equipped with the Scavenger perk, it increases to thirty-six.

Despite being a handgun, the .44 Magnum in fact has the same effective range of most rifles, especially with Stopping Power. Being able to kill at even extreme distances, the drawback for using this gun at long range is the lack of magnification when aiming down the sights, a trait shared by all handguns.

Due to its revolver nature, the weapon only has a subset of regular pistol attachments available. The FMJ will improve the .44 Magnum's ability to pierce cover, but the small capacity makes spraying through cover ineffective. Still, it is without detriments, and it is worth to use when the player is in the unlocking process of other attachments.

The Akimbo attachment will give the player two .44 Magnums, for double the power up close, while sacrificing long range effectiveness. The combination of two-shot kill and akimbo can be very deadly in the right hands, and it would make up for a good close range backup. However, the player will lose some of the long range effectiveness, though this can be partially countered by using Steady Aim.

This weapon is most commonly found in multiplayer with the Tactical Knife attachment, and used with the combination of rushing perks Marathon, Lightweight, and Commando. The knife attack is very effective with a Tactical Knife, especially with the increased melee lunge range due to Commando.

The .44 Magnum in third person view.

Shepherd killing Ghost with his .44 Magnum.

Shepherd about to shoot Soap.

The .44 Magnum makes a brief appearance in Modern Warfare 2: Ghost. In the last comic, "Dead And Gone", Manuel Roba is seen holding a .44 Magnum. However, he drops it after Ghost throws a knife into his arm.

The .44 Magnum is used by Shepherd during his confrontation with Soap and Price.

The .44 Magnum reappears in Call of Duty: Modern Warfare 3, featuring tritium sights, wood grips and a blued finish. The hammer also appears to have been either cut or filed down to a shorter length.

The .44 Magnum is only available in the "Bag and Drag" mission of the campaign. It is used by the GIGN, who can draw the revolver when they are out of ammo, or when they engage enemies in close quarters hand-to-hand combat. The .44 Magnum can be picked up if Tueur or the random soldier who assists the player is killed while wielding it. It is powerful enough, being able to kill enemies in one shot, though it can only hold 18 rounds in reserve. It is also briefly seen in the intro cutscene of "Prologue" during a flashback where Shepherd is seen wielding it, and in "Return To Sender" where it is holstered by Waraabe.

The .44 Magnum is unlocked at Level 46 in Call of Duty: Modern Warfare 3's multiplayer. Compared to its Call of Duty: Modern Warfare 2 counterpart, it has less maximum damage, much less minimum damage, lower range, and the same amount of recoil. Though the gun works well in close quarters combat, it is less competitive in mid-long ranges due to its low minimum damage and high recoil. At maximum range, it can take five-six shots to kill an enemy depending on where the bullets hit. It has five reserve magazines instead of the normal two, which provides more ammo and longer use to skilled players.

In Infected, the .44 Magnum is the secondary weapon in "Knife vs Type 95" and "Knife vs PP90M1". It is also used as the only weapon for the survivors in "Striker vs Jugg". There used to be a loadout with only the .44 Magnum, named "Knife vs .44 Magnum", but was later removed. In all of these instances, it has Akimbo equipped.

In addition to Infected, the .44 Magnum used to be in Gun Game when it was available in public matches. It was the seventeenth weapon, and it had the Tactical Knife attached.

The .44 Magnum is available in Survival Mode at level 20 and costs $250. It can be an effective weapon for the early rounds, due to its low cost, high damage, and quick reload time. However, like all pistols, it should be traded in for a more powerful weapon in later rounds, especially because of Juggernauts and helicopters.

First person view of the .44 Magnum.

Shepherd wields his .44 Magnum in the "Prologue".

The .44 Magnum appears in Call of Duty Online.

The .44 Magnum in first person

6
The .44 Magnum, referred to as the Raging within game files and Wild Widow in Safeguard, appears in Call of Duty: Ghosts.

The .44 Magnum is only used in the final campaign mission "The Ghost Killer". After breaching the door leading to the engine room, Logan uses Rorke's .44 Magnum to shoot two soldiers in the room. Unlike its counterpart in multiplayer and Extinction, it is used in double-action (semi-automatic) mode instead of single-action. Afterwards, Rorke manages to get Logan off him, and wounds Hesh in the arm with the .44 Magnum. After the train lands into the water, Rorke fires his last round, but misses due to him getting hit by a fire extinguisher by Hesh. While they both fight, Logan picks up the empty revolver, and catches one of the rounds that Hesh throws to him, loads it into the gun and shoots Rorke. The bullet also goes through Hesh, but both he and Rorke survive the shot.

The .44 Magnum is available in Multiplayer.

The .44 Magnum's main weakness is its rate of fire. The .44 Magnum is single-action, making the .44 Magnum fire very slowly, firing at a maximum of 200 RPM. That is by far the slowest fire rate of any of the handguns, and it makes the .44 Magnum highly reliant on killing in as few shots as possible.

Overall, the .44 Magnum is a deeply flawed weapon. The .44 Magnum is a statistically weak handgun in all aspects except its sheer power, where it dominates relative to other handguns. However, its power is dependent on the user fully utilizing the weapon's body multipliers, which is problematic since the .44 Magnum has a much smaller damage multiplier area compared to the game's Sniper Rifles. The solo version of the .44 Magnum has some utility in Hardcore thanks to its incredible long range power. The .44 Magnum's power gets put to much better use when used Akimbo, allowing for far more acceptable damage output, and allowing the one shot kill potential up close to be a welcome bonus instead of being a mandatory result for the .44 Magnum to be useful.

The .44 Magnum appears in Extinction. It has the highest damage per shot but lowest ammo capacity of all the pistols available in Extinction. Unfortunately, to counter the high damage, the .44 Magnum has the lowest range of the pistols. This makes its high maximum damage only show affect at near point blank distances. It also has a slow rate of fire, high visual recoil, and small magazine capacity. However, upgrading the pistol to its max can almost fix all of these problems with the weapon as it will gain increased range through the Muzzle Brake, a high magazine capacity, and akimbo if the player chooses to upgrade it all the way. This should eliminate its visual recoil and slow rate of fire.

An ACOG Scope can be attached to the .44 Magnum by purchasing the "Magnum ACOG attachment" from the armory for two teeth. It requires the Invasion DLC. The ARK barrel can also be added to the .44 Magnum with the "Pistol Ark Attachment" for 125 teeth. It requires the Nemesis DLC. Due to these armories and the upgrades, it is possible for the player to equip an attachment from all four groups onto their .44 Magnum.

Due to the .44 Magnum's short range, it essentially plays like a pocket shotgun. As such, it'd be best not to use this alongside a Shotgun in tandem with the .44 Magnum since the two weapons would serve too similar of a role.

The .44 Magnum appears in Safeguard as the "Wild Widow". It is very rare. It comes with Armor-Piercing rounds, and can be obtained from a Supply Drop crate. It has very high damage, killing enemies in one hit until round 50 if at Weapon Level 1; however, it has a low ammo reserve and magazine capacity, so trading it for something else or not taking it is not uncommon. Due to these characteristics, it is best kept as a secondary, and reserved for enemies with higher health, specifically the Destructors. 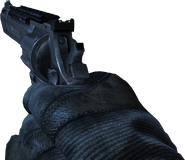 The .44 Magnum in first person. 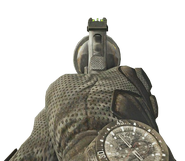 A Modern Warfare 2 styled .44 Magnum on a poster on the map Octane.

Tackling Rorke and grabbing his .44 Magnum.

The .44 Magnum returns in Call of Duty: Infinite Warfare as the Stallion .44, added in the July 25th, 2017 update along with the G-Rail assault rifle. Unlike previous iterations, hipfiring the Stallion .44 allows a faster fire rate as well as slowly increasing accuracy, whereas firing whilst aiming down the sight causes a slower fire rate.

The Stallion .44 was added to the Magic Wheel in Zombies in Spaceland, Rave in the Redwoods, Shaolin Shuffle and Attack of the Radioactive Thing, and can be found as a wall weapon in Staging along with the Oni for 750 points in The Beast From Beyond.

The Stallion .44 in first person 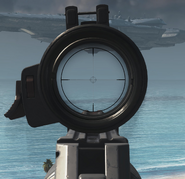 Aiming down the scope of the Peacekeeper variant

The .44 Magnum returns in Modern Warfare Remastered as a bounty weapon, added via an update on February 7th, 2017.

It has near-identical stats to that of the Desert Eagle, but with 1 less round available for use before a reload is needed. As an advantage however, it includes a silencer attachment which does not give any real penalty, in contrast to other weapons in the game.

This weapon shares ammo with the Desert Eagle. 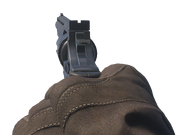 The placeholder model used prior to release, showcased on the map Overgrown