The 115 Generators are utilities found in the Zombies map Origins. Within Origins, there exist a total of 6 generators, number from 1 to 6. The 115 Generators were designed by Group 935 to channel Element 115 towards the main Mound and the ancient rune stones, allowing to power-up utilities such as Perk-a-Cola machines, an Ancient Weapon Box, and the Pack-a-Punch machine. Following the installation of the 115 Generators, undead knights arise within the dig site.

One of the 115 Generators, Generator 3, appears again in the map Revelations with Origins section.

There are six 115 Generators in total located around the map. Each Generator will power the Mystery Box, the Der Wunderfizz machine and any Perk-a-Cola machines in the surrounding area once it is turned on, similar to the Voltmeters in Mob of the Dead. Once all six 115 Generators are active, the Pack-a-Punch Machine will be available for use.

They are located in the following locations:

To begin an activation attempt of a Generator, players have to pay points, depending on the number of players in the match - 200 points per player (e.g. 600 points in a match with 3 players). Once the conversation process initiates, a cyclic bar will appear on screen. The more players standing on the metal platform, the faster the bar and the 115 tanks fill up. If there is no player on the platform while the process continues, the bar will draw backwards until a player steps back on the platform, or the bar becomes empty and the conversion process halts.

When the generator is captured, all players on the platform at the time of capture gain 100 points, and the player that initially activated it gets their points back, though only if they are on the platform and not bleeding out when the points are given out.

Whilst a Generator is powering up, Templar Zombies will spawn in through portals in the ground surrounding the generator and, attack the players until the 115 Generator is fully operational or the capture is halted, at which point they will die. Templar Zombies only give 10 points per kill (and up to 100 can be obtained per round per player), and yield no points for non-lethal hits. These zombies do not count toward the Rituals of the Ancients reward of 115 headshots, though killing them will show up on the stats screen.

Shutdown of the 115 Generators

Templar zombies, do not attack the players while they are deactivating the generator or when they en route to another. Furthermore, they will stop attacking altogether if a Monkey Bomb or G-Strike Beacon is thrown in the area. While the zombies are heading for another generator, a symbol appears over one of their heads, indicating their location. This symbol changes zombies if the one with the symbol is killed. Should the players succeed in eliminating the zombies while they are deactivating a generator, a Max Ammo will drop. It will not drop if the zombies are en route to another generator, however. 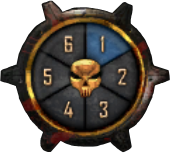 The icon when one is active 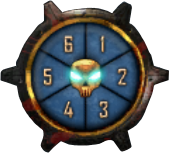 The icon when all are active 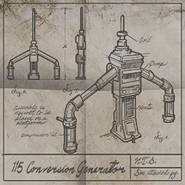 A schematic for a 115 Generator.

Map with locations of the 115 Generators