The 29th Infantry Division, nicknamed The Blue and Gray because of their distinctive shoulder patch, was a division of the United States Army that fought in some decisive battles of World War II. The unit is portrayed in Call of Duty 3 and Call of Duty: WWII.

In Call of Duty 3, the player's character, Pvt. Nichols, is a part of the 29th Division during most of the campaign. The division takes part in much of the fighting in Normandy, taking Saint-Lô, Mayenne and Chambois, and in turn helping to surround and capture much of the German Army in Normandy. Some of the 29th Infantry Division is folded into the 90th Infantry Division for a part of the campaign, due to the 90th having a shortfall in troop numbers. The player's squad is included in this group. 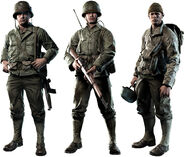 Some of the notable characters, left to right, McCullin, Guzzo and Huxley.

The 29th fighting in Saint-Lô.

In Call of Duty: WWII, the 29th Infantry Division is playable in the War Mode multiplayer map Operation Neptune, where the players land on Omaha Beach on June 6, 1944. This division is also playable in Operation Intercept.

Deutsch
Community content is available under CC-BY-SA unless otherwise noted.