Just like other weapons, the 31-79 JGb215 can be acquired from the Mystery Box, and serves as Shangri-La's main wonder weapon. The 31-79 JGb215 fires beams that causes zombies caught in the blast radius to shrink, having big heads, but small bodies. Once they are shrunk, the player can run into them to kick them, sending them flying, and killing them. Otherwise, small zombies can be killed with one hit from any weapon. Shrunk zombies deal very little damage, taking approximately fifteen hits for a shrunk zombie to kill a player with full health without Juggernog. The shot can go through other zombies while still affecting them, but cannot go through walls. If the affected zombies are left unattended for long enough, they will revert to their usual size, after five seconds.

The 31-79 JGb215 can also affect special zombies such as the Shrieker Zombie and the Napalm Zombie, but its duration is shorter on these two. The Napalm Zombie, if it explodes while shrunk, will cause only a small explosion with little damage.

The 31-79JGb 215 is a very effective wonder weapon, allowing the player to clear groups of zombies simply by shrinking them and running straight through them. Players must however be quick to eliminate small zombies as the duration is rather short, and the 31-79 JGb215 can simply not kill zombies by itself as its shots deal no damage whatsoever.

The 31-79 JGb215 returns in the remastered version of Shangri-La, which is one of the eight remastered maps contained within black ops 3's DLC 5: Zombies Chronicles.

There are a few changes from the Black Ops version to the Black Ops III version. There are two visual changes, those being the model of the gun being in higher quality, and when reloading, the player pulls back on the green Naga statue after putting the magazine in. The functional change is that the shrunken zombies no longer deal damage when hitting the player, but slow the player down instead, meaning that players can no longer just run through the hordes of zombies.

Ammo count, reload times, run speeds, and range are all kept the same between both versions of the weapon.

The 31-79 JGb215 appears briefly in the intro for Classified, where it is used by "Tank" Dempsey to accidentally overload a teleporter, sending Ultimis to The Pentagon.

When Pack-a-Punched, the 31-79 JGb215 becomes "The Fractalizer". The Fractalizer increases magazine capacity to 8 rounds, doubles the reserve ammunition to 40, and extends the shrink effect to 15 seconds on regular zombies, making the weapon far more effective.

The 31-79 JGb215 is required for two trophies/achievements. The first is Small Consolation, which requires the player to shrink every type of zombie with the weapon. It is also required for the Easter egg, where it is needed twice. The first time is in step 5, where a diamond must be shrunken with it. The other time is in step 11, where the Fractalizer must be used to charge several crystals, followed by it being used to shrink the Focusing Stone. 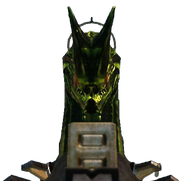 The Fractalizer in Black Ops III.

Dempsey holding the 31-79 JGb215 in the intro cinematic for Classified.

Dempsey firing the 31-79 JGb215 in the intro cinematic for Classified.