The 3D Printer is a utility in Call of Duty: Advanced Warfare's Exo Zombies mode. It serves the same role that the Mystery Box from Zombies serves, giving players a random weapon upon purchase.

The 3D Printer visibly cycles through different weapons when idling, and upon purchase, a random weapon will then be displayed. Despite popular beliefs, the player cannot time the printer to get a weapon that is displayed while the Printer cycles through them.

If the player upgrades a weapon, replaces it by purchasing a different weapon, and then receives the weapon (that was replaced) again from the 3D Printer, it will retain its upgrades. This can be useful in the later rounds, as some weapons will run out of ammo easily, and getting it from the 3D Printer, although risky, will give the weapon back with all ammunition.

The 3D Printer printing a CEL-3 Cauterizer (note the word "Atlas" is upside-down.)

The 3D Printer on the map Infection, offering a Magnetron.

The 3D Printer on the map Carrier, printing an LZ-52 Limbo. 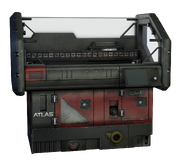 A render of the 3D Printer's model.