For a similar piece of equipment, see Flashbang.

John "Soap" MacTavish uses a 9-Bang during the assault on one of Kingfish's safehouses. 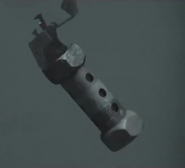 The 9-Bang appears in Call of Duty: Modern Warfare 3. It's similar to the Flashbang from previous Modern Warfare titles; however, after the first explosion, eight more detonations occur in fast succession. It is only used by Delta Force during the campaign. 9-Bangs are first usable in the mission "Black Tuesday", where Sandman orders the player to use them on multiple occasions. They are also usable in the missions "Hunter Killer", "Bag and Drag", "Iron Lady", and "Scorched Earth".

The player preparing to throw the 9-Bang.

The 9-Bang grenade returns in Call of Duty: Ghosts, this time available in multiplayer, whereas in campaign only the standard Flashbang is available. After every 0.75 second increment, one flashbang effect is added, and after 2.5 seconds, it is fully cooked and will finish off with an EMP effect after the flashbangs. If it is thrown without being cooked at all, only one flash occurs.

The EMP effect from fully cooking a 9-Bang temporarily disables enemy ground based equipment. Strong-Arm is a very useful perk due to it decreasing the time it takes to cook the 9-Bang to only 1.25 seconds. The flashbang effect has an 800 unit radius, or 20.32 meters, and a 512 unit range for the EMP (13.0048 meters).

"Tactical grenade that flashes and stuns. Can be cooked to detonate multiple times."
— Description

The 9-Bang returns in Call of Duty: Black Ops 4, appearing as a piece of Special Issue Equipment exclusive to Kerk "Ajax" Rossouw. It could also be found in Blackout, but was removed for balancing purposes.

The model of the 9-Bang.

The 9-Bang returns in Call of Duty: Mobile as the Serial Bomb as a tactical equipment and is exclusive of Battle Royale mode.