For a similarly named aircraft, see P-47 Thunderbolt.
For the Call of Duty: Advanced Warfare variant, see A-10 VTOL Variant.

The A-10 Thunderbolt II is briefly mentioned in background radio chatter throughout the campaign.      Known A-10's

Active
The A-10 appears in Call of Duty: Modern Warfare: Mobilized.

The A-10 appears in the campaign missions "Iron Lady" and "Scorched Earth", in which a SOFLAM is available to call in strafing runs. Killing nine enemies with the A-10 will award the achievement/trophy Nein. 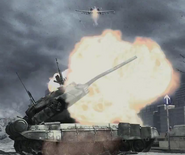 An unused pointstreak icon for multiplayer.

A-10 Thunderbolt II icon BOII.png
The A-10 returns in Call of Duty: Black Ops II, with a more futuristic design that is sleeker than the regular A-10 as a Scorestreak reward named "Warthog" that executes strafing runs, using it's GAU-8 Avenger and Hydra 70 rockets, around the map multiple times. Upon being called in, the Warthog will perform two to four strafing runs, attacking enemy players within it's line of sight. Although difficult to accomplish, it is possible to shoot it down. It has two flares, needing three rockets or Black Hats to destroy.

The A-10 on the map Carrier

An A-10 firing its rockets.

The A-10 appears in the levels "Brave New World", "Homecoming", and "Severed Ties". It appears in "Brave New World" twice as they fly over the player inside of Fort Santa Monica .Its first major appearance is in "Homecoming", where it can be controlled for a few seconds via the Remote A-10 Strafe. During the battle, multiple A-10's can be seen dogfighting Russian MiG-29's, but most of them lose those battles or evade them. They are destroyed in the level during the battle when 2 MiG shoot ATGM's into the drone towers, knocking them offline. It's second major appearance is in Severed Ties, where they provide Gun and Bomb runs for the tank units and CAS.

The A-10 is available in multiplayer. It later appears as the Air Superiority pointstreak. The A-10 also appears on the map Collision as a Field Order reward, the A-10 Strafe. However, there is also a cut streak with the Thunderbolt, the A-10, with audio files in the game. 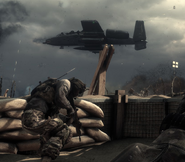 Fog of War and Hunting Party

In the level Fog of War, two A-10s (Blue Viking 5-1/5-2) are presumably shown, where they are dropping white phosphorus ordnance at the entrance of Barkov's depot. They also make a cameo in the level Hunting Party, where they are shown flying above Rammaza dropping bombs near the general hospital.

A-10 Thunderbolt II's makes its return in Modern Warfare as a Killstreak reward for players which serves as Precision Airstrike killstreak reward although with a different behavior than in previous games; the target must be designated through a binocular, thus requiring the user to have a direct line of sight with it, at which two A-10's will strafe the target in a quick succession after a delay of about 6 seconds. The target is also marked on friendly HUD.