The A-TACS AU Camouflage, is a weapon camouflage that appears in Call of Duty: Black Ops II. Though similar to the Dusty Camouflage from Call of Duty: Black Ops, it is actually a modern digital camouflage, though it uses organic shapes instead of pixelations. Due to its appearance, it can be difficult to see on some weapons. For this reason, many people avoid using it on weapons such as the Ballista.

In campaign of Black Ops II, it can be unlocked upon the completion of the level "Fallen Angel".

A-TACS AU camouflage on the Mk 48.

A-TACS AU camouflage on the MP7. 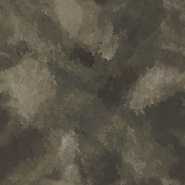 Another texture of the camouflage pattern.
Add a photo to this gallery
Retrieved from "https://callofduty.fandom.com/wiki/A-TACS_AU_Camouflage?oldid=2419584"
Community content is available under CC-BY-SA unless otherwise noted.