For the similar drones in Call of Duty: Modern Warfare 3, see Assault Drone and UGV.

The A.G.R. appears in campaign as the A.S.D. (Automated Sentry Drone). They appear in the levels "Celerium", "Karma", "Achilles' Veil", and "Judgement Day", as well as on every Strike Force mission, with the exception of "Second Chance". In all the main campaign appearances, both friendly and enemy drones are found, while in the Strike Force levels only "Shipwreck" and "I.E.D." have friendly drones. "Shipwreck" has enemy drones in addition to the friendly ones.

Several A.S.D.s can be accessed if the player has the perk Access Kit. In "Celerium", before the player rescues Erik Breighner, there is the A.S.D. J-5. Protecting J-5 from destruction will result in the completion of a challenge. In "Karma", the A.S.D. Buster can be accessed before opening the door with Salazar. Protecting Buster in this level will also result in the completion of a challenge. In "Achilles' Veil", the player will complete a challenge if they destroy four A.S.D.s while they are disabled from an EMP Grenade. In "Judgement Day", the player has access to another A.S.D., and will complete another challenge if they protect it as well.

When an A.S.D. is destroyed, it will start spinning in all directions and start to anonymously chase the nearest enemy. It can be avoided by stepping out of the way. However, the explosion is highly lethal, which can result in severe damage or death.

The A.G.R. is dropped in via an MQ Drone, and bursts out of its box when it lands on the ground.

The A.G.R. will roam slowly and aimlessly around the map on its own, and has two weapons: a machine gun with infinite ammo, and a semi-automatic rocket launcher that can launch two rockets in quick succession before needing to be reloaded. The A.G.R. moves around the map on a set of treads, and its upper body is completely independent from the threads, allowing the A.G.R. a great deal of mobility. However, the A.G.R. can sometimes have difficulty maneuvering through tight spaces, and it especially has trouble going up inclines, as it will go up inclines very slowly.

The player is capable of taking control of the A.G.R. using the reload button/key. When in manual control, the user fires the machine gun using the primary fire button, and fires the rocket(s) using the aim down sight button. The rockets will reload on their own without any user input, and the user can see the rockets visually loaded when they are ready to be fired.

When in manual control, the movement controls are used to position the direction of the treads, and then the A.G.R. will travel in that direction. The directional controls used to move the player's vision are used to move the upper part of the A.G.R.'s body. It can be awkward to efficiently move the A.G.R. in manual control, but players can get more accustomed to its feel with practice. The A.G.R. can also fall off of ledges with manual control. This can sometimes be used to pilot the A.G.R. in an efficient manner, but such opportunities to make use of that are few and far between, plus it opens up the potential for the A.G.R. to fall out of bounds and get destroyed. Under manual control, the user needs to be very careful when going up inclines, as improper approach to the incline can cause the A.G.R. to completely fail to go up the incline, and even fall back down when trying to climb it. Often times, if possible, the A.G.R. will be able to efficiently go up these inclines with a prepared, running start.

In manual control, hostiles will be indicated with a red overlay. Hostiles with Cold-Blooded as a perk will not have the red overlay.

Despite being a ground-based scorestreak, lock-on Rocket Launchers can lock onto the A.G.R. and fire. The A.G.R. doesn't have flares to avoid its damage, but it will have enough health to survive a direct hit from a rocket. This will leave the A.G.R. much more susceptible to getting destroyed afterwards. In a similar manner, a single Black Hat will merely damage the A.G.R. instead of destroy it, and a single EMP Grenade will temporarily stun it while dealing severe damage. All of the aforementioned methods can be used two times to take down the A.G.R. standalone. EMP Systems will also destroy the A.G.R. outright.

The A.G.R. has a fairly long operating time, with users being able to use the A.G.R. for well over a minute before it self-destructs.

The A.G.R. reappears in Call of Duty: Heroes. In order to be trained, it requires a Level 2 Machine Compound. They are among the slowest units in the game, but in great numbers can be effective in taking out defensive structures before destroying the remainder of the base. Players must be careful as they can easily succumb to hangar deployed air units and mines scattered around bases, or be destroyed by concentrated fire when clumped too close together. Using Soap or Harper's Care Package Skill can prolong their destruction and allow them to move deeper into bases and destroy more turrets.

Early version of some A.G.R.s (note how different they look from the final version).

An A.G.R. being used for security in the campaign mission "Karma". 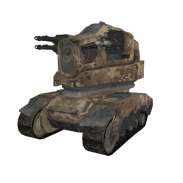 Render of the A.G.R. with tan texture, commonly as a friendly and player-controlled (both in campaign and in Strike Force missions). 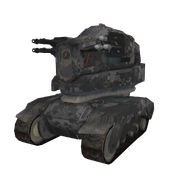 Render of the A.G.R. with digital camouflage, commonly as enemy. 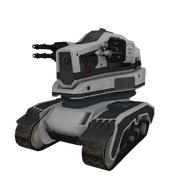 Render of the Security A.S.D. from the campaign mission "Karma".

Render of the missile the A.G.R.s fire.