The AA-12 appears in the campaign levels "S.S.D.D.", "The Only Easy Day...Was Yesterday", "The Gulag", "Contingency", "Loose Ends", and "Just Like Old Times". In "S.S.D.D.", it can be used after completing the Pit the first time. In "The Gulag", it can be found in the armory. Last, in "Loose Ends", it can be found in the basement armory. It has an extremely high rate of fire in campaign, which makes it useful for clearing out corridors and other close quarter areas, however it also makes it so the AA-12 will deplete its ammo reserve quickly.

Unlocked at level 18, The AA-12 is a unique weapon, being the only automatic shotgun in Modern Warfare 2. In addition, it uses an eight round box magazine, which doubles when Extended Magazines is used. However, for balance reasons, the AA-12 has a lower rate of fire and damage in multiplayer than it does in campaign. Sleight of Hand is a very useful perk, due to the AA-12 being capable of emptying its magazine faster than it takes to reload. Extended Mags is also useful to counter this problem.

The AA-12's main downfall is that it only has one extra magazine unless using Scavenger Pro. It has moderate recoil, but this is usually negligible due to its limited range, and shotguns are often hip-fired for wider spray. It also has lower hitting power, often requiring two or more shots even at close range, but this is also negligible because of the weapon's automatic fire capability.

Equipping a Silencer is not recommended, as this will shorten its already limited range from 500 to 300 inches. Using Extended Magazines will increase the capacity to sixteen shells, allowing prolonged fire, but limits it to only one single magazine with no reserve ammunition, unless Scavenger is used. Using Extended Mags in conjunction with Scavenger and its Pro version can make it a highly useful weapon, and some players use it as a primary weapon. It is also notable that with the Grip attachment, the AA-12's raise and first raise time is noticeably quicker than without.

Optics aren't the best choice of attachments for the AA-12, due to the higher usefulness of having Extended Mags or Grip attached. However, it can prove useful if the player wants to use the AA-12 for longer ranges.

Due to the overall aggressive play style of the AA-12, Marathon and Lightweight are useful for players so they can assault objectives quickly. Other useful perks that benefit the AA-12 greatly are Stopping Power, which allows for better damage, and coincidentally, a greater likelihood of a one-shot kill, and Steady Aim, which allows for more precise shots with the AA-12.

The AA-12 is obtainable in the Special Ops missions "O Cristo Redentor", "Bomb Squad", "Acceptable Losses", "Estate Takedown", "Armor Piercing", and "Wetwork". It shares the rate of fire from campaign. In "O Cristo Redentor" it can be found in the bed of a truck in the starting area, and "Bomb Squad" it is found leaning against the fence in the start area. In both instances it is equipped with a Heartbeat Sensor and Red Dot Sight. In "Acceptable Losses ", it is one of the starting weapons, where it is uniquely found with Red Dot Sight, Silencer, and Heartbeat Sensor. In "Estate Takedown", it can be found in the basement armory. In the other levels, the AA-12 can be found around the map, either on the ground or from a killed enemy.

The AA-12 in first-person 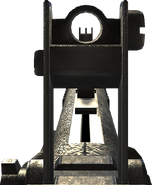 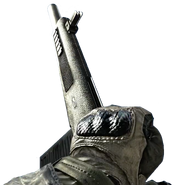 The AA-12 with Heartbeat Sensor, Red Dot Sight, and Silencer, seen only in Spec Ops

The AA-12 in third person

A Shadow Company soldier with an AA-12

In campaign, the AA-12 is a versatile weapon, having good range, high damage, and a large 32 shell drum magazine. Combined with the high damage, large shell capacity and good range, one can fire multiple shells to make a kill at medium range if needed. As mentioned before, the AA-12 is found in the later levels of campaign mode as a starting weapon, more specifically, in the levels "Training", "Closing In", "To the Rig", and "Oil Rig Confrontation".

In multiplayer, the AA-12 is the second weapon to be unlocked for the Coalition multiplayer faction, taking 150 kills with the Coalition faction to earn. Unlike the single player counter-part, the multiplayer is much weaker, needing at least 3 shots at close range to achieve a kill. Despite this lack of power, it is a great weapon to use if the player is just getting into the game, as it is one of the easiest weapons to use in the game.

The AA-12 on the Nintendo DS

The AA-12 viewed from third person

The AA-12 returns in Call of Duty: Modern Warfare 3, this time with a darker finish. It also has extra cosmetic features on it, such as a new grip, an empty spare shell holder, an ammo bag that reads 'U.S. Army', and new iron sights mounted on a permanent rail.

The AA-12 is found in three missions: "Hunter Killer", "Turbulence," and "Stronghold". The AA-12 was originally the starting secondary weapon of "Hunter Killer", but was replaced by the USP .45. in Turbulence and Stronghold, it is heavily used by Inner Circle forces. it has a higher rate of fire than in Multiplayer.

The AA-12 is the fourth shotgun available to the player and is unlocked at level 26.

The AA-12's handling characteristics are decent. The AA-12 allows users to move at 100% of the base speed, but like other shotguns, the strafe speed is an abysmal 40%. This strafe speed can come to be quite irritating for those that want to aim the AA-12. Users that want to use the AA-12 and aim in this style should consider Stalker to rectify this. The AA-12 aims down the sight in 200 milliseconds. The AA-12 reloads in one action, and is the quickest magazine reload of all shotguns, taking 2.75 seconds, or 3.58 seconds if the magazine is completely empty. In either case, the user can Reload Cancel after 2 seconds. This reload speed isn't great overall, but it is much better than the other shotguns for when the user has only a bit of ammo left in the magazine.

The AA-12's magazine capacity is decent, holding eight rounds. Much like in Modern Warfare 2, one of the AA-12's most crippling and unusual weaknesses is its starting ammo loadout. Users only get sixteen rounds total when spawning in. Considering how little damage the AA-12 does and how fast the AA-12 shoots, that sixteen round starting ammo loadout does not last long. One or both of Extended Mags and Scavenger will be desperately needed.

The AA-12 has two proficiencies that stand head and shoulders above the others: Range and Damage, with both fix crippling issues with the AA-12. Range will increase the AA-12's abysmal total range by 25%, allowing the AA-12 to be used out to a longer distance. Damage will increase the AA-12's damage per pellet at all ranges by forty percent, allowing the AA-12 to only need between five and fourteen pellets to kill compared to needing between seven and twenty pellets without Damage. If using the Specialist Strike Package, use Damage, as Range can be gained through the Specialist Bonus, whereas Damage cannot be earned in this manner.

The AA-12 has the usual assortment of attachments available. The Red Dot Sight and Holographic Sight aren't useful at all on a close-range weapon, but should still be used, if only to accrue weapon XP.

The Silencer is a horrible fit on the AA-12, reducing the AA-12's already severely limited range by 25%. The Silencer should not be used seriously on its own. It should only be used to get weapon XP.

The Grip is the only attachment of note on the AA-12 before Extended Mags is acquired. Usually the Grip is of little consequence to the shotguns. It's not super helpful on the AA-12, but due to the fully automatic rate of fire, recoil could potentially cause pellets to be misdirected, so it's not a bad idea to use this attachment.

Extended Mags is the only attachment that brings a serious benefit to the table for the AA-12. When it is unlocked, it should be used at all times, without question. It increases the AA-12's magazine capacity to twelve rounds, and increases the starting ammo loadout to 24 rounds. Both increases are desperately needed on the AA-12, as the AA-12 can dump an entire magazine rapidly, and for those that either forego Scavenger or elect to get it from the Specialist Bonus later, the extra starting ammo is monumentally helpful. No other attachment even comes close to the usefulness Extended Mags brings to the table.

For the AA-12, specific perks will be very useful. Scavenger borders on mandatory due to the AA-12 needing more shots to kill in most situations, and the fact that the AA-12's starting ammo loadout is abysmally small. Scavenger Pro specifically will make the starting ammo loadout significantly larger, so users should try to get the Pro version of Scavenger before using the AA-12. Steady Aim will also be a very lucrative choice, as the AA-12's large hip-fire spread will further exacerbate the AA-12's lethality problems. If users prefer to aim down the sight to tighten the spread, Stalker will be very useful, and Stalker Pro is very helpful for a mobile weapon like the AA-12, as Stalker Pro will make it so delayed explosives like the I.M.S. and the Claymore are much less likely to kill the user. The Specialist Strike Package is very frequently used on the AA-12 to acquire more perks, and more importantly, acquire more weapon proficiencies.

The January 25th, 2012 patch modified the AA-12 to not expel extra pellets when equipped with Extended Mags.

The AA-12 appears in both Mission Mode and Survival Mode of Modern Warfare 3.

The AA-12 is only obtainable in two levels. The first is Milehigh Jack, where it can be dropped by FSO agents. The other is Over Reactor, where the AA-12 is the secondary weapon in the loadout.

The AA-12 is unlocked at level 44 in Survival Mode and is the last shotgun to be unlocked. It costs $5000 from the Weapon Armory. It does a decent amount of damage with a very high rate of fire, making it lethal against large groups of enemies at all levels. It is advised to phase out the AA-12 for hard hitting weapons past the heavy troops as its rate of fire, poor range and spread, and lengthy reload (however, the reload can be remedied with Sleight of Hand) can be cumbersome and difficult to successfully undertake in the middle of a wave.

First person view of the AA-12 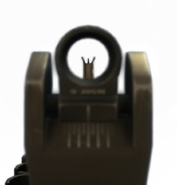 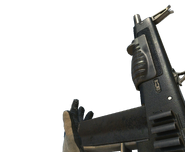 The AA-12 in third person

The AA-12 in first-person

The AA-12 appears in Call of Duty: Online as the Atchisson AA-12.

The Atchisson AA-12 in first person

The Atchisson AA-12 being reloaded

8 shells
(20 and 32 with ammunition attachments)

The JAK-12 in first person. 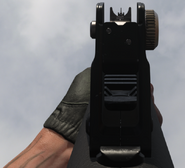 The default Iron Sights of the JAK-12.