It is known as the Gunship in Black Ops 4, Modern Warfare (2019) and Black Ops Cold War.

ac130
The AC-130 is available for unlock as early as level 10. It takes 11 kills to obtain or 10 with Hardline. The AC-130, due to its amazing firepower, high altitude flight path, and its two angel flares, is a force to be reckoned with in almost any situation.

When called in, the player will start with a thermal view from the AC-130 which gives a clear overhead view of the map from the 105mm cannon. Each cannon has a different zoom amount, with the 105mm having the least and the 25mm having the most. On its own, it is arguably one of the deadliest killstreaks in Call of Duty: Modern Warfare 2 and in tandem with Danger Close Pro, its lethality is further increased. Due to the AC-130 flying higher than any other aerial killstreak, it can't be hit with bullets and it is able to shoot down helicopters and Harriers.

While difficult, it is possible to destroy an AC-130 with the Predator Missile and RPG-7. If using lock-on launchers, it will take at least three rockets due to the AC-130 having two flares. The AC-130 should be taken out as quickly as possible if the enemy has deployed one, as the player using it may have a Tactical Nuke as their last reward.

The explosive damage on the AC-130 is affected by Danger Close, being able to maximise the blast radius of its explosive rounds.

AC-130 flying over the map Afghan. 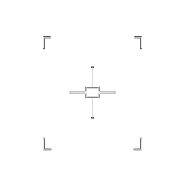 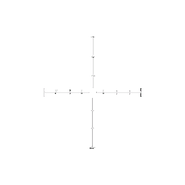 The overlay for the 40mm. 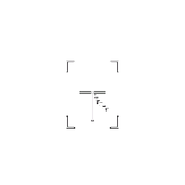 The overlay for the 25mm. 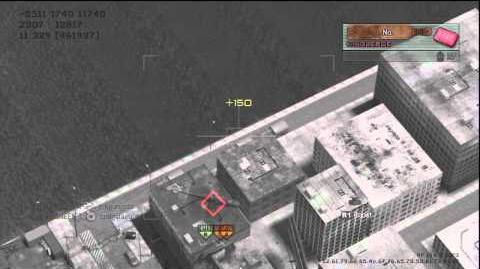 2
The AC-130 is a 12-point (11 with Hardline) Strike Chain reward, which is part of the Assault Strike Package in Call of Duty: Modern Warfare 3.

The AC-130 is in the air for forty seconds. It works just like in Call of Duty: Modern Warfare 2, but it now keeps track of the number of shots in each weapon before reloading, as well as the max capacities: One 105mm howitzer shell, four 40mm cannon shells, and twenty 25mm Vulcan rounds. It is also possible to switch between thermal and enhanced color vision at will. It will appear as 1:1, 4:4, and 20:20 respectively on the HUD, with the number on the left representing the ammo left before reloading.

The AC-130 is very good on small, open maps like Village, Dome, and Mission. Additionally, the 105mm cannon is so powerful that a single round will generally destroy any aerial killstreak including the Osprey. A single round will kill any player regardless of perks or even if they have Juggernaut armour. The aircraft has 2 flares, meaning that any one player will never be able to destroy it since a total of 3 shots are required to bring it down.

The AC-130 does not appear on the Wii version due to RAM limitations. It is also less effective on maps with large amounts of overhead cover such as Arkaden. Players can be killed while operating it unlike the Predator missile, which is already falling when activated. Furthermore, the AC-130 is unable to target the Counter UAV, UAV, and the Reaper, as they all fly higher than the gunship. An EMP will instantly bring it down, regardless of whether the user employs Assassin Pro.

An old killstreak icon for the AC-130. 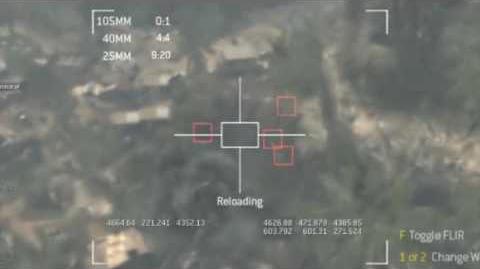 The AC-130 returns in Call of Duty Online as the Airborne Gunship. It is unlocked at Level 63 and available for use by getting 11 kills without dying.

The Airborne Gunship is very similar to the AC-130 in Modern Warfare 2. The guns now cycle 105mm to 25mm to 40mm and the user is given nine 40mm shots.

The Airborne Gunship as seen through a sniper scope. 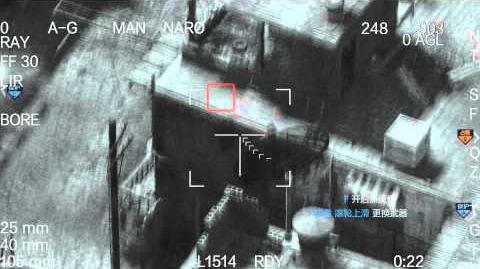 "Be the gunner in a close air support gunship."
— In-game description.

The Gunship returns in Call of Duty: Black Ops 4 as a scorestreak and is similar to its Call of Duty: Modern Warfare 2 predecessor, but with two 105mm shots instead of one.

"Be the gunner in a close air support gunship."
— In-game description.

The Gunship returns in Call of Duty: Black Ops Cold War as a scorestreak.