The ACR (referred to as Magpul Masada in the game files) is the main assault rifle used by Roach during the Task Force 141 campaign missions, and is used by other Task Force 141 members and Ghost during some missions. It is first available to the player as an optional weapon in The Pit in the mission "S.S.D.D.", where it is equipped with a Holographic Sight. It is also used in the mission "Cliffhanger", with a Red Dot Sight, Silencer, Heartbeat Sensor, and a unique arctic camouflage that is mostly comprised of natural ice and snow. An ACR Grenadier version with an ACOG Scope and Grenade Launcher is used in "Takedown", while another version featuring the Holographic Sight and Grenade Launcher is used in "Loose Ends". A version with a unique matte black finish and the same attachments as found in "Cliffhanger" can also be found in the mission "Just Like Old Times". It is possible to also receive an ACR from dead Shadow Company soldiers in their respective missions. Due to its large ammunition count, as well as its medium damage and rate of fire, and low recoil, it is an extremely good weapon, serving useful in both long range engagements, and close quarters.

In Multiplayer, the ACR is unlocked at Level 48. It is similar to the M4A1 but sacrifices rate of fire for having extremely low recoil. It carries 30 rounds in its magazine, deals 30 to 20 damage per shot, and has a rate of fire of 789 RPM. Although the ACR bounces when firing, this recoil is purely visual and the weapon has near-zero actual recoil as it resets almost perfectly before the next shot, making it ideal for long range combat without the need for burst firing. Its lower damage per second makes it somewhat weak in close quarters combat compared to other automatic weapons such as the TAR-21, F2000, and submachine guns.

A versatile weapon, most Perks and Attachments work well with the ACR, especially Stopping Power, which helps make up for its low damage per round. With Stopping Power, it takes four shots to kill at long range (versus five without the perk), three shots at close range (versus four) and two headshots at close range (versus three without the perk). Another recommended attachment is the Silencer, as the ACR's range and accuracy makes it ideal for this attachment. The ACR is very useful at long ranges so therefore it excels in medium to large maps with long lines of sight such as Wasteland, Afghan, Highrise, Derail, Estate, Bailout, and Fuel. Its extremely low recoil means that it is very easy to use with the ACOG Scope and Thermal Scope, and wasting ammo due to missed shots is usually not an issue (although it also depends on the player's skill to aim well, especially on a moving target). The ACR tends to chew through ammo quickly much like the M4A1, but its accuracy makes missing shots a lesser issue. Also, the ACR is one of the most effective weapons in the game for reload canceling; the player does not even need to wait until the magazine is fully inserted into the rifle before ammo is replenished. Even without the reload cancel, the reload time is still very quick at only two seconds.

In terms of damage output per second, the ACR's low damage and moderate rate of fire makes it the least powerful assault rifle in the game. Still, its effectively non-existent recoil ensures all properly aimed shots are on target, allowing for more expedient kills. Because of these features, it is a very popular assault rifle in Call of Duty: Modern Warfare 2.

The ACR can be found in various levels of Special Ops. In "The Pit", an ACR with Holographic Sight can be used as an alternate weapon for the course. An ACR with an ACOG Scope and sometimes with grenade launcher can be found in the initial area of "Suspension". Shadow Company troops in "Snatch & Grab" frequently use ACRs. "Terminal" has an ACR with M203 and ACOG Scope in the initial area, as well as one with just a Holographic Sight.

Like the campaign, the ACR in Special Ops has slightly more recoil than in multiplayer. Nonetheless, it is a very devastating weapon.

The ACR in first-person 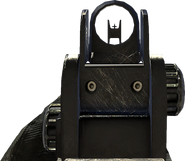 Reloading the ACR; note that the cartridges inside the magazine are in 2D

An ACR with the Unknown Arctic Camouflage, Suppressor, Red Dot Sight and Heartbeat Sensor as seen in "Cliffhanger"

The ACR in third person

The ACR returns in Call of Duty Online as the Remington A.C.R.

The Remington A.C.R. in first person

The ACR was cut from Call of Duty: Infinite Warfare, with evidence of its existence found in the game files.