The ACR 6.8 is an assault rifle in Call of Duty: Modern Warfare 3. It was first shown at the end of the Call of Duty: Elite trailer. Later, the ACR 6.8 was also seen with a mounted Holographic Sight held by Sandman, in an Amazon pre-order wallpaper.

The ACR is a rare weapon in the campaign, used by Derek "Frost" Westbrook only in the mission "Scorched Earth" equipped with a Hybrid Sight. Other friendly and enemy NPCs never carry one, and there is no way of receiving extra ammo for the weapon, though it has a high amount of reserve ammunition to compensate for this.

The ACR 6.8 is a relatively high damage per bullet weapon. It will deal a three shot kill out to around 25 meters, and deals a four shot kill at all other ranges. Headshots will reduce the bullets needed to kill by one. While this isn't the greatest damage profile, it's far from bad.

The ACR 6.8 has a mediocre rate of fire, only shooting at 705 RPM. This counterbalances the damage, and gives the ACR 6.8 a somewhat slower time-to-kill compared to other Assault Rifles.

The ACR 6.8 has average handling traits. The hip-fire cone is a moderate size, the aim-down-sights time is 250 milliseconds, and the ACR 6.8 reloads rather quickly, at 1.9 seconds, or 2.5 if the magazine is empty.

The ACR 6.8's biggest advantage is its accuracy. The ACR 6.8 is exceptionally accurate, and is very easy to control, even under fully automatic fire.

The ACR 6.8 is also one of the best guns in hardcore because it will always deal one shot kills at any range.

The ACR 6.8's weakness is its average time-to-kill. It's not the worst, but an accurate player that sees little need for the ACR 6.8's accuracy bonus is just hampering themselves by using the weapon.

The Silencer is a good attachment to use, as the ACR 6.8 sees little penalty from using the attachment. With the somewhat long time-to-kill, the Silencer can help the player from being targeted by those reliant on the mini-map.

The underbarrel attachments, the Shotgun and the Grenade Launcher, can prove somewhat useful on the ACR 6.8 due to its versatility, and that the ACR 6.8 isn't very dependent on a certain attachment. Using said attachments can expand one's arsenal on the battlefield.

The Heartbeat Sensor is a risky attachment, as Assassin Pro users are invisible from its radar. The heartbeat sensor can be useful to detect unsuspecting enemies.

Extended Mags increases the magazine size to 45 rounds, which allows the user to shoot for more prolonged periods of time, and lessens the need to reload. It's also useful in the fact that it supplies extra ammunition, making less of a need for Scavenger.

Due to the ACR 6.8's versatility, it isn't very dependent on certain perks or attachments to work well. Due to this, most attachments and perk selections work well on the weapon.

In conclusion, the ACR 6.8 is a dependable weapon that won't do much wrong, but doesn't give much reward for its use, due to the slower time-to-kill. Due to the extreme accuracy, the ACR 6.8 can be very deadly on the battlefield, and its popularity is reflected by the community as such. The ACR 6.8 is a solid weapon that many turn towards due to its reliability.

The ACR 6.8 is available for both Survival and Mission modes.

The ACR 6.8 is a starting weapon in the Mission Mode challenge Stay Sharp and Black Ice. In "Stay Sharp", it is bare, while in "Black Ice", it has a Holographic Sight equipped. If playing on co-op, the gunner will have access to the ACR 6.8 while driving to the base.

The ACR 6.8 is available in Survival Mode at level 14 and costs $3000. It is a starting weapon on Off Shore, with an ACOG Scope and Underbarrel Shotgun.

The ACR 6.8 is used by commando troops in later waves, which allows the player to scavenge their ammunition after killing them. The ACR 6.8 is a solid overall weapon in Survival because of its low recoil and rather high damage, which makes it effective at all ranges. As with all weapons, it is advised to go for headshots in later waves to speed up killing time and to save ammo.

Reloading the ACR 6.8. Although the magazine looks empty, if looked at closely, it appears that there is a shaded cartridge in the magazine.

A third person view of the Thermal Scope on the ACR 6.8.

A Delta Force soldier with an ACR 6.8 with Red Dot Sight attached.

Russian Commando firing his ACR 6.8, in Survival Mode on the map Lockdown.

The poster of Sandman wielding the ACR 6.8 with a Holographic Sight.
Add a photo to this gallery 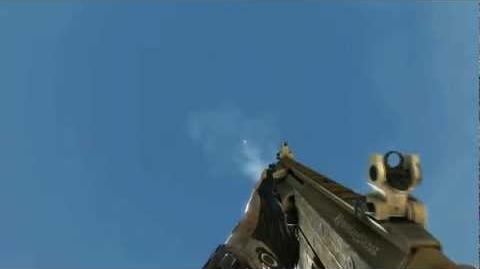 Modern Warfare 3 - ACR 6.8 Demonstration
Add a photo to this gallery

Retrieved from "https://callofduty.fandom.com/wiki/ACR_6.8?oldid=2238755"
Community content is available under CC-BY-SA unless otherwise noted.