Call of Duty Wiki
Register
Don't have an account?
Sign In
Advertisement
in: Call of Duty: Advanced Warfare Assault Rifles

For the similarly named launcher, see AT4.

The AE4 is a directed energy assault rifle featured in Call of Duty: Advanced Warfare. The AE4 and its variants were released on December 11 (in early access) for Season Pass owners on Xbox One and Xbox 360 and was released on January 13, 2015 for the other Season Pass owners on other platforms.[1] The weapon is part of the first downloadable content pack for Call of Duty: Advanced Warfare Havoc. [2] As of an update in February 2015, the AE4 is now available in Exo Survival.

The AE4, like all DLC weapons, is unlocked by default once one has purchased the Havoc DLC.

The AE4 is a very high-damage weapon. Out of 16.5 meters, it deals 34 damage per shot, resulting in a three-hit kill. Afterwards, it deals 33 damage out of 40,6 meters, and 30 damage beyond, always resulting in a four-hit kill. Its long range damage is the highest of all assault rifles in the game. Its range is decent, which is about twice the range of the Bal-27. Headshots give a bonus of 1.2x, allowing for a three-shot kill at any range.

The AE4 is a very accurate weapon. The recoil is low, and the sight is clean. Optical attachments are not necessary, but the ACOG Scope is useful to bolster the weapon's long range capabilities.

The AE4's biggest weakness is its abysmally slow rate of fire; 500 RPM, making it difficult to kill if the enemy is using a weapon with very high rate of fire. Additionally, the AE4 is incapable of surface penetration, and therefore cannot shoot through objects, offsetting its high damage. Furthermore, the shot limit is fairly low; the AE4 overheats at 20 shots. Using the Widowmaker variant reduces the shot limit by two with and without the Heat Sink. The Heat Sink is then a great attachment to use as it increases the shots limit to 25.

The biggest strength of the AE4 is its accuracy. The high accuracy plays well with the damage output it has, allowing players to easily land hard-hitting shots. Additionally, the AE4 is always a one-shot kill in Hardcore except on players using Exo Stim. Another strength is that it has unlimited ammo, making Scavenger utterly useless.

The AE4 has some good variants to use. The Supernova and Gigawatt both increase the medium damage to 34, extending the three-hit kill range to 40.6 meters, making the weapon more suited for long-range engagements. As well, the Gigawatt reduces the ADS time by 50 milliseconds, making the use of a Quickdraw Grip unneeded. However, the Supernova decreases hip-fire accuracy by 10%. The Gigawatt has more drawbacks, reducing hip-fire accuracy by 20% and the three-hit kill range to 35.5 meters. Moreover, the Gigawatt gains new, obstructive iron sights that are similar to the M60E4's, making the use of an optical attachment high recommended. Generally speaking, the Supernova is a better choice as it has a higher hip-fire accuracy than the Gigawatt, and does not features the range nor iron sights downside, at the cost of not having a faster ADS time.

The Vaporizer variant increases the overheat time by 20%, making the weapon more durable during long firefights as it will overheat after 25 shots instead of 20. This overheat time can be further increased by equipping the Heat Sink attachment which further increases the amount of shots to overheat to 31 shots. However, the Vaporizer decreases the minimum damage from 30 to 24, making it a five-shot kill at long range, and has 10% more recoil per shot, though considering the AE4's high accuracy, the recoil drawback is barely noticeable. The Vaporizer is overall suited for medium range engagements, but is best avoided at long range considering it needs one more shot to kill at long range.

The AE4 can be unlocked at round 14 in Exo Survival, and costs three upgrade points. Unlike its multiplayer variant, it cannot be equipped with a Heat Sink for unknown reasons.

It is a good weapon for players who do not want to worry too much about running out of ammo but want to be able to move relatively fast; a trait the EM1 and EPM3, the other two directed energy weapons in the game with infinite reserve ammo, do not have. It is also good if the player would rather have the Light Exo than the Heavy Exo which the player must have in order to use the EM1 or EPM3. Some of its downsides are its inability to penetrate enemies and its low rate of fire, though these are a problem with the EM1 and EPM3 as well. Plus, at the point the player can buy the AE4, the EM1 could be had, as it is given to the player for free at the start for the Heavy Exo class. However, the EPM3 is unlocked a round later than the AE4.

The IMR can be a good alternative to the AE4 because, although it does not have infinite ammo, it does print extra reserve ammo every few seconds; meanwhile the IMR also has the ability to penetrate enemies as well as high damage. Still, the AE4 is fully automatic and does not need to wait for reserve ammo to recharge.

The AE4 also appears in Exo Zombies. It can be acquired from the 3D Printer for 1000 credits, and is used by Sentinel Reinforcements in the map Carrier and Descent. Unlike its multiplayer and Exo Survival counterpart, it does not have unlimited ammo. It has 70 shots per magazine, but never overheats.

It has one of the highest magazine capacities of the mode (close to the Pytaek's 125 rounds), and reloads quite fast, which make the use of Exo Reload optional. It is also accurate. However, the damage per shot is low, and the player is likely to burn through ammunition quickly. In addition, its penetration power is poor compared to other weapons. Overall, it is not an ideal weapon to use as the reserve ammo is very low, added on top of the rate of fire and relatively low damage per shot which could leave the player dependent on Full Reload or their other weapon after one or two rounds.

However, when upgraded, the AE4 becomes a powerful assault rifle. At Mk 4 upgrade, it gains an Auto Focus Sight which allow the player to be more accurate. At Mk 10 upgrade, the magazine capacity increases to 105 rounds (being higher that the Ameli's 100 rounds), and the reserve ammunition increases to 210 rounds, which give the player a total amount of available shots of 315, which is higher than the Bal-27's 275 (as it does not get ammunition upgrades). As such, a fully-upgraded AE4 is one of the - if not the - best assault rifles available in Exo Zombies, having a relatively high damage per shot, high accuracy, high magazine capacity and short reload time.

Render of the AE4's model.

The AE4 in first-person. 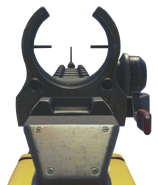 The iron sights of the AE4. 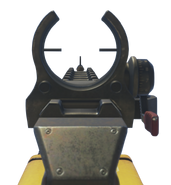 The iron sights on the Next Gen consoles prior to release of the Havoc DLC.

Reloading (or cooling down), the AE4.

Concept art of the AE4.

Concept art of the AE4 - Widowmaker.

Promo for the AE4.

Promo for the Widowmaker variant of the AE4. 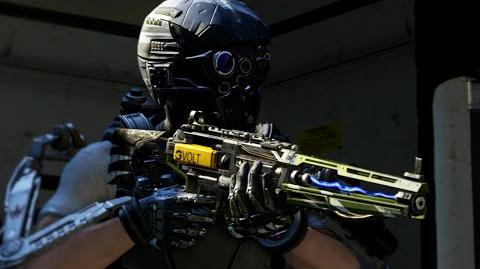