Cobras played a significant role in the USMC military invasion of the unnamed Middle Eastern country in Call of Duty 4: Modern Warfare. The first sighting is in "The Bog" where Lt. Vasquez calls support from two Cobras to attack a building full of enemies. The most significant role is in "Shock and Awe" where they fire at infantry and armor. The last sighting in Call of Duty 4: Modern Warfare is also in "Shock and Awe" when the nuke goes off.

When a helicopter is called in during a multiplayer session, the Marines and SAS will get Cobras. OpFor and Spetsnaz will get the Mi-24 "Hind" helicopter.

At an early stage of development, the AH-1 Cobra was intended to be fully flyable by the player.[1][2]

Two Cobras in "The Bog".

Another Cobra in "The Bog".

An AH-1 being reached by a nuke in "Shock and Awe".

In Call of Duty: Modern Warfare 2, the Cobra does not appear in the campaign or the Special Ops mode as an Attack Helicopter, only as props in the airplane graveyard in the level "The Enemy of My Enemy" in campaign mode, as the Cobra is only used by the US Marine Corps; the Army use the AH-64 Apache. It is only used in multiplayer matches.It is however mentioned in the radio chatter throughout the campaign giving airsupport and gunstrikes to Marine units.

An AH-1 Cobra in multiplayer.

Cobra in the vehicle boneyard.

An AH-1 over Afghan.

In Call of Duty: Black Ops, the AH-1 Cobra is used as the Attack Helicopter killstreak reward for all factions. A few can also be seen during the defense of Khe Sanh in the level "S.O.G.". 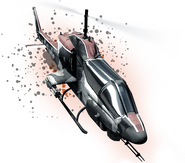 The ELITE icon for the Attack Helicopter.

The AH-1 Cobra is seen in the artwork of the Battle of Berlin, attacking Russian tanks. A Cobra is also seen being destroyed by a SAM Turret firing on it in the Tango Down trailer. It was also seen in one of Yuri's flashbacks flying very fast through the area.

A Cobra can be seen at the end of the Special Ops mission Hit and Run.

Notice there is no pilot in it.

A Cobra engaging enemies in multiplayer.

Texture for the AH-1.

Texture for a damaged AH-1. 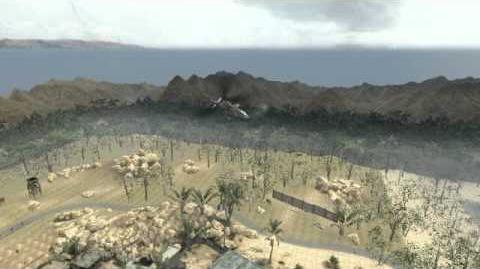 AH-1W gets destroyed
An AH-1W's evasive maneuverings and destruction in Call of Duty: Black Ops.