AH-6 Overwatch is a 9-point (8 with Hardline) Strike Chain reward in the Assault Strike Package that appears in Call of Duty: Modern Warfare 3.

AH-6 Overwatch is an AH-6 Little Bird that hovers over the player as they travel through the map, and will attempt to kill any enemies encountered. The AH-6 conveniently takes about three-five seconds to arrive, and lasts for 60 seconds before leaving unless it's destroyed. It is equipped with two very powerful miniguns almost identical to the sentry gun, including its effective range. As with all other helicopters, the AH-6 will not engage enemies with Blind Eye. In general, the AH-6 overwatch is favored in more mobile runner classes.

In order to engage an enemy, the helicopter must be facing in the right general direction, which depends on the player's position. When an enemy is encountered, the AH-6 will shoot at the enemy player until the enemy is killed, until the player is killed and respawns, or until the killstreak itself runs out. It should be noted that it will not disappear after the player is killed; it will simply follow the player back to where they spawned. It is often useful to not respawn immediately, as the AH-6 will stay in the place you died, which may pay off if the area you died in is full of enemies.

The AH-6 has one set of flares to defend itself, so two shots from any missile launcher or SAM Turret is required to destroy it. However, because of its low flying attitude, any guided missile launcher can take it out with one hit, provided they are directly beneath it so that the flares cannot divert it immediately. Despite this, the AH-6 is quite nimble, and can sometimes sidestep missiles fired at it. It can also be destroyed with about two magazines of an assault rifle or one well thrown EMP grenade.

The AH-6 can be used as a 'personal escort' for heavily aggressive players or those who expect to be constantly on the move. Respawning immediately is not advised, since the copter will linger around the player's death area, which could allow it to take down a multitude of enemies.

The helicopter can be destroyed with two shots, and can be targeted by SAM Turrets. Its low flight path makes it vulnerable to machine guns and EMP grenades. Enemies who employ Blind Eye are immune to it.

Another view of the AH-6 Overwatch.

Front view of the AH-6 Overwatch.

The underbelly of the AH-6 Overwatch as it opens fire. 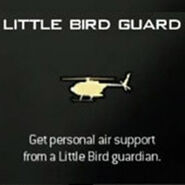 An old killstreak icon, calling it the Little Bird Guard.