It is seen used by the Ultranationalists, the Middle-Eastern OpFor, and Nikolai once he is rescued in "Blackout" and during the subsequent level, "Hunted". The movement speed when aiming down the sights is slower than in multiplayer, making it act more like an assault rifle than a submachine gun.

In the level "F.N.G." it is seen with a GP-25 Grenade Launcher attachment, however, it cannot be used and is not seen again in the game.

The AK-74u can be customized with a Red Dot Sight, Silencer, or ACOG Scope. The AK-74u is fairly similar to the MP5, in that both weapons have the same damage, rate of fire and range. It is tied with the MP5 in terms of damage output (40-20, or 3-5 hits to kill), has less recoil despite the visual kick, and much better wall penetration at the cost of more idle sway and lower hip fire accuracy when using a Red Dot Sight or Silencer (same as an assault rifle).

The AK-74u appears in Old School Mode with 30 rounds in the magazine and 60 rounds of reserve ammunition. 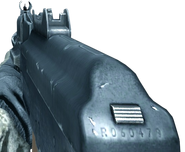 Reloading; note that the cartridge is in 2D

AK-74u with a Grenade Launcher as seen in "F.N.G." (Unobtainable)

Reloading the AK-74u; the cartridge is now in 3D

The AK-74u was cut from game; however, the texture and menu icons still remain in the game files. 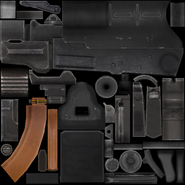 The AK74u appears in the missions "Crash Site", "Rebirth", and "Redemption". It is used commonly by the Spetsnaz forces, and can be found with varying attachments.

The AK74u is available for purchase upon reaching Level 17, and costs

The AK74u's fire rate is low for an SMG. The AK74u will fire at 750 RPM. This makes the AK74u less forgiving up close due to a slower fire rate, and at a distance, it will have the slowest time-to-kill ratio of all SMG's (as all SMG's will five shot kill with minimum damage), tied with the MP5K and the Skorpion.

The AK74u's accuracy is superb. The iron sights are very clean, and the AK74u will kick up and to the sides equally. However, the AK74u has a good centerspeed of 1600. Combined with the good centerspeed, low fire rate, and medium kick values, the AK74u is one of the more accurate SMG's in its class. As well, on console, the AK74u has the auto-aim range of an Assault Rifle, and will get more assistance from the game's auto-aim than other SMG's (bar the Kiparis, which shares this trait). Generally speaking, the auto-aim will stop working entirely when the AK74u starts dealing minimum damage.

The AK74u's handling traits are great as an SMG. It will allow the player to move at 100% of the base speed, aim down the sight in a fast 200 milliseconds, and the hip-fire spread is small, making hip-fire reliable up close. The AK74u also reloads very fast, being able to Reload Cancel at 1.3 seconds, giving it the fastest reload of any SMG with a 30/32 round default magazine.

The AK74u also has the good magazine capacity, coming in at thirty rounds. This allows the user to engage in sustained combat for longer, and due to the low fire rate, it won't make reloads anywhere near as often as other SMG's.

The AK74u has easily the widest range of attachments for an SMG. The optical attachments do little to the AK74u, as it is already extremely accurate. The AK74u will use the Russian Red Dot Sight frame and will use the PK-AV as the default ACOG Scope.

The Suppressor is an ill fit on the AK74u. As an SMG, one of the AK74u's more important niches is its high damage up close. By making the AK74u have less range, it becomes much weaker as an SMG.

Extended Mags and Dual Mag are both decent options on the AK74u, increasing the magazine capacity to 45 rounds, or making every second reload a bit quicker and gaining two extra magazines, respectfully. On the AK74u, Dual Mags would likely be the better option, since the AK74u already bears a 30 round magazine, and with the AK-74's nature, it doesn't go through ammunition quickly like other SMG's.

Rapid Fire is a great attachment choice on the AK74u, raising its fire rate to 1000 RPM. With the combination of a three shot kill up to twenty meters and 1000 RPM, the Rapid Fire AK74u is one of the best close quarter weapons on offer. However, Rapid Fire will make the AK74u less accurate, and unable to use Extended Mags or Dual Mags in conjunction with it.

The AK74u is available off the wall for 1200 points on every Zombies map, excluding the classic maps and Dead Ops Arcade. It has low recoil, a moderate fire rate, a 20-round magazine with 160 reserve rounds and high damage (one-hit-headshot until round 5). It is renowned for its power, but a low magazine and somewhat slow reload means every bullet counts in the heat of battle. It makes a great weapon for survival early on, as it holds a lot of ammo in reserve and deals great damage. Speed Cola is recommended in later rounds, as players will constantly reload the small magazines.

When Pack-a-Punched via the Pack-a-Punch Machine, the AK74u will become the AK74fu2, with double its magazine size and gets 280 extra rounds, and an added Red Dot Sight with a unique randomized reticule. The AK74fu2's one-hit-headshot potential lasts until round 11.

The AK74fu2 is arguably one of the best Pack-A-Punched gun available off the wall, alongside the M16, MP40 and the Stakeout. An advantage it has over guns exclusive to the Mystery Box is that ammo can be bought off the wall. The Pack-A-Punched MP40 does deal more maximum damage than the AK74fu2, but the AK74fu2 has more ammo, as well as having a higher base damage. However, the M16 or Stakeout are far better choices for guns on the wall, as they have better/more features than the AK74fu2. However, the AK74fu2 has more ammo and better damage than the M16 and is equipped with a Red Dot Sight and builds points much more effectively than the Stakeout , and is lighter than the M16.

On Moon, the AK74u is easily the best gun to Pack-a-Punch as its ammo can be hacked and made available for only 600 points. That coupled with its convenient location on the moonscape make it a fantastic point-builder up to about round 28, or even beyond if the full easter egg has been completed.

First-person view of the AK74u 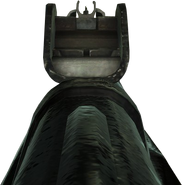 Diving with the AK74u

Render of the AK74u

Side view of the weapon

The AK74u in Call of Duty: Black Ops Zombies

The AK74fu2 in Call of Duty: Black Ops Zombies

Aiming down the sight of the AK74fu2 with its random reticles

Two AK74us on a rack in the Zombies map "Five" 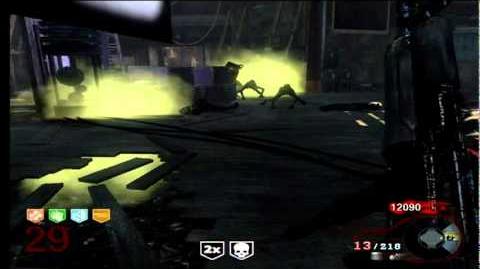 The AK-74u returns in Modern Warfare 3, exclusive to the Campaign and Spec ops.

The AK-74u is a weapon used by the Russian Military, which can be found in the missions "Turbulence", "Bag and Drag", "Iron Lady", "Eye of the Storm", and "Stronghold". It is very similar to the Call of Duty 4: Modern Warfare variant in the general aspect with stats and iron sights akin to its older iteration, but is more modernized, with a metallic and grey finish, rails on the receiver and handguard, a folded stock and black magazines. It is not available in multiplayer nor Survival Mode.

It can be found in several Special Ops missions, such as "Stay Sharp", "Milehigh Jack" and "Hostage Taker".

The AK-74u seen in Call of Duty: Modern Warfare 3 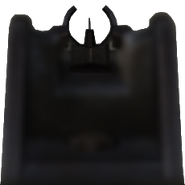 The AK-74u in third person

The AK-74u seen in the Redemption trailer

Unusable AK-74u with all attachments, including some that aren't available for the weapon in-game (Grip, Holographic Sight, HAMR Scope and Thermal Scope)

The AK74u returns in Call of Duty: Black Ops II in the campaign and Zombies.

The AK74u is available in the customizable loadout. Unlike in Call of Duty: Black Ops, this weapon cannot be equipped with an ACOG Scope or a Grenade Launcher.

It can be found on the left wall of the shack in the Power Plant on TranZit for 1200 points, in the truck in the middle of Nuketown Zombies, outside on the most bottom accessible floor in the building containing the power switch in Die Rise, in the gunsmith shop in Buried, and near Generator 3 in Origins. Note that in Buried someone will pick up its chalk, which they can then place strategically in the chalk outlines scattered across the map. It performs nearly identically to its Call of Duty: Black Ops counterpart, and works well on all maps.

In Die Rise and Buried, it is not advised to acquire the AK74u, due to the fact that there are weapons that can serve its purpose better, such as the PDW-57 and the AN-94. These weapons can also be placed in the very same location that can be placed with the AK74u, along with the ability to Pack-A-Punch them more than once.

The AK74u in Zombies

Fully-Automatic
The AK-74u returns in Call of Duty Online as the AKS-74U.

The AKS-74U in first person.

The AK-74u was added to Call of Duty: Black Ops III multiplayer on May 23, 2017, only available through the Black Market[1]. It has an unpainted wooden handguard similar in length to the Modern Warfare Remastered version.

On July 10th, 2017, the AK-74u was added along with the 1911 to the remastered versions of Nacht der Untoten, Verrückt, Shi No Numa, Kino der Toten, Ascension, Shangri-La, Moon and Origins. It can be found in the Mystery Box, where it comes with a Reflex sight and Laser sight by default but only on the maps Kino der Toten, Ascension, Shangri-La and Moon. On Nacht der Untoten, Verruckt, Shi No Numa and Origins, the AK-74u does not come with any attachments out of the box. It now has a 30-round magazine by default, unlike in previous Zombies iterations.

Its silhouette also makes a appearance on the icons for the Wall Power and Secret Shopper GobbleGums. 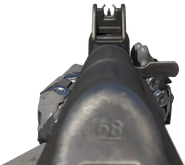 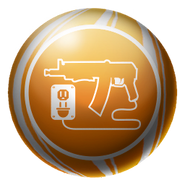 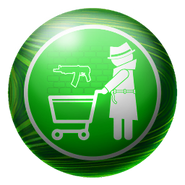 The silhouette of an AK-74u can be seen on the Wall Power Elixir.

The AK-74u returns in Call of Duty: Mobile as the RUS-79U. Initially, it was referred to as the "AKS-74U", but the name was changed in Season 3 update. It also features different model and a stock by default.

The RUS-79U has a great rate of fire along with low horizontal recoil, which makes it suitable for close-mid range gunfights. While its time to kill is not as low as other SMGs, it makes up for it in mid-range capability and versatility.

The gun has mediocre damage but also has good rate of fire and good hipfire accuracy. It is available as Uncommon and Epic blueprints, with both of them having increased mobility due to the No Stock attachment.

The RUS-79U in first person

The AK-74u returns in Call of Duty: Black Ops Cold War. It is visually similar to its appearance in Black Ops III, with an added folding stock and Bakelite magazine.

The AK-74u is used by Soviet Armed Forces and Spetsnaz soldiers through the campaign, KGB officers in "Desperate Measures", and Tropas soldiers in "End of the Line". It first appears in "Nowhere Left to Run", where it's among the three weapons that can be selected in the trunk of the car. Russell Adler wields an AK-74u in "Desperate Measures" when assaulting the KGB's archive bunker.

The AK-74u is available in the Zombies map Die Maschine, and can be used as a starting weapon, or acquired as a wall weapon for 2250 points, and from the Mystery Box for 950 points. If acquired from the wall, the AK-74u acts as a Tier 2 weapon with three randomized Attachments.