The AMR9 (referred to as the hmr9 in the game files) is a burst fire submachine gun that appears in Call of Duty: Advanced Warfare. It has the unique capability in its class to be able to mount an underbarrel grenade launcher.

The AMR9 is a starting weapon in "Manhunt" and can be found in "Atlas" and "Armada". Additionally, in the PC and current-gen versions of the game, it is used by enemy Atlas Corporation forces in several missions, though in "Captured" they use it in all versions of the game.

The AMR9 is unlocked at level 44, being the last submachine gun unlocked.

The AMR9 is a five round burst SMG, with a 50 millisecond burst delay in between bursts. This allows the user to fire the AMR9 up to a potential 800 RPM. While this rate of fire rivals the SN6, the AMR9 has the lowest maximum rate of fire, as the ASM1 can fire at 857 RPM before linearly decreasing to 759 RPM within eight shots, and that the AMR9 must be firing at the maximum potential to achieve its fire rate, whereas the SN6 can simply hold the trigger to acquire its fire rate.

The AMR9 makes up for its weird damage and rate of fire qualities in the accuracy category. The iron sights may be a tad small for the liking of some users, but the AMR9 has exceptionally low recoil, possessing mostly the same recoil per shot as other SMG's, but it has an elevated centerspeed value of 1500, counteracting the small recoil per shot very efficiently.

The AMR9 has above average handling characteristics for a submachine gun. The AMR9 will aim down the sight in a quick 200 milliseconds, will allow the player to move at the default base speed, has a tight hip-fire box, and reloads quickly in most cases, taking as little as 1.25 seconds to do a regular reload, as little as 1.35 seconds to perform an empty reload, a swift 0.8 seconds for a speed reload, and a swift 0.95 seconds when performing a reload impacted by Dual Magazine. However, the animations for all of these reload times are about 500 milliseconds to 800 milliseconds longer than the Reload Cancel speeds stated above.

The AMR9 has an above-average magazine capacity for its class, sitting at 35 rounds, or seven bursts. The player will spawn with 140 rounds of ammunition available for use when spawning by default. Using Extended Mags will increase this magazine capacity to 52 rounds, one of the largest in the SMG category (tied with the ASM1 for the second largest), and will make the user spawn with 210 rounds total by default. However, there is a caveat to this, as 52 is not divisible by 5, and as such, will make the AMR9 have ten bursts to fire, plus one two round burst at the very end. It should be noted that the AMR9's five round burst nature, combined with its low damage outside of close quarters, will commonly make the player waste more ammunition than need be.

The AMR9 has an unusual assortment of attachments, as the Grenade Launcher is available for usage. Due to the AMR9's enhanced movement speed compared to Assault Rifles, this allows the user to move very quickly while still having the Grenade Launcher at their disposal, a unique advantage. The Foregrip reduces per shot recoil, allowing the user to fire more accurately. However, the AMR9 has low recoil per shot by default, as well as a high centerspeed for its category, making the use of a Foregrip questionable.

The AMR9 has the usual assortment of optical attachments at its disposal, and it is up to the player's preference whether or not they invest in one. Most sights will give a zoom enhancement over the AMR9's iron sights, however, which makes the high zoom options a bit less appealing.

The Laser Sight will tighten the AMR9's hip-fire spread somewhat, but the effect isn't very strong. The Parabolic Microphone will highlight suppressed weapons' fire on the player's mini-map, making more rush-oriented players capable of sniffing out stealthy users who happen to be too reliant on their Suppressor for stealth. However, the effect only occurs when the AMR9 is currently being used by the player, and when the mini-map is available. The Tracker can prove advantageous when fighting users outside of the AMR9's optimal range, as, even if the player doesn't kill them, it significantly helps the players' teammates by painting them on the mini-map. However, Low Profile will counteract this effect if the victim is using it.

The Stock and Quickdraw Grip both improve the AMR9's handling traits by augmenting the strafe speed and by shortening the aim down sights speed to a mere 100 milliseconds. However, as the AMR9 is a submachine gun, the Stock's benefit isn't too useful, as the AMR9 has one of the fastest strafe speeds by default.

Rapid Fire will increase the AMR9's fire rate by 25%, pushing the AMR9's fire rate up to 1000 RPM. However, with such a bonus, there comes severe downside: the three shot kill range is reduced by 15% , the hip-fire spread is increased by 20%, and the recoil per shot is increased by 20%. As well, because the AMR9 is firing at a faster rate, the centerspeed can't as efficiently cope with the recoil, making the AMR9 much less controllable on the accuracy front. Despite these detriments, the range loss and recoil increase can be countered with Advanced Rifling and Grip, respectively.

The AMR9 has a few good variants to offer. The Pro Pipe and Royalty variants increase the medium damage to 33 and the minimum damage to 20, which will make the AMR9 have a four shot kill at any range shorter than 25.6 meters, while having an infinite five shot kill range, and no six shot kill whatsoever. As well, the AMR9 will get a free Grenade Launcher attachment. However, both variants will decrease the fire rate to a class-low 631 RPM, making the AMR9 fare worse in close quarters combat, and have an overall longer time to kill ratio if the user should need multiple bursts in a gunfight. Rapid Fire is effective to counter the low fire rate, although equipping the said attachment increases viewkick and hip-fire spread by 20% and decreases the four-hit kill range.

The Hipshot and Shorty variants will both increase the rate of fire to 1090 RPM per burst, making the AMR9 much more powerful in close quarters combat. The Hipshot also has a 180 millisecond aim down sights speed instead of 200 milliseconds, making it have one of the quickest aim down sights speeds if combined with the Quickdraw Grip, aiming in just 90 milliseconds. However, both variants will decrease the minimum damage value to 16, making the AMR9 a seven shot kill at long ranges, with the Hipshot also increasing recoil per shot.

The AMR9 appears in Exo Survival. It costs 2500 to upgrade each time and costs 1000 points to buy off the wall. It has relatively weak damage, best in class handling, and a decent fire rate. It is a unique weapon in the SMG classification of guns, due to it being the only burst-fire submachine gun in the game. It is also unique among burst-fire weapons in that it is the only to be a five-round burst. However, these two things are not really good qualities, due to the fact that burst-fire weapons go through ammo quicker because the player cannot control the number of shots fired.

This is even worse on the AMR9, due to it being five rounds fired. Still, that is five rounds that could hit a target compared to only three, or four, or two. Besides that, it has a high round unlock and a high upgrade point value. Plus, due to the lack of the Grenade Launcher in Exo Survival, the weapon's main perk is gone. Overall, it is statistically an average weapon that it may be better to pass over for a full-auto SMG, though it is up to the player's preference.

The AMR9 appears in Exo Zombies, in the maps Outbreak, Infection, Carrier and Descent. It is available as a wall weapon in the Main Hub opposite Exo Slam in Outbreak and opposite the Atlas Command Center trailer in Infection. It costs 1,000 credits to buy.

Due to it being in one of the first rooms available, relatively low price, good magazine size of 35, and burst fire configuration, the AMR9 is a great weapon for purchase in the early rounds to rack up points. As well, it reloads rather quickly, and has great movement speed, meaning the player is less likely to be overrun by Zombies.

An upgraded AMR9 is a very powerful weapon, although the Thermal Scope received at Mk4 upgrade might make using the weapon more difficult that a weapon with iron sights, or other optics.

The AMR9 in first person 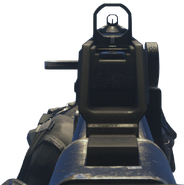 Reloading; note that the magwell indicates the 5.56x45mm chambering.

Using the AMR9 one-handed in the campaign mission "Captured"

Gideon with an AMR9 in "Captured"