For a similarly named aircraft, see An-124.

The AN-94 is featured as a common weapon throughout the entire game. It is available to pick up frequently in the USMC missions and the first and third SAS ones. It has very high accuracy and high power as well as the highest ammo capacity and reserved ammo of all assault rifles, though the sights are a bit obstructive. It is capable of taking out an enemy in one or two shots to the torso or higher, unless it is a headshot, which would result in a one-hit-kill. It is probably the most common weapon alongside the AK-74.

The AN-94 is an assault rifle unlocked for the Insurgents factions after the Skorpion with 150 kills. The AN-94 is favored by most players due to its controllable fire rate, high accuracy and high power, as well as more ammo capacity and larger magazine. The AN-94 can take down multiple enemies due to its 30-round magazine and high rate of fire. The weapon also features a low muzzle flash and visual kick. However, the AN-94 suffers from its obstructive rectangular iron sights. Due to this, most players prefer to hip fire with the weapon while crouching. Overall, the AN-94 is a fairly decent weapon to use in multiplayer for its advantage in power, accuracy, fire rate and ammo capacity.

AN-94 HUD
Add a photo to this gallery

The AN-94 is one of the common assault rifles in the campaign, as it's mostly used by the Mercs and Yemeni Militia. DeFalco is seen holding it in the mission Achilles' Veil when the player is forced to either shoot Harper or Menendez. The AN-94 is unlocked when Suffer With Me is completed.

"Fully automatic assault rifle. The first 2 rounds of each burst are fired at a faster rate."
— Description in Create-A-Class

The AN-94 is the last weapon to be unlocked in the assault rifle category, and is unlocked at level 55. It is fully automatic, with the first two rounds of each burst firing at a faster rate. Because of this ability, the Select Fire attachment is not necessary to fire in manual bursts. The AN-94 will kill in three bullets out to mid-long range and up to five at a distance (four if one is a headshot), but lacks the stopping power to ensure a two-headshot-kill before the damage drop-off. The iron sights of this weapon are very clear, meaning that an optical attachment is not required. With the Select Fire attachment, the AN-94 can be switched to a two-round burst weapon with extremely low recoil. The player can mimic this effect on fully automatic by lightly tapping the trigger, which may lessen the need for Select Fire in many circumstances (although Select Fire is still preferable for long range engagements).

The Suppressor is another excellent attachment for this weapon as the muzzle flash is reduced aiding in accuracy, and the added stealth effect makes it well-suited for more close to mid range firefights. The AN-94 kicks 5% less on its first shot fired when the trigger is pulled, and this decrease in recoil is made more noticeable by the increased accuracy over its first two shots due to the higher fire rate. In addition, the faster initial rate of fire means that the AN-94 is capable of outgunning most submachine guns with perfect accuracy. Depending on play-style, the Adjustable Stock and the Laser Sight go hand in hand with the Suppressor, much like many submachine guns.

It should be noted that using the Select Fire attachment will make the weapon fire in two round bursts, compared to the usual three round bursts. Due to the AN-94's faster rate of fire on the first two shots, a skilled player can potentially fire faster than a default AN-94.

In the July 23rd update, the AN-94's three-shot-kill range was reduced by 15% from 29 meters to about 24.5 meters. However, the gun's four and five shot ranges remained the same, so as not to hurt the weapons effectiveness too badly.

The AN-94 is available in Zombies. It is purchasable off the wall in Die Rise, Buried and Borough for 1200 points. In Die Rise, it is located in the upside down building, facing the player when they come out of the lifted elevator shaft. In Buried, its chalk outline is found in the Gunsmith shop and can be placed at any of six predetermined locations. In Borough, it is located at the mansion to the right of the door. For a weapon off the wall, it is a very effective weapon, more so than many weapons available from the Mystery Box, due to its high accuracy and fire rate as well as good damage and a high reserve ammunition capacity of 300 rounds. Furthermore, the ability to purchase its ammo from its chalk outline makes it a reliable weapon to carry around. Even when it is not Pack-a-Punched, it is still effective in later rounds, especially with Double Tap Root Beer to keep its damage rate against zombies relatively high.

When Pack-a-Punched, it becomes the Actuated Neutralizer 94000. It has a 50-round magazine and 600 reserved ammo, as well as increased damage. Initially, it will come with a Reflex Sight equipped, but is able to cycle through attachments by Pack-a-Punching it again for 2,000 points. These other attachments include the Target Finder, the Foregrip, and the Millimeter Scanner.

The AN-94's early Create-a-Class icon.
Add a photo to this gallery 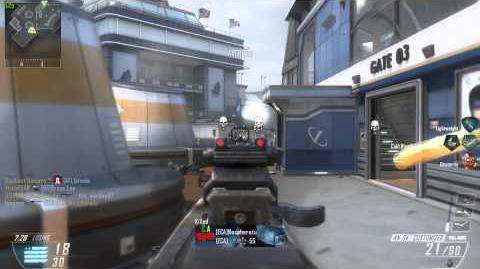 The AN-94 appears as the AP-96 in Call of Duty: Strike Team. It is not unlocked in-game unless the player buys the "Balanced Package" Care Package which includes a new perk called "Rifleman" which increases the damage of assault rifles, a Frag Grenade, a Claymore, a Health Kit, and the AP-96. 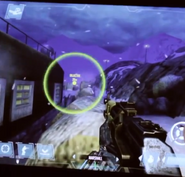 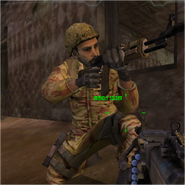 The AP-96 in third person.
Add a photo to this gallery

The AN94 returns in Call of Duty Online.

The AN94 in first person.

Another view of the AN94's menu icon.
Add a photo to this gallery

"Full-auto assault rifle. The first 2 rounds of each burst are fired at a faster rate."
— Description

The KVK 99m in first person

Cocking the KVK 99m
Add a photo to this gallery

The AN-94 was added to Call of Duty: Black Ops 4 as part of the Operation Dark Divide, now bearing its original name while using a slightly modified version of the Black Ops III design. It can be obtained through Reserve Cases.

The AN-94 can be obtained from the Mystery Box for 950 points on all maps. When upgraded via the Pack-a-Punch Machine, it becomes the Nightmare Awakened 49, gaining an increased base magazine size of 50, increased maximum reserve ammo of 450, and increased damage.

The AN-94 was added to Blackout, and can be acquired from a Blackjack Stash in limited time modes after the player acquires it from Reserves. It uses 5.56mm ammunition.

"Fully automatic assault rifle. The first 3 round burst are fired at a higher accuracy."
— Description

The AN-94 was revealed in the Season 5 trailer of Call of Duty: Modern Warfare, and is set to be released in the Battle Pass of Season 5

Retrieved from "https://callofduty.fandom.com/wiki/AN-94?oldid=2514096"
Community content is available under CC-BY-SA unless otherwise noted.