For a list of other laser sights, see Laser.

In Call of Duty 4: Modern Warfare, the AN/PEQ-2A is used exclusively during the single-player campaign. It is mounted on all M4A1s, regardless of whether the player has night vision goggles.

It may be noted as a flaw on Infinity Ward's part that the beam itself is emitted from the muzzle of the weapon on the M4A1 Grenadier and the M4A1 SOPMOD, instead of one of the device's lenses.

The AN/PEQ-2A laser mounted on the M4A1 Grenadier

The AN/PEQ-2A laser mounted on the M4A1 SOPMOD 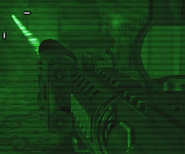 In Call of Duty: Modern Warfare 2, the AN/PEQ-2A is used in "Exodus" to mark targets for the Stryker. It is also usable on the M4A1 in "The Gulag" and the ACR in "Just Like Old Times" when Night Vision Goggles are used. It is also attached to all weapons available to the player on the ground in "Overwatch". It is also seen being used by Shadow Company. The AN/PEQ-2 can be seen attached above the Intervention's barrel, although it is only for cosmetic purposes, and is removed when the weapon is equipped with an ACOG Scope.

The laser emitted from a SCAR-H in "Overwatch"

The AN/PEQ-2 seen on the Intervention

The AN/PEQ-2A is attached to the M4A1s used by Sandman and Derek "Frost" Westbrook.

The AN/PEQ-2A is available in the mission "Stronghold" equipped on the starting MP5. It is also present on various weapons in Special Ops. Also, when enabling Console commands (only on PC), it is possible to activate laser both in Singleplayer and Multiplayer. On Akimbo weapons, there will be two laser beams. It also appears in the special ops mission "Iron Clad" on solo, to mark targets for the tank.

The AN/PEQ-2A is seen in the level "Clockwork", where many of the Ghosts have it attached to their weapons. The player, however, does not have it.