The AP-3X is a scorestreak featured in Call of Duty: Infinite Warfare. It is unlocked at level 30 and requires a streak of 1550 points to earn as the highest value scorestreak in the game.

It is a remote-controlled flying drone equipped with two automatic ballistic guns that fire bullets and two rocket turrets that launch a barrage of rockets at the player's will. The AP-3X can operate within all three dimensions, able to float upwards or sink downwards. The AP-3X is active for 60 seconds.

When using the AP-3X, the drone is instantly spawned in front of the player and can be moved around the set playing field. The view of the AP-3X drone encompasses its own GUI. Enemies in the view of the AP-3X will be highlighted inside a red square with a white cross over their model.

First Person view of the AP-3X. 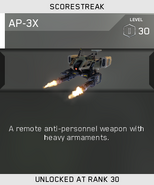 The AP-3X being unlocked in Multiplayer.