The ARX-160 appears in Call of Duty: Modern Warfare: Mobilized as one of the six assault rifles available in game. It is found used by Insurgency forces in all of the SAS missions after "Hostile Territory". Like all other ballistic weapons in game (aside from sniper rifles), the ARX-160 has no recoil. Though this may not seem unique, it also has a moderately high rate of fire, a quick reload, and decent hip-fire accuracy when moving. It also has a very accurate set of iron sights, better than some optical sights. Combined, these features make it an excellent weapon at medium to long ranges. Ammunition for it will not be a big issue either, as it is used frequently by Insurgents.

The ARX-160 is available at the start for the Insurgency faction. Similar to its single player counterpart, it retains its zero recoil, moderately high rate of fire, swift reload, accurate iron sights, and decent hip-fire accuracy. Though its damage has been reduced, the aforementioned traits still allow it to be a deadly weapon at long ranges. However, the player should stay away from close quarter engagements as it is one of the least effective weapons at close range. Despite this, the player can still use it at close ranges by aiming for the upper body, preferably the head, to compensate for its moderate damage.

Aside from close quarter problems, another issue the player will encounter while using this weapon is ammunition. Unlike in single player, the player cannot pick up ammunition for this weapon from other users. Even if they could, ammo would still be scarce as this weapon sees little use, as all weapons (aside from shotguns) have zero recoil, making them more useful. This means that the player will have to conserve ammunition by firing in burst or aiming for vital kill points, like the head. The player can also use their sidearm at close range as well, though it is less effective than using the ARX-160 itself.

The ARX-160's iron sights.
Add a photo to this gallery

The ARX-160 is featured in Call of Duty: Ghosts. It has a built-in Laser Sight.

The ARX-160 appears in the mission "Loki", used by both Icarus and the Federation, and is always fitted with an ACOG Scope and a Grenade Launcher (though it is not equipped with a Laser Sight, unlike in multiplayer). It has a high amount of reserve ammunition compared to other assault rifles in the game, and fires in two-round bursts instead of the fully-automatic mode seen in multiplayer. However, during the breaching part at the end, it is used in semi-automatic mode (Sgt. Thompson is seen switching the fire selector). It also has a slightly different reloading animation from the ARX-160 in other game modes, as the playable character throws the new magazine up and catches it before inserting it.

The ARX-160 costs the most of any weapon to purchase, at 10 Squad Points.

The ARX-160 has a low three-shot kill range compared to most of the other assault rifles and its minimum damage becomes a class worst six-shot kill. This makes the weapon much more suited for close range. Long range engagements are this weapon's weakest strength and should be avoided if possible. On the flip side, the ARX has a high rate of fire, only surpassed by the FAD, at 857 RPM. This makes it a fairly forgiving weapon up close, combined with the good effective range.

The accuracy of the ARX-160 is somewhat bizarre as well. The recoil is heavy, but the first two shots fired have noticeably reduced recoil, making burst firing very rewarding. The iron sights are passable, but will not be in the taste of some players.

Handling traits of the ARX-160 are superior compared to its peers. Its time to aim down sights is regular, but its Laser Sight boosts its hip-fire performance to somewhere between an assault rifle's and submachine gun's default, making it even better suited for close range. As well, reloads are average at around 2.87 seconds for a full reload. However, the weapons high rate of fire and 30-round magazine make reloads painfully frequent.

The usual assortment of attachments are available for this weapon. To bolster performance, the Muzzle Brake and the Foregrip are extremely popular to alleviate two major weaknesses: range, and recoil. Boosting effective range, and lowering the heavy recoil, will significantly boost this weapon's effective stats. Due to the lower recoil burst, the Burst Fire and Semi-Automatic attachments prove to be somewhat effective, as they boost the damage multipliers, making it marginally easier to compete over the longer sidelines.

With the ARX-160's great close range performance, classes should be centralized around this strength. Mobility perks such as Stalker and Agility allow the user to be quicker at all times, making them harder to hit in a gunfight should they strafe.

The ARX-160 appears in the Extinction maps Nightfall and Mayday. In Nightfall, it is located on the catwalk near where the first intel about Archer is, in the compound. In Mayday, it is behind the sealed door above the second hive in the entrance area. It has one of the lowest ammo capacities in Extinction mode, so it is recommended to get something else rather than it.

In Safeguard, it can be obtained from a Supply Drop crate. It comes with a VMR Sight and Flash Suppressor. It has a faster reload compared to the AK-12, but still less ammo in the magazine and less reserve ammo than the submachine guns in the game mode. 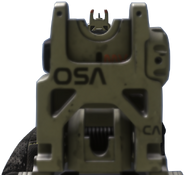 ARX-160 with an ACOG Scope equipped, used by Federation astronaut.

Concept art of the ARX-160. Note that the ACOG scope's model was different from the final version.
Add a photo to this gallery

The ARX-160 is commonly used by the Korean People's Army and the KVA in the PC and next-gen versions of the game, whereas in the Xbox 360 and PS3 versions the weapon is only found at some spots in some missions.

The ARX-160 is a standard burst-fire assault rifle with medium to high damage and very low vertical recoil. The gun fires in three round bursts making it excel at longer ranges but is not too effective in close quarters unless all shots hit. The unique variants with damage bonuses can extend the three shot kill range and increase its long range damage, further augmenting its long range ability.

The irons sights are relatively clear, however using an optic is recommended for using the gun at longer ranges for a clearer view on target. Shorter range optics, such as the Red Dot Sight and Target Enhancer will help the weapon in mid-range combat. The longer range ACOG Scope can also be a benefit to the gun for longer range firefights, as can the Auto Focus Sight. The Hybrid Optic can be utilised for a good medium between these two ranges.

The weapon has poor handling for an Assault Rifle, however the hip-fire is on par with the others in the class, meaning it is still nothing special. It is not one of the Assault Rifles' strong suits, and even less so due to the burst fire fashion of the ARX-160 making the Laser Sight an optional choice if used in close quarters often, but does not play to the weapons strengths.

Reload times are manageable and the rate of fire is low enough that Dual Mags and Extended Mags are not a necessity. Extended mags can come in handy as a burst fire weapon can eat through ammo faster than a conventional weapon due to each trigger pull taking up three shots as opposed to one. Dual Mags are also optional as reload speed should not hinder the player too much, however may prove a great asset if needing to reload during a firefight, which may be common if enough shots are missed, as each trigger pull will cause the player to lose three bullets as opposed to one.

The ARX-160 has some good variants to offer. the Hole Puncher and the Steel Bite will both make the medium range damage 35 and the minimum damage 25. This, in turn, makes the ARX-160 a one burst kill out to an outstanding 51 meters, and makes the ARX-160 one of the most lethal weapons in Core game modes. As well, the Steel Bite offers high penetration power, akin to the LMG's and the conventional Sniper Rifles. The Hole Puncher will increase recoil by 10%, and increases hipfire spread by 10%, both of which are minor penalties. However, the Steel Bite has a much heavier toll, having 20% increased recoil and a reduced rate of fire, going down to 857 RPM per burst and 580 RPM overall. The Hole Puncher is a better choice due to being more accurate and firing faster. The Hole Puncher makes the ARX-160 a very powerful weapon, requiring significantly less bullets to kill an enemy, and giving the ARX-160 one of the fastest time-to-kill ratios in the game with maximum/minimum damage, slightly behind the MK14, the ASM1, and the Ameli Subverter. However, the MK14 and the Ameli Subverter must use multipliers to get their respective two hit kills.

The Spoliator is a great variant to use in Hardcore, as it reduces viewkick by 10% and increases the fire rate in the burst to 1000 RPM, and makes the fire rate 642 RPM overall. However, this has a heavy downside of becoming 19 damage at a distance, or a six shot kill. While this is not noticeable in Hardcore, in Core, the long range time-to-kill will be much longer, as two whole bursts will be needed, instead of 1.6 bursts. In Hardcore, this damage decrease doesn't have an effect on the time-to-kill whatsoever. The Spoliator also has an Aim-down-sight speed reduction, going from 250 milliseconds to 275 milliseconds. This isn't very noticeable, and almost undetectable if using the Quickdraw Grip.

As of the most recent patches, the ARX-160 is unable to progress in the optics challenges, headshot challenges, and hipfire challenges, meaning only Grenade Launcher, Extended Mags, Foregrip, Suppressor, and Parabolic Microphone can be earned.

The ARX-160 appears in Exo Survival. It costs 2 upgrade points, and is unlocked at round 8.

Due to its burst-fire fire mode, it can waste a lot of ammo if the player does not use it correctly. On the other hand, it has very low recoil, making it a good weapon for taking down enemies at long ranges, as well as a pretty fast reload speed. Due to its burst-fire mode it may be better to stick to using it at longer ranges, although because of its fast reload it may be a good weapon to keep as a backup if the player runs out of ammo with their other weapon or runs out of ammo in the magazine of that other weapon.

The ARX-160 appears in Exo Zombies on the map Outbreak. It is available as a wall weapon a floor above the Exo Station room, for 1,250 credits. It holds 30 rounds per magazine, and has a reserve capacity of 200 rounds.

Similar to Multiplayer, it is a three-round burst weapon. Due to its burst nature, it can deal respectable headshot damage until around round 15, where it starts to lose its effectiveness rather quickly. Ammunition can be purchased from off the wall, and may be a common occurance to do so, as the ARX-160 comes with 180 bullets to fire, alongside its low damage, which further encourages players to shoot more bullets.

An upgraded ARX-160 is a very good off-wall weapon: it is able to deal high damage per bullet, and the reload time is rather short. In addition, it is located in the Exo Testing room, which is one of the largest rooms of the map, where players may stay and buy ammo when necessary. 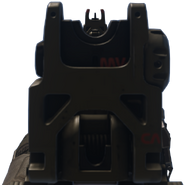 Retrieved from "https://callofduty.fandom.com/wiki/ARX-160?oldid=2213860"
Community content is available under CC-BY-SA unless otherwise noted.