The AS50 is featured in Special Ops and Multiplayer, but is absent from the Campaign.

The AS50 is available for both Survival and Mission modes.

Several AS50s can be found at the infil point in the Mission Mode challenge Smack Town. They come with 10 round magazines, instead of the 5 round magazines from Survival Mode and multiplayer, and have 100 reserve ammunition each.

The AS50 is unlocked at level 22 in Call of Duty: Modern Warfare 3's multiplayer. The AS50 has low recoil, high power (a one-shot kill to the head, neck, chest, and stomach areas), and a five-round magazine. The AS50 has a unique scope with 2.4x zoom, lower than other snipers' default 4.8x zoom making the rifle more suitable for use at closer ranges than other sniper rifles. With this lower zoom, the sway is less noticeable as well. However, the lower zoom means that it is less useful at longer ranges.

The Variable Zoom can be very useful on the AS50, as the scope retains the close range zoom, but can be zoomed in for taking out players at longer ranges that the default scope would otherwise have trouble hitting. Extended Magazines is another good option, as it will assist in prolonged engagements that otherwise would require constant reloading. On the other hand, the Silencer is not recommended as it severely decreases the chances of a one-shot kill, which is one of this rifle's key advantages. Attachments will let the player combine attachments to lend to the strengths of shorter range combat that comes with the default scope zoom. Stability is equally effective, as it will lower the sway of the scope. It would, however, be worth mentioning that the AS50's default sway is actually lower than that of all other sniper rifles; this is not merely an effect of the lower zoom.

It should also be worth noting that the AS50 has a significantly lower rate of fire compared to other semi-automatic snipers (about a 1000 max RoF difference), making it extremely ineffective at close quarters compared to other snipers, which can continuously fire for a better chance of getting hits. Using a sidearm is next to mandatory for such instances.

First-person view of the AS50

Reticle of the scope

A sniper wielding the AS50 on the map Liberation 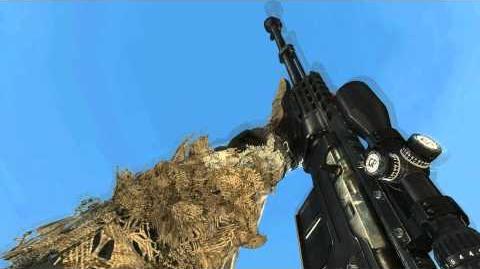 The AS50 returns in Call of Duty Online as the Arctic .50 BMG.

The Arctic .50 BMG in first person

The Arctic .50 fitted with a suppressor 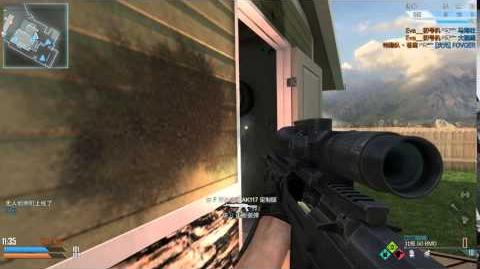 It is a well-rounded semi-automatic sniper rifle that rivals bolt-action ones by having a good fire rate, good range and one-hit kill zone from above the chest. From Season 9: Conquest, it receives Stopping Power rounds, which allows it to one-hit enemies even when shot at the foot. However, this costs the Arctic .50 its ADS speed and mobility.

The Arctic .50 is available in Battle Royale mode. It is a semi-automatic sniper rifle with high damage and good ADS spread at range. It is available as Uncommon and Epic blueprints.

A more powerful Mythic variant (formerly Legendary) can be found in Airdrops, or very rarely spawn on the ground. It was previously referred to as "Arctic .50 (Exotic)" in the HUD, but is now simply called "Arctic .50" since Season 9. It comes pre-equipped with a Thermal Scope, which highlights all enemies in orange when ADS'ing. It also has increased damage per shot. In addition to the thermal scope, it is fitted with the following attachments: Stippled Grip Tape, Anti-Material Heavy barrel, RTC Steady Stock and 10 Round Reload.

A Legendary variant called the Anti-Tank Sniper can be found in the Tank Battle game type of Battle Royale introduced in 2021's Season 2: Day of Reckoning.

The Exotic variant in Battle Royale

Aiming the Exotic Arctic .50; note the enemy being highlighted