The ASP is the first weapon the player uses in the game. It appears as a secondary weapon in the mission "Operation 40", along with the M16. The ASP is the weapon used to shoot Castro's Double; if the player has swapped the ASP for another weapon, Mason will receive another one to shoot him. This is the only mission in which the ASP is available.

The ASP is unlocked by default.

The ASP is an anomaly of the pistols in the rate of fire department. Despite being semi-automatic, the ASP can be fired as fast as 937 RPM, or as fast as the FAMAS, AUG, and the majority of SMG's. This rate of fire makes the ASP one of the deadliest pistols in close quarters, as it fire more than 30% as quickly as the other pistols singularly.

The ASP is very odd on the accuracy front. The iron sights are of a bizarre guttersnipe shape, with no front sight to speak of. The recoil per shot is very low, but the centerspeed is only 1100, making it so recoil can be accumulated and get out of control if firing quickly. Proper trigger discipline will vastly increase the ASP's accuracy.

The ASP has phenomenal handling traits. The ASP can be raised and lowered exceptionally quickly, the hip-fire spread is a decent size, the player will aim down the sight in 125 milliseconds, the player will move at 100% of the base speed, and the player reloads very quickly, taking less than a second to reload regularly. With Sleight of Hand equipped, this reload becomes very fast, taking less than half a second. This makes it so the ASP can somewhat sustain focused fire, as reloads are nigh painless. As well, the ASP is very reliable as a sidearm due to its fast switch speeds, making it so the ASP can be switched to, and ready to fire, in half a second's worth of time. Due to the ASP's favorable handling traits, the ASP is one of the best pistols to use for snipers, as snipers can find themselves a way to survive close quarters engagements by simply switching to the ASP. If need be, the ASP can also be used for a long period of time, as reloading is painless, and the player can move quickly with the pistol, sometimes allowing players to strafe around heavy weapons users with the greatest of ease.

The ASP's most crippling weakness is its magazine capacity. The ASP will only hold seven rounds by default, and the ASP lacks the Extended Mags attachment, giving the ASP quite limited in firepower due to the short-lived time a player can sustain fire before reloading. As well, the ASP only holds a total of 28 rounds when spawning unless Scavenger Pro is in use. As well, the ASP is a rare sight on the field, so players are commonly left unable to scavenge ammunition off the ground without the Scavenger perk.

The ASP only has access to one attachment: Dual Wield. Dual Wield restricts the ability to aim down the sight, and instead, allows the player to hip-fire two ASP's at once. The attachment is worth consideration, as the player has 14 rounds in total between both pistols before needing to reload, and the ASP's rate of fire can be put to great use with the Dual Wield ASP's, as each pistol fires at a monstrous 937 RPM, making it so the total rate of fire is effectively 1874 RPM, the fastest rate of fire possible for a pistol. However, such attachment has further strength, as the switch speeds are reduced, making it so the ASP's can be switched to more quickly than a regular ASP. This can make the Dual Wield ASP's a gift of a weapon to heavy weapons users, who may otherwise find themselves doomed as their sluggish weapon cannot kill swifter opponents in time. 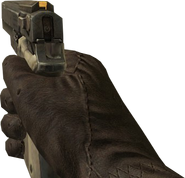 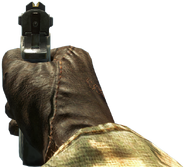 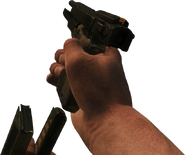 Diving with the ASP

Side view of the ASP

Third person view of the ASP

Render of the ASP

An early version of the ASP; note the whiter coloration of the grip