The AT4 is seen strapped to the backs of some USMC members, but is only usable with cheats. The only times it is seen being used are in "Shock and Awe" and "Game Over". It is seen in Shock And Awe when a soldier pulls it out and fires it at a cluster of buildings. Additionally, when the player reaches the top of the under-construction building, one of the besieged troops will fire it into a crowd of troops right before the player gets to the top. In Game Over, it is seen used by SAS members attempting to shoot down a pursuing Mi-24 Hind; during the mission, it sounds like a Stinger when fired, and additionally fires the same missile as the Stinger, and is additionally named "Stinger" in-game.

The AT4 can be used on the levels "Shock and Awe" and "Game Over" by using the "give all" or "give at4" console command. The weapon, which is normally dropped by NPC's after firing, has no reloading animation. So when it is fired by using the cheat, it is just suddenly reloaded and ready to fire again, similarly to the Javelin.

In multiplayer, the AT4 was originally supposed to be given to the player as a first tier perk. The perk's icon still remains in the game files, along with a kill picture which was used in Call of Duty: Modern Warfare 2. It was probably replaced by the RPG x2 perk.

An AT4 "unlockable" with the cheat code on PC

The AT4 slung across a Marine's back

Another image of an AT4 carried by a Marine

The AT4 being fired

The AT4 debuts as a usable weapon in Call of Duty: Modern Warfare 2. This version is called the AT4-HS (Heat-Seeking Launcher) as it is capable of locking on to aircraft. To lock-on, the weapon must be ADS aimed at an aircraft until a clear, loud tone is heard and then fired.

The AT4 can be seen and used during "Team Player", "The Only Easy Day... Was Yesterday", "Of Their Own Accord", and "Just Like Old Times". It is referred to in the pickup prompt as simply "AT4," and is only capable of free-fire in the Campaign mode. In "Team Player" it is used by one of the Rangers protecting the Bridgelayer and firing back at the RPG teams on other side of the river; if killed, he'll drop it and can be picked up before boarding the Humvee. In "The Only Easy Day... Was Yesterday", the AT4 can be found before the player breaches the second room, and also inside the second breach point itself. A third AT4 can be found in the hallway near where the helicopter attacks the team. In "Of Their Own Accord", it can be found on a table next to the pile of bodies near to the entrance of the bunker the player spawns in. In "Just Like Old Times," the AT4 can be found in a few places such as outside the explosive-rigged control room and in the yard before the boat chase.

The AT4-HS is the first rocket launcher to be unlocked, at level four, and is also part of one of the default classes. Unlike in the campaign, the player does not discard the apparatus after firing the rocket. It is capable of both free-fire and lock-on, although it does not do as much damage as the Stinger or Javelin to any aircraft. It does the same amount of damage as the RPG-7 against infantry, although with a smaller blast radius and only one rocket. However, it is far more accurate, especially at range, and can be lock-on fired. Like the others, however, the player must be aiming down the sights in order to fire.

AT4's can be useful in taking down helicopters with flares so long as the player has Scavenger. The player simply has to fire an unguided rocket at a helicopter without locking on, which means there are no deployed flares. However, this can be difficult at firing at far or small targets such as an Attack Helicopter or an AC130 but is very effective against a Harrier Strike, Pave Low, or a Chopper Gunner.

The AT4, alongside the RPG-7, does a very specific amount of damage against Harriers; the aircraft's max health (3000) minus 900. This is not enough to kill the Harrier outright, but it allows for a short burst of automatic fire afterwards from an LMG or Assault Rifle to easily destroy the Harrier.

The AT4 in first person

The AT4 in third person

Pickup icon of the AT4 is seen during E3 gameplay video, but it is later cut and most likely replaced by SMAW. Also, menu icon and textures can be found in game files. However, a Stinger with an AT4 skin can be seen in the campaign mission "Persona Non Grata".

The AT4's pickup icon in the E3 gameplay video

The AT4 appears in Call of Duty Online as the SMRS.

The SMRS in first person

The AT4 appears in Call of Duty: Heroes as the AT4 Launcher. It is used by Ghost as a Hero Skill. It has a performing range of 25 tiles, deals 500 damage, and has an effect range of 1.

Multiplayer:
1+1 (If equipped with Launcher Plus)
Battle Royale:
1+38

"Disposable rocket launcher that fires without the need to lock onto targets."
— Description

The AT4 returns in Call of Duty: Mobile as the SMRS.

The SMRS can deal fatal damage, however its splash radius was decreased, so the shot will have to land close (or directly on) to enemies in order to score a kill. It can deal heavy damage to scorestreaks, however its damage output to scorestreaks is not enough to make the weapon reliable.

The SMRS does not have the ability to lock onto targets, which makes guiding shots horrendously hard. It also deals less damage to vehicles, requiring more shots to destroy them than that of the FHJ-18. This makes the SMRS in BR only good for taking out player targets at closer ranges. The SMRS can be found in launcher boxes as Common blueprints. 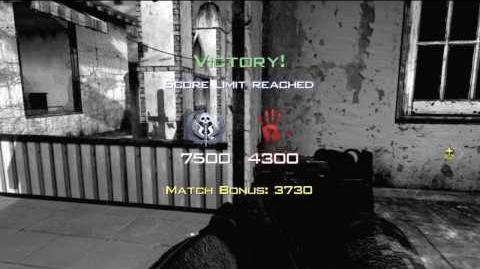 Modern Warfare 2 - Headshot AT-4 Game Winning Kill
Video showing the accuracy of the AT4; it is accurate enough to get a headshot at medium ranges
Deutsch Español Русский
Community content is available under CC-BY-SA unless otherwise noted.
Advertisement