For other variants, see AUG HBAR and AUG A3.

The AUG is the default weapon used by Hudson and all the members of the CIA in "WMD", equipped with a Suppressor, a Swarovski Scope, and a unique Yukon camouflage.  A single AUG, identical to those carried by the team but lacks a suppressor, can be found lying on the ground in the room after the first window breach. It is the signature weapon of Grigori Weaver.

The AUG is the 6th Assault Rifle unlocked, at level 26.

Compared to other weapons in its category, the AUG has a low damage-per-shot, as its damage dropoff comes earlier than other assault rifles, and that headshots will not change the time to kill at close range. However, this low damage-per-shot is remedied by a powerful rate of fire, at 937 RPM. This combination; however, can make it easy to waste ammunition, causing frequent reloads and shortages.

To eliminate the aforementioned weaknesses, Scavenger Pro and Sleight of Hand will allow the user to worry much less about its key weaknesses.

As far as accuracy is concerned, the user will have to be very accurate to use it well. The recoil kicks the sights left, right, and up, making recoil correction more difficult than it is compared to its competitor, the FAMAS. At longer ranges, it is almost a necessity to burst fire, as the recoil is large enough to throw many players off their aim during sustained fire.

The iron sights on this weapon are very clear, sharing the leaf sights with the FAMAS, Enfield, Commando and G11. However, the AUG's front post is larger, which can make the handling of the weapon fluctuate due to the larger sight.

The AUG gets the usual assortment of attachment options. Magazine modifications are very good for this weapon if more sustained fire is desired. As well, the Suppressor turns the AUG into a deadly stealth weapon capable of delivering large amounts of silenced fire, while its adverse affect is minimal due to the minor difference between the maximum and minimum damage.

If desired, optical attachments are there as well; however, the AUG gets a unique ACOG Scope in the form of the Swarovski Scope, which has a small circle with a dot in it indicating where the player shoots. It is very clear compared to the American and Soviet ACOG Scopes; however, the moderately large recoil of the AUG is increased, which can bring a major hindrance into play when using it, as burst firing will be a common sight to simply keep the dot on target.

All of the underbarrel attachments are there, too. The Masterkey and Flamethrower have minimal effect on the AUG, due to its already stellar close-range capabilities. However, the Grenade Launcher can provide a useful use in flushing out certain interior areas, or even keeping objective points a dangerous spot.

The AUG is most commonly compared to the FAMAS, due to their similar iron sights, rates of fire, and damage profiles. Before a patch, the FAMAS was superior in many aspects compared to the AUG. However, a patch severely reduced the handling of the FAMAS, giving it more recoil, a longer ADS time, and a larger hip-fire spread. As far as handling is concerned now, the AUG is superior in nearly every aspect, except for the fact that the FAMAS is unlocked 12 levels earlier.

In conclusion, the AUG is commonly seen online due to its many key aspects, as the skilled player can easily pin down opponents with a massive amount of bullets and cause a lot of trouble for the opposing team due to this. As such, it is commonly used by casual and pro players alike, due to its defining aspects. However, the FAMAS remains equally popular even with the numerous handling issues (due to the faster unlock time and smaller iron sights), which can cause the AUG to receive less use than its counterpart, especially with the lower-leveled players.

This weapon is available in all Zombies maps (except Dead Ops Arcade). It is only available via the Mystery Box. It always appears with the Swarovski Scope attachment. In the Wii edition, it can be found in Kino der Toten in the Theater Room under the auto turret, for 1200 points. The AUG has decent damage, a fast rate of fire, and a significant ammo reserve, making it an effective gun until around round 20 if aiming for headshots. The Swarovski Scope is a double-edged sword; on the one hand, it provides a clearer view on target and allows for easier headshots; however, it also increases the ADS time and recoil, making hipfiring advisable in close-quarters. Speed Cola is highly recommended, as the fast rate of fire will burn through a magazine very quickly. Combined with Double Tap Root Beer, the already high rate of fire means that the gun can run out of ammo very quickly if not carefully conserved. Deadshot Daiquiri can be very useful on the maps Call of the Dead, Shangri-La, and Moon, combining with the scope to create a potent weapon for headshots. On iOS the scope on the AUG is not functional

When Pack-A-Punched the AUG becomes the "AUG-5OM3", (a combination of 'AUG' and 'Awesome', in leet speak). Pack-A-Punching it will increase the damage, ammo reserve, and add a powerful Masterkey underbarrel shotgun. The Masterkey comes with 36 rounds and can kill Hellhounds with one shot up to at least round 25. Note that the Masterkey itself is not Pack-A-Punched and when firing the muzzle flash will be violet and exit from the AUG barrel. The AUG-50M3's combination of good damage and a high rate of fire give it the highest damage per second of any Pack-A-Punched Assault Rifle, LMG or SMG, making it effective both at killing zombies and scoring points, even into the later rounds (although consequently it will run out of ammunition faster than the LMGs or some Assault Rifles). The AUG's decent ammo capacity, power, and headshot capability make it a worthy gun to Pack-A-Punch. Running out of ammo on either version is not a worry on the Wii, as it is available from the wall and from the box alike, a massive advantage over all the other versions.

First person view of the AUG.

Diving with the AUG.

The AUG being cocked while rappeling in "WMD"

Render of the AUG

The purchase point for the AUG in the Wii version of Kino der Toten.

Weaver with his AUG. Note that it lacks a foregrip.

The "AUG-5OM3" when switching to the Masterkey.

The AUG in Call of Duty: Black Ops Zombies.

The Old Swarovski Scope on the AUG before the game was released. This version had four black lines leading up to the hollow center point.

The AUG with a cut Bayonet and a Masterkey in Zombies.

A close-up of the cut Bayonet on the AUG.
Add a photo to this gallery 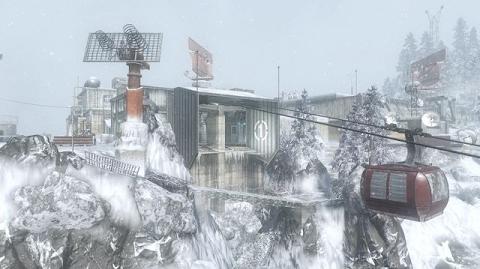 A Shadow Company soldier carries an AUG before being knifed by John "Soap" MacTavish.

The AUG appears Call of Duty: Modern Warfare as a submachine gun.

Retrieved from "https://callofduty.fandom.com/wiki/AUG?oldid=2510226"
Community content is available under CC-BY-SA unless otherwise noted.