For the assault rifle variants, see AUG and AUG A3.
For a weapon with a similar name, see HBRa3.

Moderate (without grip), Low (with grip)

The AUG HBAR can often be found throughout the campaign, most often dropped by Ultranationalists or found in their various armories (such as in "The Gulag"). The weapon always comes with optics in the campaign, be it the Swarovski Scope or a Red Dot Sight.

The Swarovski scope uses the standard sniper scope reticle but has far less zoom than that of a sniper rifle, instead having the magnification level of an ACOG Scope.

In Multiplayer, the AUG HBAR is unlocked at Level 32.

The AUG HBAR is a high damage LMG. The AUG HBAR deals forty damage at all distances, scoring a three hit kill, or a two hit kill if a headshot is scored. The AUG HBAR also has high penetration power. In tandem with its high damage, the AUG HBAR is perfect for spraying through walls, although its shorter magazine may disappoint in this regard. With Stopping Power equipped, the AUG HBAR deals 56 damage at all distances, scoring a two hit kill, and deals a 78 damage per headshot. With a Silencer equipped, the AUG HBAR deals 42 damage per bullet for a three hit kill, or two hits if a headshot is scored. Getting two shot kills through cover with a silencer is tricky, since a headshot and body shot does exactly 100 damage, so the cover has to be very thin, or two head shots must be scored. Without a silencer, two shot kills through cover is not difficult.

The AUG HBAR's fire rate is the slowest in class, firing at 689 RPM. This fire rate helps to prolong the short magazine (short compared to the LMGs) and dampen recoil. Overall, this slow fire rate makes the AUG HBAR among the least reliable LMGs in close quarters.

The AUG HBAR's accuracy is moderate. The iron sights are very clean, with little obstruction thanks to the lack of a back sight. The recoil per shot is somewhat low, with the AUG HBAR having some of the lowest recoil values in the LMG category, but the AUG HBAR has a reduced centerspeed compared to other LMGs, with only 1500 centerspeed, whereas all other LMGs have 1700 centerspeed. This makes the AUG HBAR recover from recoil much slower than the others, though this is mitigated somewhat by the low rate of fire.

The AUG HBAR's handling characteristics are superb for an LMG. The AUG HBAR has the fastest switch speeds of all the LMGs, and the AUG HBAR has the fastest reloads of all LMGs too, taking 3.36 seconds to do a partial reload, or 4 seconds to reload if the magazine was completely empty. In either case, the player can Reload Cancel after just 2.4 seconds. This speed is 600 milliseconds faster than the next fastest LMG, the L86 LSW. All other LMGs take at least five seconds to reload cancel. The AUG HBAR has typical LMG stats in all other aspects: it moves at a slow 87.5% movement speed, aims down the sight in a sluggish 350 milliseconds, and has poor hip-fire performance.

The AUG HBAR has an extremely small magazine capacity for an LMG, holding just 42 rounds per magazine, less than half of what all other LMGs have. However, the AUG HBAR gets an extra magazine on spawn than the other LMGs, allowing the AUG HBAR user to spawn in with 126 rounds to start, 42 being in the magazine and 84 in reserve.

The Red Dot Sight and Holographic Sight replace the iron sights with the respective sight picture. The iron sights are extremely simple and un-obstructive, so the benefits of these attachments' effects aren't clear-cut.

The ACOG Scope is a bad fit on the AUG HBAR. The center speed is lowered to a paltry 1100, among the lowest of all fully automatic weapons in the game. It also makes the AUG HBAR take longer to aim, requiring 400 milliseconds to aim instead of 350 milliseconds. Overall, this attachment forces players to tap fire at a distance to remain accurate, and compounds the AUG HBAR's accuracy weakness. Nonetheless, the zoom advantage it provides can come in useful to make enemies easier to see.

The Thermal Scope is similar to the ACOG Scope. The Thermal scope provides an even larger zoom level, while highlighting enemies -without Cold-Blooded bright white. Unlike other LMGs, the AUG HBAR does not receive a center speed reduction when using the Thermal Scope, but still experiences the same increase in idle sway the other LMGs experience. The Thermal Scope's attributes make it valuable in hardcore game types, where the scope can be steadied to make the first shot perfectly accurate.

FMJ increases the AUG HBAR's ability to shoot through cover. With already high penetration power, the value of this attachment is questionable and potentially overkill, but with FMJ and Stopping Power, only the thickest of obstacles can block the AUG HBAR's onslaught.

Extended Mags boosts the AUG HBAR's magazine capacity to 63 rounds, bringing it closer in line with the other LMGs, and splitting the starting ammo pool across two magazines instead of three. This attachment solves one of the AUG HBAR's defining weaknesses. However, due to the AUG HBAR's very fast reload speed for an LMG, the 42 round magazine is usually sufficient.

AUG HBAR without any attachments

AUG HBAR with a Swarovski Scope, only available in the campaign

Cocking the AUG HBAR in campaign. Note the shorter barrel and the lack of a bipod and carrying handle, unlike in multiplayer.

The campaign version of the AUG HBAR in third person, with a Red Dot Sight

The AUG HBAR was going to be featured in Call of Duty: Modern Warfare 3, but was cut before the games release. Some of its files remain in the game. It was partially implemented, then scrapped during middle development. 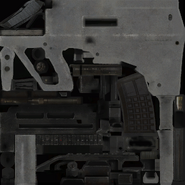 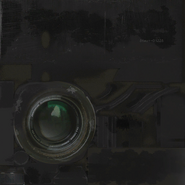 The AUG HBAR returns in Call of Duty: Online as the Steyr AUG-H.

The Steyr AUG-H in first person