For the killstreak, see Harrier Strike.

The Harrier is used by the USMC to support their amphibious landing operations. They usually carry out airstrikes against enemy fortifications and units in support of friendlies. As a VTOL aircraft, it is capable of hovering in place, much like a helicopter.

A flight of USMC AV-8B Harrier IIs appear in the mission "Heat", callsign Falcon One. They provide close air support to the SAS team using cluster bombs. Additionally the player can see USMC Harriers bombing targets in the mission "Shock and Awe" ahead of the Marine assault, thereby reducing resistance to a ground assault by the Marines. Two of the jets fly right over the player's position in the mission "Charlie Don't Surf" when they are on the roof of the TV station. Several Harriers can be seen flying on the sky in the mission "War Pig".

A Harrier delivering an airstrike in "Heat".

Close-up of the Harrier in "Charlie Don't Surf".

A close up of the Falcon One in "Heat".

The Harrier II also makes an appearance in the campaign, though they are seen far less often than in Call of Duty 4: Modern Warfare, with the F-15 Eagle replacing them in the role of close-air support. In the level "Exodus", prior to reaching the HVI's house, a pair of Harriers can be seen using their VTOL capability to take off from a driving range near the C-130 crash site.

The Harrier is also available as a killstreak in Modern Warfare 2. The first 2 Harriers drop cluster bombs while the third hovers, using it's GAU-12 rotary cannon against enemy players and missiles against helicopters.

Another view of the AV-8B.

A model of Harrier in "Museum".

Harrier used in multiplayer, liveried for the Russian Air Force.

AV-8B was cut from Call of Duty: Modern Warfare 3. Textures can be found inside game files. 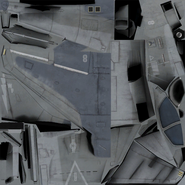 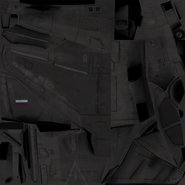 Harriers were featured in the 2013 beta of Call of Duty: Online. At present removed from the game.

Harriers returns in the game as a killstreak reward for Call of Duty: Modern Warfare as VTOL Jet. Same as it's Modern Warfare 2 counterpart the only difference is it consists of a single jet which strikes the target with a rocket barrage and circles back to hover above the target, and can be ordered to guard another location of the player's choice.