Make your way to the Fortress

A Desert Ride is the eleventh campaign mission in Call of Duty: Finest Hour.

The player starts immediately at the end of the cutscene, and must quickly dispatch the German sniper on the top of the cliff. Once this is done, the player should pick up the two health packs near the jeep, then board it immediately when Sgt. Starkey is finished fueling it. Use the machine gun to suppress the Germans advancing from the rear, and quickly swing it forward to engage a roadblock around the corner. Destroying the truck will allow Starkey to continue, entering a large open battlefield. A Stuka will approach from the front, following the road. Destroying it should be a priority, as it is capable of massive damage to the player. Starkey will pull the vehicle up to a ruined wall, and expose the player to a large amount of Germans. The best way to handle this is to shoot the barrel near the half-track to destroy it and take out any Germans near it. After most of the hostiles are gone, Starkey will continue up the road, pursuing two German trucks. After rounding a curve on a hill one will find a panzer bearing down on them just as the jeep stalls. The best course of action to eliminate the Germans and suppress the panzer until the jeep is restarted. Another truck must be destroyed to continue down the road, where another Stuka will attack the player. After this the jeep will ascend another hill, and meet a large number of Germans. They are all situated amongst a group of explosive barrels, making their elimination easy. Following this the jeep will arrive at the fortress and the player passes out, ending the level. 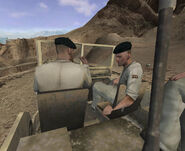 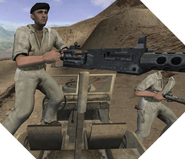 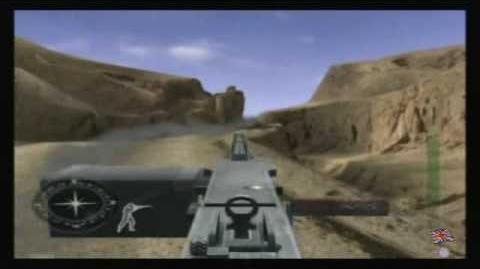 Retrieved from "https://callofduty.fandom.com/wiki/A_Desert_Ride?oldid=2548891"
Community content is available under CC-BY-SA unless otherwise noted.