"Urban warfare in the Battle of Aachen. Long range gameplay down the dangerous streets mixed with up-close engagements through war-torn structures."
— Description

Aachen is a multiplayer map in Call of Duty: WWII.

During the private beta, a Spotify barcode was added into the map[1]. Using the Spotify app, the barcode led to an audio message called "Intercept Dog"[2]. The message ended with two letters in morse code repeated five times.

"Patience is bitter but its fruit is sweet. The prosperous have broken all ties. No tiger will make it north before the leopard wakes. The spots are on the move. Your prosperous stand 30 kilometers away. All ties severed. We pray for Neptune and wait for your arrival as mother tiger sleeps. GHGHGHGHGH" 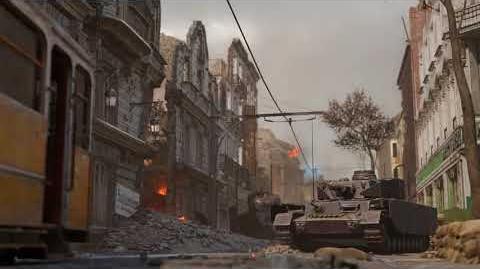 Retrieved from "https://callofduty.fandom.com/wiki/Aachen_(map)?oldid=2466314"
Community content is available under CC-BY-SA unless otherwise noted.