A.J.
The Jock
The Hip Hop Wannabe
The Sleazebag
The Rebel

Pilot (The Beast from Beyond)

"A natural born athlete with a silver tongue and Adonis-like looks. With his sporting ability at his disposal, he’s ready to knock this role out of the park, one zombie head at a time, or die trying."
— Official Zombies in Spaceland biography

Aaron I. Jordaniels (better known as A.J.) is a playable character featured in Call of Duty: Infinite Warfare's Zombies. He is voiced by Ike Barinholtz.

Aaron Jordaniels was born in Los Angeles, and is the son of two famous athletes. His mother is a retired tennis professional, while his father is a world-class surfer. With his parents' genes, A.J. proved to be an excellent athlete himself throughout his years in high school. However, rather than pursuing a career as an athlete, A.J. chose to follow the limelight, and became famous as a TV drama star, known in teen series such as "Werewolf Poets" and "High School Hunger".

After his character was killed off in "High School Hunger", A.J. sought to appear in the big screen, to prove to the world he has more than just his good looks. This allowed Willard Wyler to convince him to take part in his latest movie.

In reality, A.J..has short brown hair, wears a black jacket over a white T-shirt that has the number "88" over a red stripe on it, and blue jeans. After being sucked into Zombies in Spaceland, his hair is slightly longer, and he is now wearing a blue letterman jacket with white sleeves that reads "IW". In Rave in the Redwoods, his hair is bleached and incredibly short on the sides, and he has a slightly noticeable goatee. He is wearing a purple parka with a white shirt underneath, and purple pants. In Shaolin Shuffle, he wears a fedora with a pink feather which covers his now black hair, along with a much longer handlebar mustache and wears a blue jacket and jeans. In Attack of The Radioactive Thing, he now has a similar appearance to James Dean , as he is wearing a leather jacket over a white shirt, and once again is wearing jeans. He has slicked back black hair. In The Beast From Beyond, he is now wearing a red jumpsuit, but physically looks like he normally does. After completing the main easter egg, he is given Willard's suit. 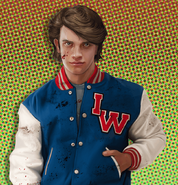 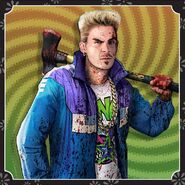 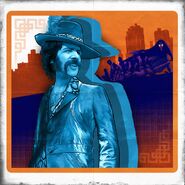 A.J. with Poindexter, Andre and Sally in Zombies in Spaceland.

A.J. concept art for Rave in the Redwoods.