Suffer With Me (in-game)
Dispatch (chronologically)

Join Menendez on stage.
Rendezvous with Menendez at the Citadel.
Clear the LZ.
Pursue and capture Menendez

"Deep cover CIA operative Farid has penetrated Menendez' inner circle and is poised to capture him during a JSOC assault on Menendez' HQ in Yemen."
— Mission description

"Achilles' Veil" is the eighth campaign mission in the Call of Duty: Black Ops II single player campaign. It involves Farid infiltrating as a Cordis Die agent and gaining Menendez's trust in order to get a chance to capture him along with support from the J-SOC.

Deep Cover CIA Operative Farid is working alongside Raul Menendez in an attempt to see what he is planning. In the start of the level, Farid is talking to Harper via internal comlink, saying to not blow his cover. Menendez is then seen next to a fire, thinking there is a traitor. He does not give it much warning, as he claims he is one step ahead of him. Farid, Menendez, and DeFalco (depending on player's actions in earlier missions) walk out on an outdoor stage with other militia members shouting, "Cordis Die!" A VTOL then comes out behind the stage, and DeFalco (or a militia member) takes it down with an FHJ-18 AA launcher. Quadrotors then come in and open fire on the militia. Menendez then tells Farid to meet him at the Citadel, and Farid has to fight his way through enemy soldiers and drones. Later, Menendez appears halfway to the Citadel, in front of a VTOL with Harper in it. He takes it down, and Harper is dragged out later. Menendez, suspecting that Harper knows the traitor, asks who it is, but doesn't answer. Menendez gives the player a Five Seven pistol, and tells him to kill him. The player can choose to either kill Harper or shoot Menendez.

If the player chooses to shoot Menendez, he avoids his attack, and kills Farid with an Executioner revolver, but Harper is spared. As Section, he orders Salazar to call for Medevac to extract Harper back to the Obama, and the player loses communication with Harper, and eliminates the militia with a VTOL's minigun.

If the player chooses to kill Harper, Harper gets shot in the head with the player's Five Seven, sparing Farid, as an allied VTOL comes up behind them and kills off the militia. Farid feels devastated since he had no choice but to kill Harper.

The player then takes control of Section and acquires Quadrotors to assist him. After the player reaches the Citadel, an allied VTOL is waiting, with Menendez captured. The level ends with the Navy SEALs securing the inside, saying that Menendez will be interrogated. 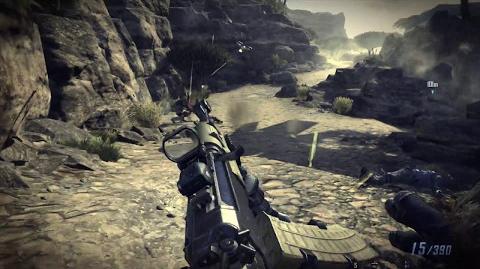 Completing 2 challenges unlocks the DSR-50 for the single player loadout.

Achille's Veil is the only level in the game whose challenges do not unlock perks.

Five Seven (used when Farid must make his choice)

FHJ-18 AA (used by Defalco or a militiaman, and by Menendez)

Pulwar Sword - After Menendez instructs Farid to go to the Citadel, go through the largest exit in the center, next to the tall sheltered houses in the second open garage to the left.

Alternate Path - Near the Citadel, there is a locked gate which can be opened, revealing an alternate path leading up to the balcony of a building. This path can be used to avoid gunfire, plus there is also a Sentry Gun which can be controlled by the player. This path is required for the "eliminate quads with turret" challenge.

Raul walking through his line of men.

Menendez at a rally.

Farid going through the market.

David arriving while taking down hostiles.

Farid being taken away.