"Blend into the environment and become nearly invisible, except to very close enemies. Sprinting and shooting will still draw attention."
— Description

Active Camo (known as Extended Camo after being upgraded) is a Martial cyber core. When upgraded, the time of use is extended.

Extended Camo is incredibly useful on higher difficulties, as enemies tend to ignore or search for the player, allowing opportunities for open assaults while being concealed. Combined with silenced weapons, this makes the core one of the easiest to use.

Notably in Sand Castle, Maretti is able to see the player if they are using camo, and can still damage them even if they're cloaked.

In multiplayer, Active Camo is a specialist ability exclusive to Spectre. Performing any attack in multiplayer while using it will immediately end the duration of the Active Camo.

This ability is very useful in Search and Destroy as well as Demolition, as the player can potentially sneak past enemies and get to key bombsites.

Active Camo in use in multiplayer.

Active Camo returns in Call of Duty: Infinite Warfare as a payload for the Phantom combat rig. It is unlocked at level 54. Much like the Call of Duty: Black Ops III version, it renders the player almost invisible, allowing the player to sneak past defended positions with ease.

The Active Camo duration was originally 10 seconds, however this was reduced to 7 seconds in the February 3rd, 2017 update[1]. 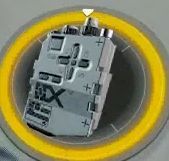