For the similar killstreak, see Blackbird.

The Advanced UAV is a fixed-wing aircraft that periodically shows the position and direction of enemies on the player's minimap with higher sweep frequency relative to the common UAV.[1] However, unlike the SR-71 Blackbird from Call of Duty: Black Ops, it can be seen and shot down. The Advanced UAV does not give real-time updates of the enemy's movements; instead, it sweeps periodically like the normal UAV. Also, players using the Assassin perk are immune to detection by the Advanced UAV. The Advanced UAV stacks with normal UAVs.[2] Like the UAV, it takes one missile to destroy the Advanced UAV, except for the SMAW. 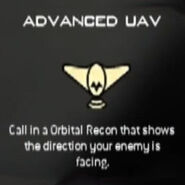 The Advanced UAV sweeping the map.

The Advanced UAV makes a return in Infinite Warfare as a Scorestreak costing 1200 points. It functions very similar to its Modern Warfare 3 counterpart, revealing the positions of all enemies, with or without the Ghost perk, as sweeping directional arrows on the minimap for the team. 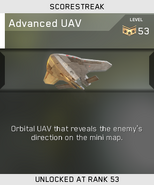 $12000 (Warzone) (Effect only occurs when 3 UAVs are activated in a short period of time of each other from the same team. Works in solos as well)

"Orbital UAV that reveals the enemy's direction on the mini-map."
— Description

The Advanced UAV returns in Call of Duty: Modern Warfare as a killstreak. It behaves similarly to its Modern Warfare 3 version, but players with the Ghost perk will be shown as red dots instead of arrows. Killstreaks will also be able to target players utilising the Cold-Blooded perk whilst the Advance UAV is active.

Due to how the Advance UAV functions, it is possible to destroy during their fly over via use of an unguided rocket, such as the PILA or Cruise Missile killstreak. [3]

Promotional artwork of the Advanced UAV

"Orbital UAV that reveals the enemy's direction on the mini-map."
— Description

The Advanced UAV returns in Call of Duty: Mobile as a scorestreak. It was added as part of the Season 11 Anniversary update.

It shows the direction of the enemy in real-time and can only be destroyed with an EMP Systems.