Aground is a DLC map for Call of Duty: Modern Warfare 3 designed to be played with the new Face Off gamemode. The map was released to everyone on Xbox 360 for free on May 16, 2012.

Set on the Irish coast, the map features treacherous cliff faces, networks of caves and the rusted and ruined remains of a grounded transport ship.

Aground is made mostly of long lines of sights and points of cover which proves effective for snipers and long range combat. At each end of the map, there are close-combat spots which offers a contrast in types of fighting. The map also has a few shady areas allowing players to hide within during intense combat. Overall the map is one based on forward moving fighting, with the majority of fighting taking place at both ends of the map. 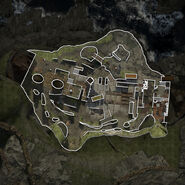