For other uses, see Airfield.

"Airfield Ambush" is the last campaign mission of Call of Duty: Finest Hour's Russian Campaign. After infiltrating the Luftwaffe base outside of Stalingrad, Nikolai Badanov resumes his attack on the base.

The player starts out in the warehouse from the end of "Operation Little Saturn". Follow column of T-34s out of it. Be sure to destroy the guard tower, as the Panzerschrecks can be a nuisance. Fight through the Train Station and destroy the three Panzers. Proceed to the hangers, and beware of a Panzer in the hanger to the right. Destroy the planes, oddly, the machine gun does better than the cannon to destroy them. Don't forget the ones inside hangars, and watch for another Panzer that spawns to the behind. After all the planes are gone, go through the large hanger and kill the Panzerschreck troopers, as they can kill the player from behind if he misses them. Destroy the Stuka and JU52 if the player wishes. Destroy the FlaK 88 to the right after the road comes out of the large embankment and proceed onto the runway, but do not stay on the runway. The German planes that are taking off are able to ram the player and kill him, even if he shoots them down. The cannon will make quick work of the planes, but beware of Panzers in the opening hangars on both sides. When the player reaches the end of the runway, watch out for a Flak near the small buildings, across from the flaming fuel tanks. Proceed up the hill and until the player has to get out of the tank. The player can work his way up the hill, switching his DPM or PPSh-41 for a K98k if he wishes, but avoiding the MP40s. When the player gets to the tower, move from cover along the right side until the player reaches the trucks. A Panzerschreck can be used on the Halftrack that is serving as the second Machine gun. The rocket launcher can also be used to kill the gunner on the balcony. Run up to the tower after the gun is gone, and go up the rocks on the right side. Have the DPM ready with Bipod at the door and kill any Germans in sight once it is down (PPSh-41 or MP40 works too). Move through the building, picking off the Germans. In the control room, there is another door up to the top of the tower, kill the German Officer to complete the player's objective. Pick up the book on the console, downstairs, to complete the mission. 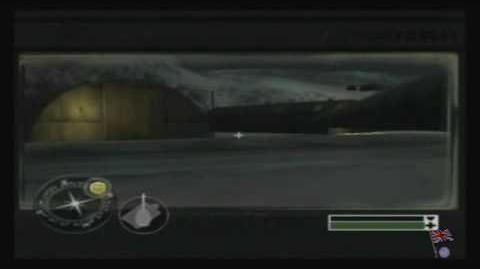 Retrieved from "https://callofduty.fandom.com/wiki/Airfield_Ambush?oldid=2517105"
Community content is available under CC-BY-SA unless otherwise noted.