airstrike_mp
In multiplayer, players who achieve a five-kill streak (killing five enemy players consecutively without dying) are given the ability to call in an airstrike to destroy their enemies.

When players call in an airstrike, they must select a target area. The aircrafts will fly in from the direction of the current spawn area of the player's team and deploy explosives in a line, although the bombs will damage enemies outside the line of attack. Once dropped, it becomes exceptionally hard to survive the airstrike. Because of this, it is recommended that the players who deploy airstrikes should stay far away from the airline, especially when playing in small maps like Shipment. As the airstrike will kill the players accidentally if they are danger close, then they won't get the Attack Helicopter and have to do everything again.

Airstrikes cannot be called in while another airstrike is in progress, regardless if the airstrike was called by teammates or enemies. Airstrikes won't damage or destroy helicopters. Airstrikes are also non-stackable; a player's airstrike option will be replaced by Attack Helicopter if the player gets two more kills without dying and without using the killstreak. Like bullets, airstrikes are capable of penetrating thin material such as metal sheets and drywall.

The SAS and USMC airstrikes are delivered by three AV-8B Harrier II jump jets. On the other hand, Spetsnaz (Ultranationalists) and OpFor use three MiG-29 'Fulcrums' which destroyed the cargo ship in Crew Expendable.

Selecting the position for the Airstrike

MiG-29 flying over map Crossfire, during the Airstrike

An airstrike in progress

The bomb in mid-air

The bomb casings left over from an airstrike.

If the airstrike is used on the map Winter Crash, planes will deliver explosive presents

The Air Strike is a cut kill streak from Call of Duty: World at War. Two HUD icons can be found in the game files, one for the inventory icon, and one for the kill icon. It is likely this was going to be the equivalent of Call of Duty 4's air strike instead of Artillery.

precision_airstrike
The Precision Airstrike allows the player to call in three F-15E Strike Eagles if playing as Task Force 141, Rangers, Navy SEALs, or MiG-29's if playing as the OpFor, Militia, or Spetsnaz, on a bombing run at the location of their choice.

Unlike the Airstrike in Call of Duty 4: Modern Warfare, the player also gets to choose which direction the jets come from. Bombs dropped by the Precision Airstrike are effective at taking out groups of players, especially near spawn points. It is also extremely effective to have a UAV in the air, as the player can locate large clusters of enemies in their strike on their own control point to kill attackers.

Inversely, players can also call one in on the enemy control point to soften defenses for a quick Shock and Awe style capture. This same strategy can be used when playing Demolition for protecting or softening up bomb sites that are outdoors.

Unlike some killstreaks, a hostile Precision Airstrike is not announced.

"Delta Airstrike on the way."
— Overlord

It will not trail a numerous number of bombs behind. Rather, the circle indicator shows where the strike will hit. The directional indicator is only to allow the player to escape SAM Turrets and Trophy Systems in a known vicinity. The same spot will be hit multiple times over a space of five seconds, and the bombs will spread just slightly.

The airstrike is great for bombarding exposed objective areas or on small maps. It is best used in conjunction with aerial surveillance, like a UAV or Advanced UAV, to recon enemy positions before deploying it, or with a Counter UAV to shut down enemy radar and deny their situational awareness. Unlike controlled aerial killstreaks, it is so fast it cannot be shot down.

The precision airstrike is much, much weaker than the Stealth Bomber of the Support class. It only drops a couple of bombs as opposed to the latter, so only a direct hit will kill enemies. Staying under shelter will generally protect a target from the bombardment, and enemies will be notified of an incoming airstrike.

The Jet of the Airstrike in-game. 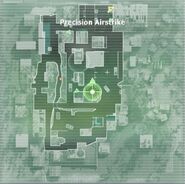 Precision Airstrike on the call-in minimap.

The Precision Airstrike returns in Call of Duty Online and functions the same as its Call of Duty: Modern Warfare 2 counterpart.

Unlike in Call of Duty: Modern Warfare 2, when a target location is selected, a blast radius indicator will be displayed.

The Precision Airstrike returns in Call of Duty: Modern Warfare with a different behavior than in previous games; the target must be designated through a binocular, thus requiring the user to have a direct line of sight with it, at which two A-10 Thunderbolt IIs will strafe the target in a quick succession after a delay of about 6 seconds. The target is also marked on friendly HUD.