"Our war is not for our faith. We fight to remove all foreign power from our soil. We fight without sorrow. We wage war without sympathy. This is the only way to live....and die. A true soldier."
— Omar Sulaman

Al-Qatala (Arabic: القتلة), later known as Al-Qatala-Aljahdid, is an anarchist terrorist organization based in Urzikstan and founded by Omar "The Wolf" Sulaman as the prominent enemy faction in the campaign of Call of Duty: Modern Warfare. It is also referenced in the backstories of several operators from the Allegiance and Coalition factions in Multiplayer.

The organisation was supposedly formed from the Urzikstan Liberation Force by Omar Sulaman in Urzikstan when he split from the ULF pursuing independence via the use of terrorism, believing the current ULF tactics were ineffective. Soon the group would set up camps and cells operating across Africa, Europe and the Middle East that accumulated large numbers of soldiers that became known as Al-Qatala. With this power, Omar under his new alias of "The Wolf" directed the Al-Qatala network to use terrorist tactics with the collective goal of causing major world powers to collapse into an untenable war, subsequently destroying the global economy.

Al-Qatala tactics are unconventional and do not distinguish between civilian and military targets with a recent terrorist attack in Piccadilly Circus and the capture of a truck containing Russian-made chlorine gas with the planning of their underground cells. Al-Qatala soldiers are ruthless and do not offer or accept surrender with those who do being mercilessly slaughtered or brutally executed, they have also been shown to use guerrilla warfare to a large extent as well such as the use of IED booby traps, the ambush of enemy patrols and perhaps most notably an underground tunnel network.

Al-Qatala is directly opposed by the Urzikstan Liberation Force, a resistance movement led by Farah Karim formed from the original Urzik Resistance after the latter collapsed fighting Barkov's forces, as well as the actions of the terrorist organization. As a result, the terror group is relentless in its pursuit of Karim and the forces under her command. Instructions are to take no prisoners, rather they are directed to kill them at all costs.

Campaign Against the West Edit

In October 2019, Al-Qatala forces secretly commanded by Hadir Karim stole a shipment of Russian chlorine gas for use in Urzikstan, the next day they carried out a surprise attack on Piccadilly Circus in London and massacred or took hostage dozens of civilians as human shields before retreating into the nearby buildings and setting up machine gun and sniper nests, inflicting heavy casualties on the London Metropolitan Police but are eventually repulsed by the S.A.S. and the Metropolitan Police with heavy casualties. An S.A.S team led by Captain John Price and Sergeant Kyle Garrick attacked a townhouse used by the AQ cell responsible for planning the attack and succeeding in killing or capturing all AQ terrorists and a laptop containing information on the Wolf’s location in Rammaza Hospital, Urzikstan for an assault by the U.S. Marines ‘Demon Dogs‘.

As U.S forces led by Sergeant Marcus Griggs and Alex pushed through the bombed out remains of Rammaza they were forced to slow down to defuse booby traps and clear neighbourhoods of any potentially hiding Al-Qatala soldiers until they were ambushed by dug-in AQ forces who detonated a roadside IED which damaged their M2 Bradley IFV and opened up with machine gun fire on the exposed Marines until Alex cleared them out and linked back up with his unit which received support from another IFV and AH-64 Apache helicopters that flattened the Al-Qatala positions and drove them inside the hospital where fighting whittled down into chaotic room-to-room CQB combat with AQ forces using human shields and booby traps to slow down the Marines with one Al-Qatala soldier was killed by Alex after failing to ambush him on his way to the Wolf.

Sulaman was eventually captured by the Marines when they stormed the hospital room he was in as he was preparing to execute a group of Marine hostages and taken away to the nearby U.S Embassy of Urzikstan but was forced to be moved to a nearby residence when militants stormed the embassy and overran the defenders who were spotted by AQ child lookouts along the way to the residence prompting Al-Qatala militants disguised as civilians to move into a nearby store and launch a small-scale attack to test the allied defences before bringing in mortar crews to flush out the defenders. The allies were overrun and had to briefly retreat to stage a counterattack which defeated the attackers and allowed Alex to destroy a mortar crew but lost control of the Wolf when AQ launched their final attack, finally capturing the residence and rescuing the Wolf. 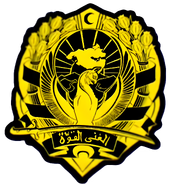 Retrieved from "https://callofduty.fandom.com/wiki/Al-Qatala?oldid=2514939"
Community content is available under CC-BY-SA unless otherwise noted.