Shadows of Evil (mentioned only)
Blood of the Dead (as spirit)

"They all look at you the same way don't they, Al? They see a weasel... a rat... You're a survivor, Al, no shame in that."
— Arlington talking to himself

Albert Arlington was born in the early 1900s and lived presumably in Los Angeles, California. On May 11th 1930, Arlington begins working with Sal and his crime family, as he was known for being a master schemer and a bank robber. Arlington was the money handler in Salvatore DeLuca's mob, and was a con man. (Billy claimed he could "con people out of their souls".) [1]

Later on, Arlington was involved in a bank heist in Los Angeles made for Sal. Arlington used explosives in order to try and open the bank vault. However, Arlington nearly blew himself up completely, and the explosives knocked him out. On October 11th, Arlington wakes up in a hospital, without the police arresting him on his involvement in the heist.

Arlington also attempted to publish a comic strip named "Icarus from Mars". Laying in the hospital, Arlington spends his time to his comic, trying to improve on the first two submissions which were denied. On October 28th 1931, he sends his comics to the editor for the third time, and it is denied again.

On January 19th 1932, the police finally arrests Arlington for his role in the Los Angeles heist, and his arrests making it to the headlines, saying Arlington has an extensive criminal history. On July 1st 1932 Al is found guilty of grand larceny, grand theft auto, arson, conspiracy and battery. His sentence is to be served in Alcatraz. Arlington arrives in August 3rd 1932.

Arlington has his journal. One of the entries that describes how the editor added comments to his comic pages, found on the main menu at the time of the release of Mob of the dead, is given in this page below. The journal, as seen by the image, contains the loading screen for Mob of the dead. In the Zombies comics, in issue 6, one can see the next page in the journal, which includes the test subject cryo-chambers (in the Ultimis/ Der Eisendrache version), Sal's and Finn's blood vials, and the phrase: "I have a secret, I must follow the plan."

On Alcatraz, Arlington, Sal, Billy and Finn devised their escape from Alcatraz. As seen in the intro cutscene, after "lights out", Arlington pretended to be ill so that the prison guard with the keys would open his cell and check on him. He stabbed the guard multiple times with a Prison Knife and stole the keys, releasing Sal, Billy and Finn. Billy supplied the other three with Python revolvers that he had smuggled out of the Warden's "private collection." However, the prison guard that Arlington thought he had killed was resurrected as a zombie. After killing him again, hordes of zombies appeared from the cells and attacked the four. While the others stood and fought the zombies, Arlington ran, but was surrounded and killed, and then sent to the Afterlife.

In-game, the crew finds themselves in a seemingly endless cycle, where they fly with Icarus only to be brought back to Alcatraz by death in Electric chair. Arlington finds his writings upon the Alcatraz map, the walls, and the wolf sketches, and the sign "no one escapes alive", however he does not remember writing any of them, and Arlington points out to the crew they cannot remember what happened yesterday. The others suspect Arlington to be the reason they are trapped in the cycle. He denies their accusations, however when talks to himself he suspects he is indeed to blame and says he cannot remember what he has done, and even says there is a truth he hides from the others.

During the Pop Goes the Weasel Easter egg Brutus reveals to the four audio logs from Stanley Ferguson, which reveal that the escape plan actually never happened and Icarus was never built, as the three mobsters argued over complications and abandoned Arlington's plan. Feeling cheated, they created makeshift weapons and lured Arlington onto the roof, and then brutally murdered him and left him to bleed out on the roof. For this, Finn, Billy and Sal were sentenced to death via the electric chair, which was followed through with on January 19, 1934.

During the Easter egg, Sal and the others relearn of the failed plan and attempt to kill Arlington once more. If they succeed, "the cycle continues" and the events of Mob of The Dead restart. If Weasel kills the other three, however, "the cycle is broken" and Sal, Finn, and Billy die for good, while Weasel goes free.

Eventually, Weasel defeats the other three mobsters. Afterwards, he takes the form of a bird (nicknamed "Icarus" by stuhlinger) and is now able to fly freely around the island, but trapped in the realm nonetheless. In Blood of the Dead, Arlington appears and steals the Kronorium from Primis. After Primis takes back the Kronorium and gets captured by the Warden, Arlington comes back and releases them from their cells. He continues to aid the four by holding the Warden off and leads them to the cryochamber safely with the help of other mobsters. In the ending cutscene, Arlington can be seen released from Purgatory along with all the other souls trapped in Alcatraz.

Arlington seems to be pessimistic and depressed most of the time. He commonly states how hopeless he thinks the mobsters' situation is. If Arlington is completely downed, the player playing as him can hear him talking to himself, and hears Al mention how he knew old promises would catch up to him. Arlington, like the rest of the crew, inquisitive often asks questions relating to how or why they are trapped in a nightmarish iteration of Alcatraz Island. His sense of humor is dry and deadpan, rarely sounding enthusiastic. He also seems to have a larger vocabulary, and uses less slang than the other three mobsters.

At the end of the Pop Goes the Weasel Easter egg, Sal, Bill and Finn can either kill Weasel or Weasel will kill them. Should Weasel die, then "the cycle continues" and the Mobsters must repeat the events of Mob of the Dead again. Should Sal, Billy and Finn die then "the cycle is broken", meaning that the story can progress and Arlington is able to walk free on the Golden Gate bridge as the last mobster left alive.

After the Most Escape Alive easter egg, Arlington, alongside the other spirits of Alcatraz, is freed from the Alcatraz Pocket Dimension.

Compared to the other Mobsters, Arlington seems to be the second youngest of the four. He wears the typical prison uniform, but also wears a dark blue jacket with elbow patches and black fingerless gloves over it. He is either balding or has had his head shaven, which he covers with a dark blue flatcap. He also has a small amount of stubble and is covered in blood like the other Mobsters. As a spirit, he appears in the form of a bird, or as Edward Richtofen describes him, a "teensy little seagull".

"I've completed the aircraft's schematics, using only components that I know can be found within the grounds. However, everything hinges on gaining the trust and help of some of the facility's most notorious residents.
They may make fun of me sometimes, but they know I can do anything if I set my mind to it. I've planned enough jobs for them in the past to know that I can convince them to join me as Icarus takes flight.
Speaking of Icarus, same old story. The Editor defaced my art, scrawling nasty little comments on every page.
When I get out, I'll show him how wrong he is...

Albert with a FAL. 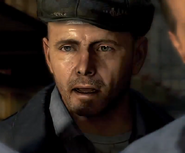 Arlington with a snub nosed Python.

Albert faking his pain to draw Stanley Ferguson in the intro.