For other uses, see Alcatraz.

Alcatraz is the second and final Blackout map. It is set around the prison on Alcatraz Island that has been previously seen on the Zombies maps Mob of the Dead, and its remake / sequel Blood of the Dead. It launched April 2nd, 2019 on PlayStation 4, and launched April 9th on Xbox One and PC.

Alcatraz Portal Quads is the only mode available on the map Alcatraz.

The mode works differently than the standard modes on the Core Map. The mode features only 10 squads of 4 players with players being deployed through randomly spawned portals over the entire map instead of a helicopter fly-pass. Players can also be redeployed at the end of a Wave Redeploy countdown up until the final collapse. The map also features Weapon Wallbuys where players are guaranteed to find new weapons every 30 seconds. 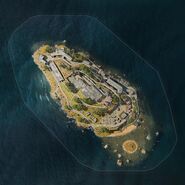