For the U.S. Navy boatswain in Call of Duty: World at War, see Rojas (World at War).

Ghost: "He's gonna get away!"
Captain MacTavish: "No he's not!"
— Ghost and Soap, as Soap is about to tackle Rojas out a window.

Alejandro Rojas,[1] alias "Alex the Red", was an arms dealer in Call of Duty: Modern Warfare 2. He lived in Rio De Janeiro, Brazil, and was protected by the local militia. He was also a contact and armorer of Vladimir Makarov, which is the reason he attracted the attention of Task Force 141.

According to information in the cutscene before "Takedown", Rojas began his career as a low level munitions clerk for the KGB, Soviet Intelligence, but quickly worked his way up the career ladder. He oversaw overseas connections with the Far East and South American trades, a buffer between government and mercenaries trading in all levels of weaponry.

Rojas then went freelance in 1997, where he went off the grid for many years, and was thought to be involved with many terrorist organizations, including Vladimir Makarov's Inner Circle. He is eventually pursued and captured by Task Force 141 when Captain John "Soap" MacTavish tackles him out a window to pin him on a car below, and interrogated for information on Makarov. The Task Force leaves him behind for dead, with MacTavish saying that "The streets will take care of him".

Rojas running on the rooftops with an AK-47.

Rojas running before being captured by Task Force 141.

An early development photo depicting Rojas captured by Captain MacTavish, note that Rojas' shirt is different and the car is not crushed.

Rojas after being tortured by Task Force 141 (still alive). 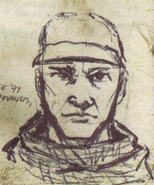 Alejandro Rojas with Vladimir Makarov.
Add a photo to this gallery

Retrieved from "https://callofduty.fandom.com/wiki/Alejandro_Rojas?oldid=2500027"
Community content is available under CC-BY-SA unless otherwise noted.