Sokolov was born in 1922. It is possible that Sokolov's home city is Stalingrad itself, as indicated by his Introduction Speech ("The sight of my home Stalingrad infuriates me."[2]), but he may be using 'home' to describe any and all of the Motherland (Russia).

His ambitions were simple; before the war broke out he worked as a Watchmaker's Apprentice and hoped that one day he would open a shop of his own. From there, maybe he would get married and start a family. However, his homeland was soon invaded by Germany and he joined the Red Army. Whether he voluntarily answered the call or was 'drafted' by the Commissars, remains vague.

Sokolov crossed the Volga on this date, surviving enemy artillery and a Stuka attack on the boat he was crossing on. He had barely gotten onto the docks and received his Mosin Nagant Ammo clip "weapon" (Red Army soldiers at Stalingrad- depending on where they lined up- were either given a rifle or a clip of five rounds, the logic being if the man with the rifle was killed, the one following him could pick up the rifle and continue the attack) when he was pressed into service under the command of Sergeant Oleg Puskov. Sokolov followed Puskov up the hill, obeying his commands to take cover at various intervals, avoiding machine gun fire and more artillery shells as a result. Eventually they made their way to a fallen smokestack tunnel which connected them to the Refinery, which was currently being contested by the opposing sides. Sokolov continued to follow his Sergeant and stay out of the path of fire until he was ordered to pick up the rifle of a fallen comrade. From there, Sokolov assisted Puskov and the other soldiers in retaking the Refinery and pushing the German forces back.

Exiting the Refinery, Sokolov and Puskov discovered more comrades engaging in a mass assault against a machine gun nest. Sokolov followed Puskov in a flanking maneuver and killed the Germans manning the nest. This led them directly to a building which faced Mamayev Kurgan, their main objective.

Sokolov, Puskov, and several fellow soldiers proceed to clear the building of Germans who had taken positions within the rooms. This eventually led them to windows overlooking the park. Sokolov then began engaging the enemy from these windows, first with the weapons at his disposal, then with the MG42 which had been brought with once the soldier operating that was killed.

Sokolov was then saved from a German sniper when Puskov pushed him out of the way, taking a fatal shot to the head in the process. Then came Lieutenant Tanya Pavelovna, who emerged from hiding and removed the sniper. At this point, Tanya ordered Sokolov to lead the charge through the park and take control of the Observation Bunker located on the top.

Sokolov led the charge, first systematically clearing out the trenchworks of German troops and then taking the Pillboxes which poured machine gun fire upon the Russians. Once all three pillboxes were secured, Sokolov led the final push towards and into the bunker, eventually securing it in Soviet hands.

Soon afterward, Lt. Pavelovna offered him a job as her 'Spotter', which he accepted readily.

Sokolov performed his main duty as Lt. Pavelovna's spotter- observing enemy movements and protecting the sniper from flanking attacks. This time, he performed his duties while Tanya removed German forces protecting a tank so that it could be destroyed by a deployed land mine.

This operation had barely been successful when they were given a plea for help from Private Mikael Kirilenko to reinforce the old Tractor Factory, which was at the time being used as a Tank Depot. Tanya went, and Sokolov followed. He followed Pavelovna and Kirilenko past a futile tank assault, which killed several Russian soldiers, and into the sewers underneath Stalingrad. From there, the three of them encountered sporadic German forces as well as several comrades. Sokolov survived these encounters and emerged from the sewers with Tanya, moving through a trench system to reach the factory.

From there he and Tanya set up positions from the top gangplank above the factory doors. Aleksandr provided advance warning to Tanya whenever machine gunners or Panzerschrecks emerged, and in what direction they came. He also provided covering fire as best as he could, even though his choice of weapon (a PPSh-41 Machine Pistol) was poor in the role required of it. The attack upon the factory was soon beaten back and he hitched a ride on the last T-34 tank being constructed once Lieutenant Nikolai Badanov and his tank crew had arrived.

Shortly thereafter, the T-34 he was riding upon developed engine problems, and so the tank crew parked someplace allegedly safe to make some quick repairs. Sokolov joined Pavelovna in seeking high ground to spot and observe any German activity that was nearby. They got activity; first in the form of German Bombers, which were followed by advancing infantry. Soon after, a Mark IV Panzer made its presence known, blasting the building which Aleksandr and Tanya were deployed in. Sokolov survived this incident, and was in good enough condition to help carry Tanya back to Headquarters.

From there, no more information on Aleksandr Sokolov is known. He is never seen nor mentioned again.

Aleksandr Sokolov is the first character the player controls in the game. He is controllable during "Not One Step Back" and "The Flag Must Fall", but from then on he becomes a non-playable character.

When player controlled, Sokolov can wield an array of weapons, both Russian and German. However, once he becomes an NPC, he is limited to the PPSh-41. He is also unkillable when an NPC. He and Tanya are the first playable characters to be an NPC, seen in third person well and talk.

Sokolov, taking a look at the remains of Stalingrad as he approached on a row boat. 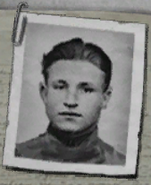 A photograph of Sokolov seen in the file selection screen. 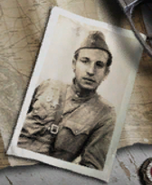 Sokolov in his uniform, shortly after being conscripted and shortly before fighting in Stalingrad.