"Alex" is a character featured in Call of Duty: Modern Warfare and one of its three playable protagonists. He is an operative of the Special Activities Division of the CIA embedded with the Urzikstani Liberation Force and operates alongside Farah Karim as a liaison to the organization. "Alex" was also added as a Warcom operator of the Coalition faction with the release of the Season Three of content for the game.

Not much is known about "Alex"'s early life and history. Also known by the callsign "Echo 3-1", Alex served in the Delta Force before surrendering his former rank and history of special ops military service to the Special Activities Division of the CIA in 2013.[1]

During the next six years in the SAD, Alex lived a series of assumed identities to achieve "sensitive" objectives wherever he is needed, often operating autonomously, training, advising and arming allies to act as interpreters, pathfinders and soldiers. Alex valued direct contact with local militias where he can track both allied and enemy intentions to help advise appropriate action.

Through 2017, Alex's and his teams played key roles in ensuring definitive victories against emerging terrorist networks. As the SAD is permitted to execute missions against enemies of the state, without consulting the Pentagon or White House, Echo 3-1 has been involved in multiple actions to assassinate enemy leadership.

On October 24, 2019, Alex was assigned on a mission in Verdansk, Kastovia, to secure and retrieve a shipment of chlorine gas from a depot belonging to Russian General Roman Barkov before it could be delivered in Urzikstan. The mission was overseen by Colonel Norris of the United States Marine Corps and Alex's handler, Case Officer Kate Laswell. Supported by a team of Marine Raiders, Alex launched a strike of white phosphorous on the depot before entering the site. After the team encountered heavy resistance from both mercenaries and Spetsnaz forces hired by Barkov, Alex confirmed the presence of chlorine gas and prepared to extraction.

The operation turned out to be a failure, however, as the team was ambushed by insurgent forces when they were leaving the facility. The insurgents killed the Marines, stole the gas and left Alex wounded.

A day after the failed mission, Al-Qatala, a terrorist organization, launched a terror attack in Piccadilly Circus in London, which was contained by Kyle Garrick of the Metropolitan Police Service and John Price of the SAS who was briefed by Laswell after the gas was stolen.

On October 26, Laswell sent Alex to the Urzikstan city of Aqtabi to find and secure the stolen Russian gas with help from the Urzikstan Liberation Force. Price advised Laswell and Alex to use his name if they wanted to meet the Militia leader, Farah Karim, as Price had helped her in the past. Alex met with Farah and her brother Hadir. He informed Farah about the stolen gas and she promised to help him only if he helped them fighting the occupation of Urzikstan by the forces of General Barkov.

Attack on the airbase[edit | edit source]

Before the ULF could launch their attack on the nearby russian military airbase, Farah and Alex needed to create a diversion in Aqtabi to pull security away from the base. Using the tunnels beneath the city, they reached a safehouse where Tariq was waiting for Farah with disguises. Farah and Alex used them to infiltrate the area. Alex planted explosives supplied by Hadir on two helicopters. The detonation created chaos in the vicinity with more Russian soldiers rushing towards the site. As they were fleeing the scene, Farah and Alex were detected but managed to escape the russian forces. Farah realized Tariq has been killed when the door of their safehouse was left open. They then entered back the tunnels to safety.

Several hours later the Urzik Militia regrouped outside of the russian airbase in Al-Raab. Farah started the assault with mortar fire destroying the south wall of the base before her soldiers rushed inside. Alex managed to capture a weapon armory using improvised drones and Molotov cocktails. The ULF reached the main hangar and Alex captured a second armory as Russian reinforcement arrived. An unmarked AH-64 Apache sent by Laswell and piloted by Viper 1-1 arrived in time to save Farah's forces. With the destruction of the Forward Operation Base of Barkov, the Russian air capability in Urzikstan was temporarily limited allowing Western forces to move through the country.

Capture of the Wolf[edit | edit source]

Following a raid on a London townhouse by John Price and Kyle Garrick, the location of Al-Qatala's leader, Omar Sulaman, also known as the Wolf, was found in a hospital in Rammaza. In the morning of October 28, Alex and several Marines of the Demon Dogs unit, led by Sergeant Marcus Griggs, launched an assault against the hospital occupied by Al-Qatala and captured the Wolf before he could kill Marines that was taken prisoner during the fight. Sulaman was then brought to the US Embassy in Sakhra for interrogation.

Defending the US Embassy[edit | edit source]

Later that day, Al-Qatala's second in command, Jamal Rahar, also known as the Butcher, rallied insurgents in front of the Embassy calling for the release of the Wolf. As Price and Kyle Garrick arrived via helicopter to extract Sulaman, the insurgents breached through the gates of the embassy while also shooting at the helicopter, leading to its crash on the embassy roof. Price and Kyle rushed through the building as Al-Qatala was slaughtering staff and their families, including a children shot by the Butcher, as well as the Marines stationed in the embassy. They met Alex, Farah, Hadir and the Wolf in a saferoom in the basement. They, however, needed a keycard used by the US Ambassador Harris who was killed during the attack. Kyle guided Stacy Davidson, Harris' assistant, to safety so she could give them the card.

The group then moved to the Ambassador's residence to wait for extraction. While outnumbered, Alex and the team managed to repel the attackers, forcing them to retreat. The Wolf, however, managed to escape after Al-Qatala breached a wall of the residence.

The next day, as the Wolf and the Butcher went into hiding, the team separated in two groups. Price and Kyle started to clear house to house in Sakhra with the help of the ULF. Alex, Farah and Hadir prepared an ambush near Darus, an abandonned village at a crossroad of Tariq Almwat, a highway that was bombarded by Russian forces during the initial invasion of Urzikstan 20 years prior. The highway was the only road to escape to the mountains.

After the ULF set traps along the highway, Alex engaged the scouting forces of Al-Qatala sent by Sulaman. Fighting occured between the Militia forces and the rest of Al-Qatala. Eliminating suicide trucks, mortar crews and snipers, Alex and the ULF managed to cripple the enemy movements until the Russians intervened, bombing Al-Qatala and sending an armored force to intercept the Wolf and eliminate all resistance, which included Farah's forces.

Outnumbered and desperate, Hadir asked Alex to help him getting more weapons in his truck. The weapons were revealed to be the stolen chlorine gas. Hadir used the gas against the Russians, killing everyone in the area. As Alex and Farah were incapacitated, Hadir apologized to them as he was desperate to defeat the Russians so he decided to steal the gas in Verdansk. Some time later, with the gas dissipating, Alex and Farah were rescued by Price and Kyle. Farah told them she didn't know Hadir was responsible for the stolen gas.

Back at the base of operation, Laswell informed them that Hadir made contact with the Wolf and Rahar who were now in possession of the chlorine gas. Farah no longer considered Hadir as her brother but just another terrorist of Al-Qatala and was willing to participate in the operation to capture him. During the briefing, they learned that Hadir, Rahar and Sulaman went to what was believed to be the Wolf's stronghold in Takkari located in the Aqrus Mountains.

Later that night, Price and Kyle led the assault on the Wolf's compound and learnt he was hiding in the tunnels beneath the compound. Alex and Farah entered the tunnels but a booby trap triggered as they descended which collapsed the tunnel entrance, cutting the duo from the outside world. Alex and Farah slowly progressed through the tunnels but, eventually, some Al-Qatala soldiers discovered them and cut the power, leaving them in the dark. They continued to walk through the tunnels fighting Al-Qatala and avoiding tripwire traps. As the two slowly made their way to the other end, Hadir spoke to Alex, asking why Farah was brought along with them, to which Farah explained she came willingly. Hadir pleaded for them to leave, and to trust Al-Qatala, but Farah instead berated Hadir for his decisions.

At some point, Alex got separated from Farah when the floor beneath him broke apart. Al-Qatala soldier ignited an erupting fire forcing Alex to hastly climb upward as the Sulaman was giving a small speech about his views of Western treatment and conflict. As the fire quickly ascended, Alex was saved by Farah who led him to the room where the Wolf fled. They killed Sulaman before he could activate his bomb vest. But the vest was still armed and with only 20 seconds from exploding. Following Farah's instructions, Alex disarmed the bomb.

With Omar Sulaman dead, Al-Qatala has no field leader, but with the gas unaccounted for, the United States were forced to assign the Urzikstan Liberation Force as a terror organization, a decision that the team disagreed with, even forcing Price to threaten Colonel Norris over the decision. Disappointed and outraged with the decision, Alex decided to defy Laswell's orders and attached himself with the ULF, to Farah's surprise.

Few days later, Price and Kyle arrived in Urzikstan to meet with Farah and Alex. The day before, Price acquired intel and details on the location of Barkov's chemical facility during the capture of Hadir in Barkov's residence in Moldova. Knowing that a direct attack of the chemical plant would be seen as an act of war, Price convinced Farah to launch an attack against the gas factory.

The next day, on November 3, the ULF, accompanied by Price, Kyle, Farah and Alex with air support provided by Laswell, stormed Barkov's factory. With explosives and detonaters supplied by Nikolai, Price and Kyle planted the charges on the pipelines while Farah and Alex made their way to the main furnace. During the fight, Alex's detonater was destroyed. Knowing Barkov was on the site, Alex chose to fight for something he believed in and was willing to sacrifice himself by rigging the furnace from the inside, allowing Farah to pursue Barkov. After Farah killed Barkov, Alex detonated the charge, destroying the entire facility.

Alex managed to survive the explosion but did not walk away unscathed, losing his left leg and having it replaced with a prosthetic. Charged with desertion after defying his orders, Alex remained in hiding for five months until Price recalled him to duty in early 2020. Now part of the Warcom unit of the Coalition, Alex was sent by Price to a Classified location in order to assist Lieutenant Simon "Ghost" Riley as the situation in Verdansk turned into chaos after the release of massive gas clouds in the city and the dissolution of Armistice.

An official image of Alex in Call of Duty: Modern Warfare 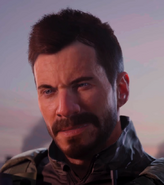 "Alex" hides his face with a mask.

"Alex" with Charly and Talon

Retrieved from "https://callofduty.fandom.com/wiki/Alex_(Modern_Warfare)?oldid=2554467"
Community content is available under CC-BY-SA unless otherwise noted.